Recognition of our fight for quality 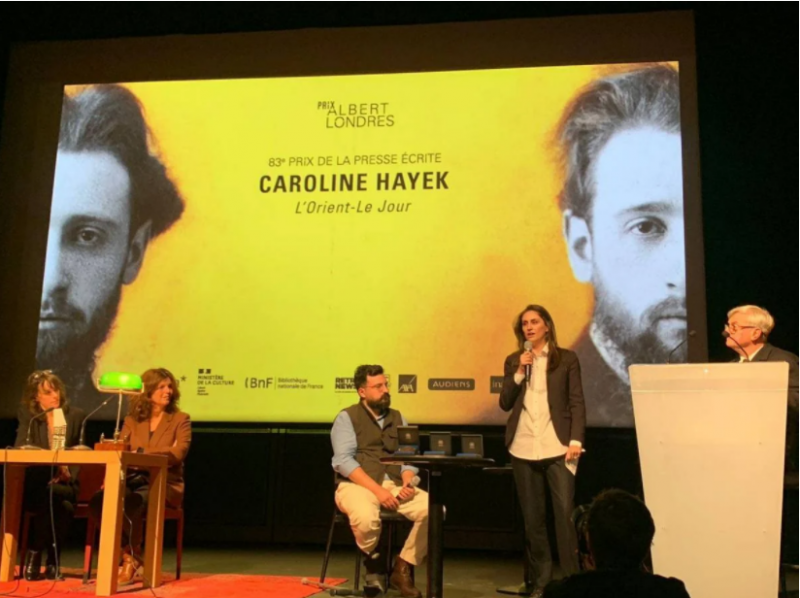 Our journalist Caroline Hayek giving a speech during the presentation of the 83rd Albert Londres Prize which was awarded to her, on Nov. 15, 2021. (Credit: DR)

Pride and emotion. These are probably the two words that best describe what we all feel today within this group.

On Monday evening, our journalist Caroline Hayek was awarded the Albert Londres Prize.

Created in 1932, in homage to the French journalist who was the father of modern reportage, this prize is the most prestigious journalism award in France, dedicated to great reportage.

Caroline won the prize for a series of articles she wrote in Beirut in the aftermath of the Aug. 4, 2020 explosion in the capital's port, a tragedy that took so many lives.

For this edition of the prize, 90 entries were submitted in the print media category., a record number. Among the nine selected were journalists from Le Figaro, Le Monde and Libération, including Wilson Fache, whose reports have been regularly published in our columns for years now. Last year, the prize went to Marwan Chahine, who was nominated for his reports on the "thawra" in L'Orient-Le Jour.

This prize is a recognition of the great work done by Caroline Hayek in a difficult context. A Lebanon in crisis, a battered capital, tears, anger, despair and shock everywhere: Caroline Hayek was living in this maelstrom. She did not come to cover this traumatic event and then return to the comfort of a functional country. Caroline lives in Lebanon, and she reports on all the crises and storms that this country is going through but also lives them in her private and daily life.

This prize is also, more globally, the recognition of the quality of the work of an entire newspaper, because a newspaper is above all, and necessarily, relentlessly, a collective adventure, from the workshop to marketing, including the editorial staff, proofreading, financial and human resources management. Each person, in his or her own department, contributes his or her own stone to build this beautiful edifice every day.

This award is the recognition of our commitment to quality, to the production of honest work, a work based on the defense of values, and only that. In this editorial office, we have journalism, in its noblest form, at heart. And this is what allows us to produce articles whose quality is recognized by people like those who form the jury of the Albert Londres Prize.

How many times have we reminded you that we are one of the few independent traditional media in this country? We owe this independence to our shareholders who, in these exceptionally difficult times, give us exemplary support without sticking even a finger in the editorial machinery. We owe this independence to our readers. This quality journalism, which has just been awarded, is the result of their commitment to us.

This prize has a special resonance for us today. Do we need to remind you how difficult life has been in Lebanon for more than two years? In addition to their work, our journalists, all the members of this group in fact, are constantly struggling in a difficult daily life, between power cuts, hyperinflation, shortages of all kinds, anxiety about the future.

Many of them could have left, to go elsewhere, in better conditions, to practice their profession. They stayed. Most of them are young. They are the future of this newspaper. Because what is a newspaper, if not the people who make it?

This prize awarded to Caroline is also for them, all these committed women and men who are convinced that what they do every day has a meaning that, in the end, goes beyond them, beyond us all.

In three years, L'Orient-Le Jour will celebrate its centenary. Witnessing so many evolutions, so many events in Lebanon and in the region, this newspaper has never stopped questioning itself, developing itself, reinventing itself. And it is well on its way to continue for a long time. With a compass, for which it has just been rewarded: a total commitment to a free, independent, quality and committed press.

Pride and emotion. These are probably the two words that best describe what we all feel today within this group.On Monday evening, our journalist Caroline Hayek was awarded the Albert Londres Prize.Created in 1932, in homage to the French journalist who was the father of modern reportage, this prize is the most prestigious journalism award in France, dedicated to great reportage.Caroline won the...