The Druze leader stressed that he does not wish to join any political front against Hezbollah, saying that he’s “in nobody’s pocket.” 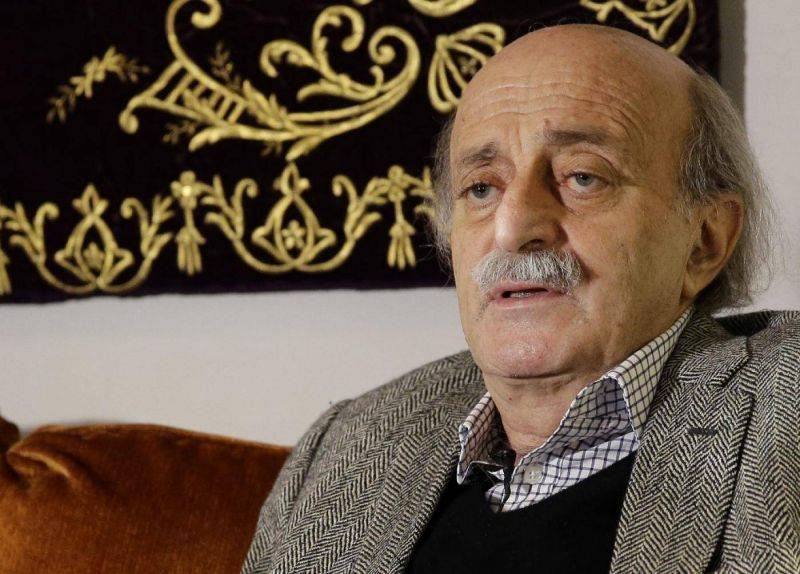 In an interview with L’Orient-Le Jour, Progressive Socialist Party leader Walid Joumblatt said he does not wish “to join any political front against Hezbollah,” in response to the debate sparked over his harsh statements against the Shiite party.

On Monday, the Druze leader made scathing comments against the party of God, saying “I have been too patient with Hezbollah,” accusing the pro-Iranian party of wanting to lead the country to economic collapse, notably by undermining the situation of Lebanese in the Gulf who risk being expelled following a diplomatic row between Saudi Arabia and Lebanon.

“My position was a spur-of-the-moment reaction to a harsh reality. We were suffocating and we had to cry out,” Joumblatt told L’Orient-Le Jour.

Since the Oct. 14 Tayyouneh clashes between supporters of Hezbollah and the Amal Movement on one side and armed men allegedly belonging to the Lebanese Forces on the other, the political scene in the country has been greatly repolarized.

In late October, Saudi Arabia escalated its position, announcing it was withdrawing its ambassador from Beirut and asking Lebanon’s envoy to leave Riyadh, and banning imports from Lebanon, after comments made by the Lebanese information minister criticizing Saudi Arabia's involvement in the war in Yemen. Other Gulf countries followed suit, severing diplomatic ties with Lebanon.

The fallout of Information Minister George Kurdahi’s comments came to reinforce the polarized situation in the country, shifting, once again, the national debate around Hezbollah’s influence over the Lebanese state.

While the current context appears to be conducive to creating a political front against Hezbollah, Joumblatt said he refused to sign up for this approach.

“I’ve had enough confrontations,” said the man who has been engaged in Lebanese politics for over 40 years.

Fearing “the return of civil war,” the PSP leader seems, at least for the moment, to have shut the door on a strategic alliance with LF leader Samir Geagea in the face of Hezbollah.

Meanwhile, the latter, backed by Riyadh, appears to be ready to lead a broader front against the Shiite party.

“I am in nobody’s pocket, and no one can take me for granted,” Joumblatt said, in a message he wished to convey to many, but most notably to Hezbollah, in a clear desire to distance himself from the party after having, in recent years, sought to come to a compromise with it.

“Some of my positions converge with Hezbollah’s, which suits it. But when you oppose its interests, the party has you immediately in its crosshairs,” Joumblatt said.

The PSP leader is all for preserving relations between Lebanon and the Gulf countries and believes that “it is not acceptable to provoke them and push them to isolate us, because this goes against the popular, historical and political interest of Lebanon.”

Joumblatt also sought to convey a message to those who saw in his latest remarks against Hezbollah an alignment with Riyadh’s policy in Lebanon.

Joumblatt, however, dug in his heels, stressing that “the policies against Lebanon’s interest have gone too far.”

‘Hariri holds a special place in my heart’

A few months out from the legislative elections slated for March 27, Joumblatt is getting ready to toss his hat in the ring.

“It is imperative that the elections are held on time,” the PSP leader said, expressing concerns over attempts to sabotage the vote.

In the Chouf area, a Druze stronghold, Joumblatt will, once again, forge an alliance with the LF against the Free Patriotic Movement of Gebran Bassil, with whom “there is no common denominator whatsoever,” according to the Druze leader.

“If I were in Geagea’s shoes, I would have shown up before the court,” he said. After the deadly Oct. 14 fighting, the Military Court called LF leader in to give testimony.

The Druze leader is also keen to maintain an alliance with the Future Movement of Saad Hariri, although relations between the two men have been inconsistent since the October 2019 uprising.

“The alliance with the Future Movement and the Sunnis is historic and it is out of the question to give it up,” Joumblatt said.

He added, “It is true that we had some political differences with Saad Hariri, but he and his family hold a special place in my heart. I had indeed criticized his handling of certain issues, but that does not mean undercutting our strategic relationship.”

Hariri, who has been abroad for weeks, is expected to return to Beirut soon to announce his party’s roadmap for the upcoming elections. Meanwhile, Joumblatt recently met with MP Bahia Hariri to prepare for the elections.

Like the rest of the traditional political parties, the PSP needs its allies to avoid losing ground given the population’s current deep mistrust in the ruling class.

Joumblatt, who was a target of the Oct. 17 uprising slogans, is clearly on the defensive.

The PSP head did not appreciate the flagship thawra (Arabic for revolution) slogan — “Killun yaani killun,” Arabic for “All of them means all of them” — deeming it to be unfair and inconsiderate of the struggles of the past.

“My place in power has never been as significant as that of the others,” he said, calling on his detractors to provide evidence of the accusations hurled at him.

‘There’s nothing in Lebanon to be optimistic about’

Paradoxically, the PSP head, known for his knack for geopolitics, believes that regional issues must be put aside, in light of the need to focus on “reaching an agreement with the International Monetary Fund and the World Bank to unblock international aid that would allow Lebanon and its inhabitants to breathe.”

“The goal today is to have a minimum level of stability, nothing more,” Joumblatt said.

Lebanon’s Prime Minister Najib Mikati announced on Tuesday that the figures for the financial losses from Banque du Liban and the country’s commercial banks had finally been unified and sent to the IMF; however, he did not specify any amounts.

Meanwhile, IMF spokesman Gerry Rice said on Nov. 5 that the preparatory technical discussions between Lebanon and the organization’s experts had “begun.”

“There is nothing in Lebanon or the region to be optimistic about,” the Druze leader said firmly. For him, the land of the Cedars is losing its identity and is “threatened with disappearance.”

In an interview with L’Orient-Le Jour, Progressive Socialist Party leader Walid Joumblatt said he does not wish “to join any political front against Hezbollah,” in response to the debate sparked over his harsh statements against the Shiite party.On Monday, the Druze leader made scathing comments against the party of God, saying “I have been too patient with Hezbollah,” accusing the...