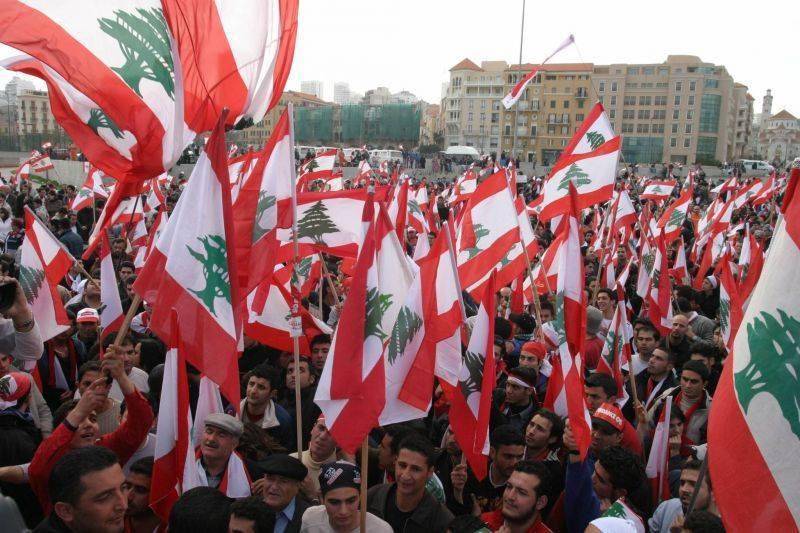 For the voters who support the thawra, the real battle is for change. (Credit: Wissam Moussa)

Lebanese abroad are “jubilant” as Antoine Menassa, the president of the Association of French-Lebanese Businessmen put it. Parliament has approved a decision allowing expat voters to cast their ballots for all the 128 MPs of parliament in the 2022 elections, instead of only six seats as the text of the law previously stipulated.

The diaspora vote, which was implemented for the first time in 2018, had seemed to be threatened this time around before Parliament’s decision.

Under the original text of the 2017 law that was supposed to be applied in the 2022 elections, Lebanese abroad could vote only for six MPs to represent them.

But some Lebanese expats feared that their votes could be canceled “even after voters are registered at the embassies,” according to Diana Abbas, a member of the Sawti initiative, which is working on bringing expats together to participate in Lebanon’s elections and is affiliated with Impact Lebanon, a non-governmental organization campaigning for the emigrants’ involvement in development in Lebanon.

The registration period for diaspora voters wishing to cast ballots in the upcoming parliamentary elections from overseas has been set as Oct. 1–Nov. 20. Some one million emigrants are eligible to vote in 2022, according to statistics released by Sawti.

During the 2018 elections, only 82,965 Lebanese expats registered with their respective embassies, with just 46,799 of them actually casting their ballots — a very low turnout.

A portion of the ruling political class appears to be wary of the diaspora voters for various reasons.

Hezbollah and Amal, for instance, speak of unequal opportunities for candidates because of the American and European sanctions against Hezbollah.

But there is above all the Oct. 17, 2019, uprising, the Aug. 4, 2020, Beirut port explosion, and more recently the political efforts to thwart the investigation into the blast, and the crippling economic crisis plaguing the country — all of which are reasons that could push expats to vote for candidates running against the ruling class.

Notably, a number of Lebanese abroad did not hesitate to return home in 2019 to take part in the anti-establishment demonstrations that swept the country.

“It is important for Lebanese abroad to vote in their respective constituencies because we want to contribute to making a change in Lebanon,” says Abbas, who is based in London.

Like the Sawti initiative, Meghterbin Mejtemhine (Arabic for “United Expats”)* is a diaspora platform that is active in 10 cities around the world and is working on encouraging Lebanese abroad to register at their respective embassies.

“We were a little dubious at the beginning, because the election date and the emigrants’ voting methods were not yet known. We believe that the ruling class was keeping things vague and unclear in a bid to sabotage the emigrants’ vote,” said Marc Tueni, a member of Meghterbin Mejtemhine, based in France.

“The Lebanese living abroad have been galvanized more than ever over the past two years. The uprising shook many expatriates who had left the country against their will and long for change. The diaspora is now reclaiming its sense of belonging to Lebanon,” he explained.

Tueni said that the Meghterbin Mejtemhine group has been coordinating for over a year with political groups not affiliated with the traditional political parties, such as the Lebanese National Bloc, Citizens in a State, Li Hakki and Beirut Madinati.

For all of these groups, giving green light to Lebanese emigrants to vote for all the 128 MPs was a real victory.

“This is a victory for democracy,” Menassa said, calling on Lebanese voters abroad to hurry to register with their respective embassies.

Many expats, however, still prefer to travel to Lebanon to cast their ballots. This is the case of Van Meguerditchian, a civil society activist based in France, who wants to be sure that his vote will be counted.

“There are concerns about election fraud when you vote from Lebanon, let alone voting from abroad,” he said. Back in the 2018 election, Meguerditchian came on a special trip to Lebanon just to cast his ballot.

“This is the minimum I can do: come back to Lebanon to support those who are threatened in their own areas and are afraid to vote as their conscience dictates,” he said.

Another Lebanese expat, a doctor living in France, who spoke on condition of anonymity, told L’Orient-Le Jour, “I plan to vote in Paris, if they let us. I am pessimistic, because I think the political class can always manage in one way or another to torpedo the elections. The Lebanese are likely to vote for candidates from the thawra groups, which does not suit the political class.”

While many young expats who have just reached the voting age of 21 are eager to go to the ballot box for the first time, others remain cautious.

Melissa Kreiker, a 21-year-old student who arrived in France two months ago, is getting ready to register her name at the Lebanese Embassy in Paris. She does not intend on missing her appointment.

“I will be voting for the first time in 2022, and this is important. I believe that every one of us must be part of the change. I have no doubt that we can make a difference. In fact, it has already started,” Kreiker said.

Maya, another 21-year-old student who has just arrived in Switzerland, does not share the same opinion.

“Even if we vote for all 128 MPs, I don’t think it will change much. The independent political groups are not united, and the traditional parties are likely to return to power. I won’t vote unless I am sure that my vote will be useful. I want to be sure that this will be a democratic process,” she said.

Maya added that she is no longer under any illusion about the dire situation in her country and intends to stay in Switzerland after she finishes her studies.

“I had been planning for a while to leave to continue my studies abroad, and I must say that the situation at home encouraged me to do so. I don’t think I’ll be returning to Lebanon anytime soon,” she said.

*Due to a translation error, this article originally mistakenly stated that Meghterbin Mejtemhine is run by Diana Abbas.

Lebanese abroad are “jubilant” as Antoine Menassa, the president of the Association of French-Lebanese Businessmen put it. Parliament has approved a decision allowing expat voters to cast their ballots for all the 128 MPs of parliament in the 2022 elections, instead of only six seats as the text of the law previously stipulated.The diaspora vote, which was implemented for the first time in...