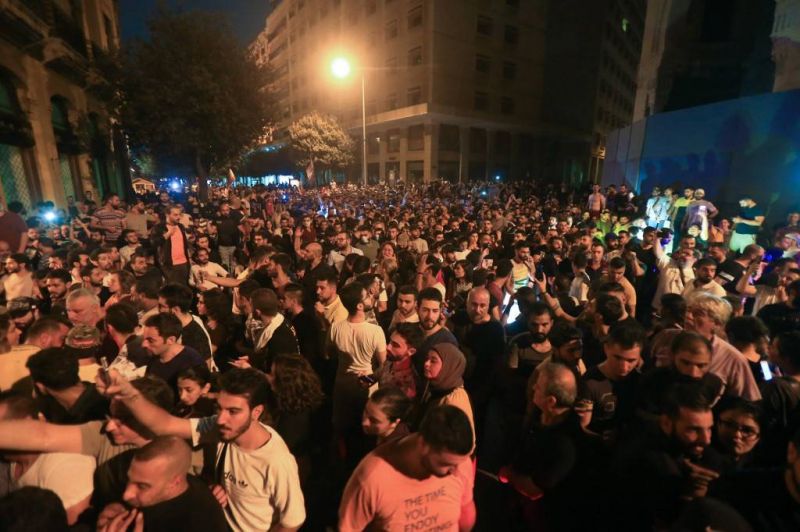 Demonstrators gather during a protest against an Oct. 17, 2019 government decision to tax calls made on messaging applications. (Credit: AFP)

Two years ago, on Oct. 17 2019, the people took to the streets across Lebanon with an unprecedented sense of unity, calling for the downfall of the entire political and economic power structure that has been governing the country since the end of the armed conflict in 1990. The trigger for this collective mobilization was the government’s decision to impose yet more taxes as part of austerity measures — most notably a “WhatsApp tax,” which would charge for what is a worldwide free-of-charge call service.

To understand people’s reaction better, it is important to review the buildup that led to the October protests: in 2018, over $11 billion was pledged to Lebanon at the CEDRE International donor conference in Paris to boost Lebanon’s economy. The aid, however, was conditional on the implementation of long-awaited reforms, but the government was not even able to meet for months because of political feuds between its members. In September 2019, the prime minister declared an economic state of emergency. The following month, on Oct. 13, over 100 wildfires spread across Lebanon’s forests. The authorities were unable to bring the fires under control — mainly because of the lack of maintenance of helicopters — and ended up relying on support from local and civil society groups to help contain the blazes. Meanwhile, supporters of various political parties were involved in sectarian and political armed clashes in different regions — such as the shooting in Kfar Matta in Mount Lebanon involving the convoy of then Minister of State Saleh Issam Gharib against the backdrop of a visit by the then Foreign Minister Gebran Bassil at the end of June 2019 — causing casualties and propagating frustration and fear across Lebanon. That is just a taste of the daily despair people were waking up to in the year leading up to the October 2019 protests. The “WhatsApp tax” was just the straw that broke the camel’s back.

During the protests, people on the streets stood in front of TV cameras and made their demands heard. We all identified with a woman saying, in the first days of the protest movement, that she could not afford to pay her children’s school fees and a man crying because he was unable to pay for his wife’s cancer treatment. To the people, the “WhatsApp tax” was merely emblematic of the political establishment’s failure to find long-term structural and sustainable solutions to address the underlying weaknesses of the crumbling economy. Instead, the elite were pursuing the same misguided course of shielding themselves from accountability for systemic corruption and mismanagement.

The October protest movement was not the first time the people of Lebanon showed unity in calling for socio-economic justice in the post-Civil War period: in 2015 widespread protests in response to the mismanagement of Lebanon’s waste crisis also crossed the barriers of identity politics, sectarianism and political affiliations.

During the last two years, and along with accusations of having ulterior motives or serving geopolitical agendas, the economic and political authorities tried to contain the impact of the October protest movement by implying that it was the protests themselves that triggered for the ensuing economic collapse and the accompanying deterioration in the standard of living, instead of the other way around.

In fact, economists consider the early signs of an imminent collapse appeared as early as 2011, when economic growth predictions were negative, which turned out to be true. In 2014, remittances and other dollar inflows declined sharply, against the backdrop of a negative balance of payments. And news started emerging in the few months before October 2019 of large US dollar deposits being transferred out of Lebanon, while other, often small, depositors were and still are not allowed free access to their accounts.

In October 2019, the people took to the streets after a series of calamitous economic shocks: private banks stopped allowing customers access to their dollar-denominated savings and current accounts; the Lebanese currency lost its engineered stability for the first time in 30 years; the unemployment, inflation and poverty rates, as well as all other socio-economic indicators, were showing Lebanon heading towards economic and social turmoil.

It did indeed turn out to be an unprecedented collapse, considered probably the third worse economic crisis worldwide in 150 years, according to the World Bank. In March 2020, the government defaulted on Lebanon’s foreign currency (Eurobond) debt for the first time in history. This was clearly not due to a few months of demonstrations, but rather decades of unsustainable debt management and lack of practical economic solutions.

It is against this backdrop and under these conditions that people across Lebanon demanded social justice across a range of human rights, including their rights to education, health and work, together with calls for a new civil status code, equal nationality rights for Lebanese mothers and the right to truth and justice for the families of the disappeared. In short, people called for fundamental structural and political change, based on better enjoyment of civil, economic, political and social rights and accountability for corruption, mismanagement and violence.

During the five months of protests from October 2019 to March 2020, former fault lines were replaced with new demarcation lines: the widely chanted slogan “killun yaani killun” (Arabic for “all of them means all of them”) — referring to all Lebanon’s political parties — meant that, for the first time, regardless of each party’s political history and sectarian affiliation, regardless of each protester’s political opinion and sectarian identity, the Lebanese people had united as “us” against a ruling “them.” This was the deeper and true legacy of the “WhatsApp tax” protests.

Two years ago, on Oct. 17 2019, the people took to the streets across Lebanon with an unprecedented sense of unity, calling for the downfall of the entire political and economic power structure that has been governing the country since the end of the armed conflict in 1990. The trigger for this collective mobilization was the government’s decision to impose yet more taxes as part of austerity...