What’s next for the Beirut port explosion probe? 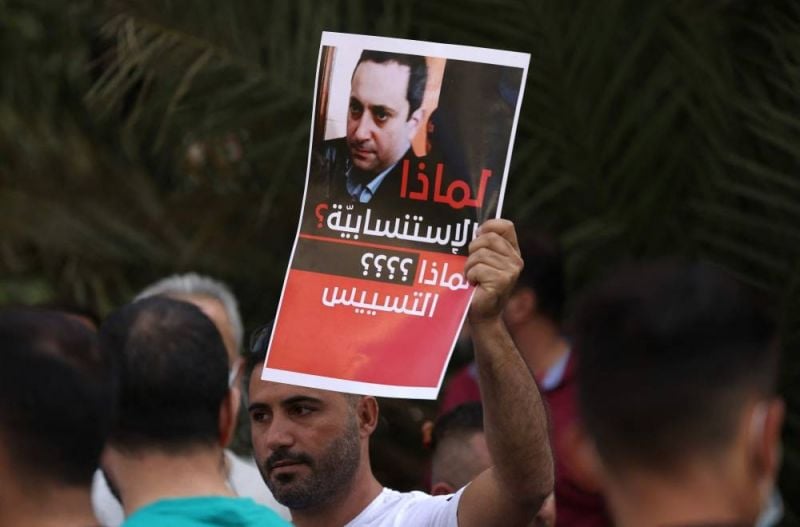 A protester carries a picture of Judge Tarek Bitar, the Beirut blast lead investigator, during a gathering to demand his dismissal. (Credit: Joseph Eid/AFP)

Tension over the Beirut port explosion investigation escalated into some of the worst sectarian clashes the capital has witnessed in years, after shooting erupted in Tayyouneh during a Hezbollah and Amal Movement protest to denounce what they called the “politicization” of the probe. At least seven were killed and more than 30 were wounded.

The strong show of opposition to the investigation by political parties has cast doubt over the probe’s future, but for now at least, with the Court of Cassation’s decision to repeatedly reject complaints filed by politicians, the investigation continues.

“There are several possibilities … But the Court of Cassation is the only court that can remove Bitar and it seems there is momentum in favor of [the judge],” Legal Agenda head Nizar Saghieh told L'Orient Today.

The Lebanese Judges Association said in a statement on Friday that it will no longer accept requests to remove Bitar. “The judiciary has said its word … Whoever has ears should listen well to the voice of the law and stop tampering in the last bastion of the concept of the state,” the statement said.

Bitar's investigation was briefly suspended on Tuesday after Amal MPs Ghazi Zeaitar and Ali Hassan Khalil filed a petition to the Court of Cassation for the judge’s removal. It was the third attempt by the legislators to have Bitar replaced.

The judge has faced tremendous pressure from Amal and its ally Hezbollah in his attempts to prosecute the two legislators. The parties, including Hezbollah leader Hassan Nasrallah, have accused the judge of politicizing the probe, while Zeaiter and Hassan Khalil have refused to turn up for interrogations.

Now that the Court of Cassation has allowed the investigation to continue, many are questioning whether Bitar will be able to accomplish anything or even hold the officials accountable.

For one, time is running out for Bitar to pursue legal action against the MPs, who will be protected by legal immunity once Parliament enters its regular session scheduled to begin on Oct. 19. Not counting the weekend, this would effectively give Bitar almost no time to bring the MPs in for questioning.

But Saghieh argues that the most important thing now is that the investigation continues.

“What is very important is for Bitar to stay in the investigation to continue his work. The investigation doesn’t only rely on these MPs and their interrogation. There are other witnesses and other evidence that can be collected,” Saghieh said.

“It might be an obstruction to a complete investigation, but hopefully this will not prevent him from having a full picture of what happened.”

Amine Saliba, a constitutional lawyer, pointed out that Bitar would be able to question the MPs once again when Parliament ends its session on Dec. 31.

“There are several different outcomes at this point,” Saliba said. “Maybe Bitar will resign. We really can't know right now.”

Mounting tension over the investigation is also threatening to catapult Lebanon’s government into renewed political crisis, barely a month after it was formed to help steer the floundering country out of economic collapse.

Lebanon’s third cabinet meeting under new Prime Minister Najib Mikati was adjourned midway Tuesday after ministers were reportedly unable to agree on whether to take an official position on Bitar’s conduct. The session has been postponed indefinitely until ministers are able to reach a consensus on how to proceed.

In an interview with al-Mayadeen TV on Tuesday evening, Hassan Khalil said that Shiite ministers may resign if cabinet does not make a “proper decision” about the investigation.

Both Hezbollah and Amal have previously withdrawn their ministers from cabinet during times of political turmoil. In 2011, resignations of 11 ministers from Hezbollah and its allies toppled the Lebanese government of then Prime Minister Saad Hariri ahead of expected indictments against the Shiite group over the 2005 assassination of Hariri’s father, former Prime Minister Rafik Hariri.

The row threatens to undermine Mikati's government, formed after more than a year of political deadlock between Lebanon’s fractious leaders while the country spiralled further into economic crisis.

According to Article 95 of Lebanon’s Constitution, “Sectarian groups shall be represented in a just and equitable manner in the formation of the Cabinet.”

But according to Wissam Laham, a constitutional law professor at Saint Joseph University, the resignation of all Shiite ministers would not constitutionally force Mikati's government to dissolve.

“Legally and constitutionally, they can keep going. The president and prime minister can nominate and choose other Shia ministers. But the question is whether they can continue politically. Especially with Hezbollah and Amal I doubt it,” Daher said.

Saghieh said that there was hope to be found for Bitar amid cabinet’s disagreement.

A Baabda source told L’Orient Today that President Michel Aoun’s stance on the matter is that the decision on Bitar’s role must be made through Lebanon’s relevant judicial establishment, like the Higher Judicial Council.

“Cabinet does not have the power to remove Bitar because they did not appoint him,” the source said.

“The president is saying: if you have an issue with this judge, there are establishments that are responsible for this decision. The courts, the Higher Judicial Council. The Court of Cassation has declined [complaints to remove Bitar],” the source added.

Aoun has not asked Bitar to resign following Thursday’s clashes, the source said, adding,“If he wants to resign, it would be his own decision.”

When contacted by L’Orient Today on Friday afternoon, spokesperson for the families of the victims of the Beirut port explosion Ibrahim Hoteit said he was unable to comment as the families were observing a 24-hour media silence following the clashes.

However, overnight Friday a video circulated on social media showed Hoteit calling for Bitar’s resignation. It was not immediately clear whether Hoteit had recorded the statement under duress or of his own free will.

Kayan Tleis, the head of the Committee of Families of Beirut Port Martyrs, told L’Orient Today on Saturday morning that he did not know whether these were Hoteit’s opinions but that the families “don’t want politics and we want nothing to do with it. We are one family. At the end we just want justice.”

BEIRUT — Moments before deadly street clashes broke out in Beirut on Thursday, Lebanon’s highest court dismissed a legal complaint to remove Beirut port explosion investigator Judge Tarek Bitar, allowing the probe to move forward.Tension over the Beirut port explosion investigation escalated into some of the worst sectarian clashes the capital has witnessed in years, after shooting erupted...