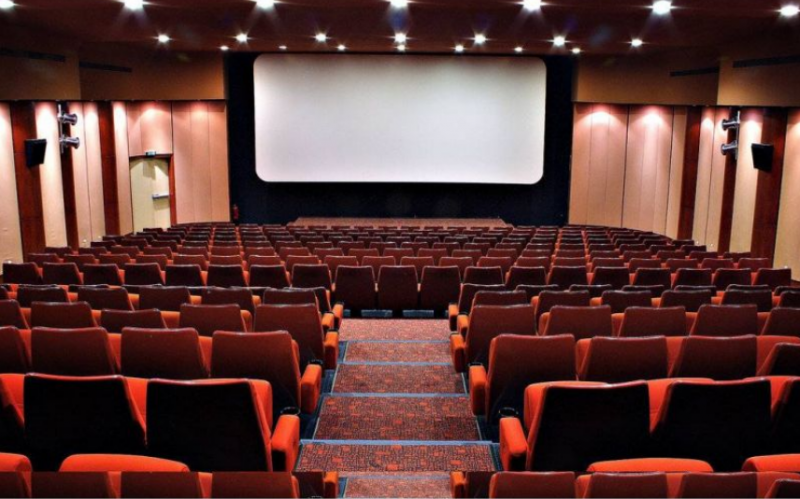 An empty theater at the Metropolis Empire Sofil cinema in Beirut. Films and plays require preapproval from General Security in Lebanon. (Credit: DR)

BEIRUT — When a play put on by a group of university students at a popular Hamra theater was halted earlier this month under pressure from a security agency, it was just the latest in a series of film and theater productions to run afoul of Lebanon’s censorship system.

The production, Tenfiseh, (“Vent”) was part of an annual festival called Mishkal at the Masrah al-Madina theater, in which students chose a story or script to adapt into their own, largely improvisational performances.

The play was stopped by General Security ahead of its second performance on the basis that its director had not obtained a permit for the performance from the agency’s censorship bureau, which is authorized to review plays and films before they can be shown publicly in Lebanon.

Ayman Raad, an attorney representing the play’s director, told L’Orient Today that an audience member who watched the production’s first performance had reported it for allegedly insulting President Michel Aoun.

General Security has maintained that the issue was not content-related but simply a matter of a missing permit. In a statement on Twitter, the agency stated that the director, Awad Awad, had put on the play “without going through the legal path of the information office in the General Directorate of Public Security,” adding that some observers had “portrayed the issue as an infringement on public liberties, while it is an affirmation of their preservation.”

Regardless of whether the play was targeted for its political content or for procedural reasons, activists and lawyers argued that the fact that General Security has the authority to approve or deny artistic productions in the first place is in itself problematic and represents an outdated censorship regime.

What are the laws around censorship of film and theater productions in Lebanon, and how are they applied?

What is the legal framework?

The laws governing censorship in Lebanon are mainly the “Publications Law” established in the 1960s, which covers newspapers, scripts, books and written content, and the 1994 “Audiovisual Media Law” for all content that runs on broadcast channels, said Raad, who has studied the country’s media laws.

“Local and imported arts alike submit to these laws, which haven’t been amended [since they were put in place],” Raad said.

In a collaborative study on censorship in Lebanon, the attorneys Nizar Saghieh, Rana Saghieh and Nayla Geagea wrote that General Security practices censorship by preapproving theater productions “based on [Legislative Decree No. 2] passed in 1977 [during the Civil War] which explicitly gives it the right to fully reject or partially approve the staging of a play without directives or guidelines,” and it has not been amended since then.

As for films, artists submit both scripts and completed films to General Security’s oversight office, which responds with either an approval, an approval with amendments or disapproval, Raad said.

The censorship study authors noted that prior to filming, General Security reviews movie scripts and may cross out sentences or scenes and require directors to sign off on the changes before giving permission for the film to be produced. The agency also grants permits for films to be screened after production. General Security’s authority to do this is based on the agency’s internal directives and has “no legal foundation,” the study argued.

Ayman Mhanna, executive director of the Samir Kassir Foundation, which advocates for media freedom, told L’Orient Today that the fact that General Security acts as the sole censorship authority in Lebanon breaches a 1947 law that stipulates that a committee of ministerial representatives should oversee pre approval procedures.

A General Security spokesperson declined to comment and instead pointed L’Orient Today to the agency’s statement on the Tenfiseh case.

Which kind of productions require a permit?

Preapprovals are required for all professional productions, including paid, unpaid, private and public productions, Raad said.

Student productions and productions done on school campuses do not fall under the law. Had Tenfiseh been staged at a university, General Security would not have had the right to interfere, Mhanna said.

He added that the law does not cover “newer forms of theater productions, such as improvisational ones.”

Because Tenfiseh is improvisational in its nature, the team organizing it had no script or text that it could have submitted to General Security, Raad said.

“We clarified to General Security that the production was performed by students and that it was improvisational,” he said. General Security’s argument was that the director should, in this case, still submit a script for review and the actors would then be held accountable for the lines they improvise, Raad said. He argued that this approach applies “when the work is scripted but has room for improvisations rather than when the whole work is improvised.”

Web series and web films are also not mentioned in the outdated laws and therefore do not fall under General Security’s censorship review purview, Mhanna said. Taking advantage of this loophole in 2012, the Skeyes Center for Media and Cultural Freedom (SKeyes), an organization established in 2007 by the Samir Kassir Foundation, launched “Mamnou3” (“prohibited”), a web-series that parodies General Security’s censorship department.

How have censorship rules been applied in the past?

Raad and Mhanna both said there are no set criteria for preapprovals, but there are general themes that can be used to censor productions. Productions that are found to raise sectarian tensions, disturb the civil peace, offend modesty or undermine religion and the state may be censored.

For films, censorship tends to be based on political, religious and moral value considerations. For instance, General Security has banned scenes deemed offensive to friendly states or in praise of enemy states such as Israel, and scenes that are considered damaging or offensive to religion, the censorship study found. They have also censored snippets that portray drugs and sexual content considered immoral, the censorship study found.

Legislative Decree No.2 does not include censorship criteria for theatrical productions, the study continued. This gives General Security more freedom to exercise its discretion.

Tenfiseh is one of many theater productions that have been halted under the system. In 2010, security agents stormed Lasri Rahim’s play Oublie la Voiture! at Masrah al-Madina and banned it until sexual words deemed obscene were removed from the script.

As for films, Raad recalled General Security banning an Egyptian movie, Mawlana, from Lebanese cinemas in 2017 on the basis that it undermined religious rites.

In some cases, as in the case of a 2007 play called How Nancy Wished that Everything was an April Fool’s Joke, the censorship study noted, rather than outright banning the production General Security effectively denied permission by delaying preapproval, because the law does not specify a time frame for the agency to finalize permits for theater productions.

However, the case with Tenfiseh is distinct, because given its nature as a student improvisation, it shouldn’t have been required to submit to General Security and the dialogues couldn’t have disrespected the head of state, Raad argued.

Awad was not the work’s scriptwriter but merely the supervisor and director of a student play production, he said. The play was based on a book written by the lawyer and scriptwriter Osama al-Aareq in the 1970s called Edrab el Haramiye, or “The Thief’s Protest.”

“The book talks about the dictatorship systems of the world, with no ties to any place or time. Thus it is not meant to target any Lebanese official,” he said.

How could the system be reformed?

Following the play’s cancelation, Awad gave a statement denouncing preapprovals on artistic productions because “they limit freedom of expression and art-related freedoms.”

The main issue in Lebanon, Raad said, is that the censorship laws are maintained by a security apparatus instead of civil bodies specialized in the issue.

For example, the Tenfiseh director was questioned by a bureau that investigates cases on terrorism and smuggling, Raad noted, highlighting that the bureau is not specialized or even legally supposed to deal with censorship issues. General Security’s national security office intervened on the basis that the play insulted the president. Thus, the case was being treated as a case that involves the head of state rather than a permit issue.

Raad argued that an oversight office should be formed at the Information and Culture Ministry rather than General Security, “because theater is not a crime — it is culture.”

Mhanna said that requiring artists to get preapprovals is a burden on them and with no doubt constitutes censorship.

He suggested an amendment to the law “allowing all art forms to be presented without preapproval so that freedom of expression is maintained, and allowing audience members to file complaints that would be then studied by a specialized body.”

BEIRUT — When a play put on by a group of university students at a popular Hamra theater was halted earlier this month under pressure from a security agency, it was just the latest in a series of film and theater productions to run afoul of Lebanon’s censorship system.The production, Tenfiseh, (“Vent”) was part of an annual festival called Mishkal at the Masrah al-Madina theater, in...