An expanded meeting was held on Sept. 9 at the Lebanese Order of Physicians in Beirut, in the presence of several ambassadors to Lebanon and representatives of international organizations. 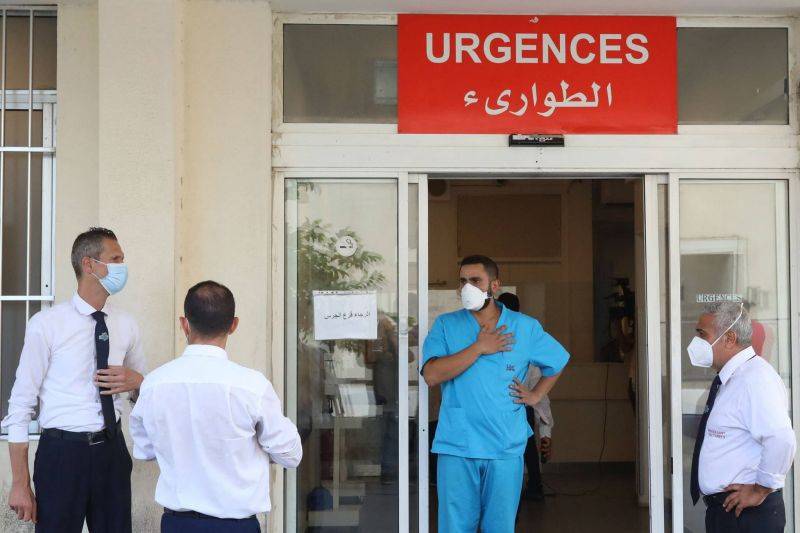 Due to fuel oil shortages and staff departures, many hospitals are struggling to maintain their services. (Credit: Anwar Amro/AFP)

For the first time since the start of the crisis, a meeting was held at the Lebanese Order of Physicians in Beirut on Thursday to tackle the many challenges facing the hospital sector and to take stock of the health situation in the country.

The meeting was attended by ambassadors to Lebanon of Australia, Switzerland, Spain, Poland, Egypt and Turkey, as well as by representatives from the World Bank, the World Health Organization, the United States Development Agency (USAID), the French Development Agency (AFD), the Order of Malta in Lebanon and a delegation from Doctors Without Borders.

The head of the Lebanese Order of Physicians, Charaf Abu Charaf, and Suleiman Haroun, the president of the private hospitals syndicate, were also present at the meeting, which is likely to be followed by other similar gatherings as the situation evolves.

During his address to the diplomatic audience gathered, Haroun painted a particularly grim picture of the hospital sector’s situation, in anticipation of the imminent ending of government subsidies on fuel, medicines, medical supplies and equipment.

“The state is not destroying itself only, but also the private sector, starting with the hospital sector to which the Health Ministry owes the equivalent of $2 billion. With a minimum wage corresponding to $1 a day, the country is no longer able to bear the cost of health care […], nor the cost of importing advanced equipment from the West — something that allowed Lebanon’s to become the hospital of the Middle East ,” Haroun said.

“Doctors and nurses are no longer able to provide a decent life for their families. Today, with the progressive lifting of subsidies, we are heading for disaster,” he added.

Haroun continued, “In the short term, much of the population will no longer be able to afford the cost of medical care, while the state is unable to rise to the challenges. Many patients will risk dying at home, or even in hospitals.”

“This is why we need help, not only to save hospitals, but to ensure decent care for the population, for the most vulnerable in particular […] away from the state’s bureaucratic slowness,” he said, lashing out at the authorities.

Haroun continued, “The Lebanese people are angry. We are here because of a ruling class that is sticking to distorted electoral laws and has driven the country to disaster.”

In a radio interview the previous day, Haroun had warned against “a health disaster in the next two weeks,” if the fuel subsidies are removed and medical equipment imports are set at LL8,000 to the dollar, arguing that this would make access to health care even more challenging.

Numbers speak for themselves

Numbers speak louder than words and they were provided by Mohammad Hamdi, the general secretary of the private hospitals syndicate and an expert in hospital administration.

According to Hamdi, the hospital occupancy rate stands at 55 percent, but with the closure of certain services, the hospitals’ admission capacity has dropped by 30 percent.

These figures are significant even if we take into account the negative consequences of COVID-19 on the hospitals’ situation.

The cost of dialysis, previously set at $13 per session, has doubled and stands now at $26, according to Hamdi. Meanwhile, the general health budget is 12 times lower than the required budget, and the National Social Security Fund’s reimbursements have lost 90 percent of their value, which reflects the collapse in the national currency’s purchasing power.

In his introductory remarks during the meeting, Abu Charaf underlined the excellent cooperation relations and mutual dependence between the Order of Physicians and the private hospitals syndicate.

“The time for mutual aid is here. There is no longer a moment to lose. International organizations and bodies must intervene and directly support, financially and materially, the health, education, banking and social sectors in crisis,” Abu Charaf said.

Lebanon’s private hospital sector has decided to turn to the international community for help in a bid to save its health mission and ensure its survivalFor the first time since the start of the crisis, a meeting was held at the Lebanese Order of Physicians in Beirut on Thursday to tackle the many challenges facing the hospital sector and to take stock of the health situation in the...