Amid a countdown to the school year's kickoff, teachers wonder whether they will be able to give lessons

With public schools set to resume classes on Sept. 27, teachers overburdened by their salaries’ devaluation and fuel shortages ponder how and whether they will be able to go back to work. 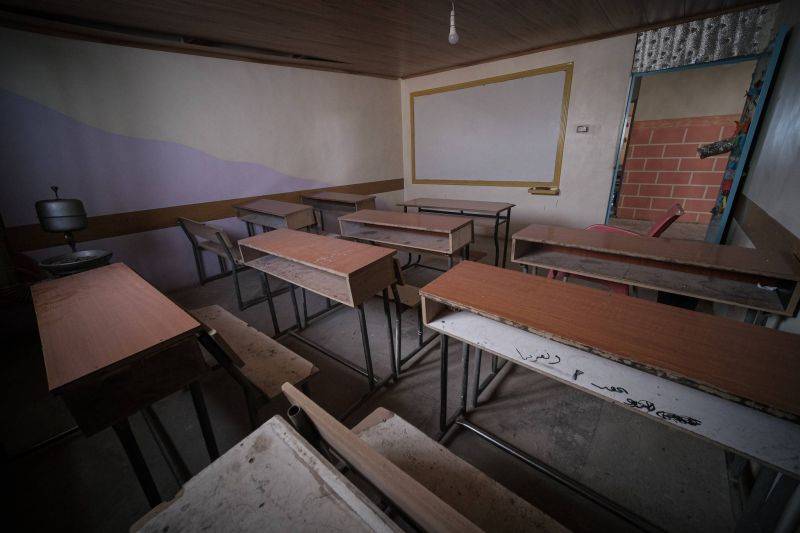 Laura,* a math teacher in Iqlim al-Kharroub, commutes 50 kilometers a day back and forth to give lessons at a secondary school. Since caretaker Education Minister Tarek Majzoub announced two weeks ago that public schools will resume classes, Laura has been wondering how she is going to get to work.

Not only have gasoline prices been steadily increasing in recent months as the country has moved to end fuel subsidies, but also gasoline is increasingly difficult to get ahold of across the country. As a result, never-ending queues have formed in front of the stations that are still open. The average price of 20 liters of gasoline is currently LL130,000, up from about LL40,000 in June.

But this is little comfort for Laura, who estimates that her daily commute costs, on average, a minimum of LL40,000 worth of gasoline. Although she has 20 years of experience teaching, she earns a monthly salary of LL3 million, which is now a small sum after the lira has lost more than 90 percent of its value in two years. Laura noted that her salary is now worth less than $170 when converted at the current parallel market rate, down from $2,000 previously.

"The teachers are right"

Hilda Khoury, who directs the Education Ministry’s guidance and counseling department, says that discussions to find solutions are underway among the education, finance and energy ministries.

“The teachers are right; their salary is no longer enough. We are trying everything possible to find solutions to gasoline problems and to review salaries.”

But the decision to resume classes in the absence of a crisis management plan has infuriated the teachers.

“It is insane to announce the opening date for the school year before having settled the transportation issue,” Nisrine Chahine, the head of the public sector contractual teachers committee, says.

“Neither gasoline shortages, the lifting of fuel subsidies nor the hyperinflation is a new problem. It is unfathomable to see that no crisis plan has been put in place two weeks before the start of the school year,” says Nada,* a philosophy teacher at a secondary school in Beirut.

Caretaker Education Minister Tarek Majzoub added in the press conference two weeks ago that in-person attendance will be four days a week, meaning that teachers and students will have to make four round trip commutes a week.

“The last time I went to fill up the car tank, I waited for seven hours in the queue at a gas station, without even being able to get a drop of gasoline,” Nada, who will need to fill up the tank every 10 days if she only counts the commutes from home to work, says furiously.

While civil servant teachers are faced with a difficult situation, it is worse for contractual teachers, who do not benefit from the daily transportation allowance’s hike.

“Daily transportation costs me LL40,000. I cannot pay for it out of my own pocket while our salary no longer covers any cost,” Omar, 39, a math teacher at the Bab al-Tabbaneh official school and a father of two children, aged 6 years and 1 month, says.

“If they cannot introduce a transportation allowance without enacting a new law, why don’t they increase our pay?” he adds.

Nawal, a contractual Arabic language teacher in the Bekaa Valley, goes to her school in Hermel by bus. Previously, she used to pay LL50,000 per month for her commute. “The commute will cost me LL300,000 from now on. Where am I going to get the money from?” Nawal, who has been teaching for almost 30 years, says.

Not going back unless their rights are obtained

During the month of August, the secondary school teachers association surveyed teachers about resuming the school year. “The majority of people who responded to the form indicated that they did not intend to go back unless their rights are obtained in advance,” says Nazih Jebbaoui, the association’s head.

Only some 3,600 teachers filled out the form, while the others were unable to do so “due to power outages and internet disruptions,” which is a symbol of the deleterious situation in which teaching staff find themselves.

The contractual teachers sing from the same hymn sheet. “The school year could actually kick-start without the teachers; we are already not taking part in the administrative tasks, including the students’ registration,” Chahine says.

The association is demanding a salary increase that would raise the standard of living and cover the transportation and gasoline fees. The same goes for the contractual teachers, who are a majority in the teaching staff and who have additional demands related to their status, including to be paid on a monthly basis rather than every three months, getting higher pay and benefitting from transportation allowances.

No electricity or equipment

The impact of fuel shortages is not limited to the teachers’ living conditions and transportation. It will inevitably expand to working conditions in schools, which are not spared from power cuts.

Caretaker Education Minister Majzoub said that 122 public schools will be equipped with solar panels, although the network is made up of more than 1,200 public institutions, according to the most recent figures.

The teachers’ problem is twofold. They are managing their own financial hardship and that of their students’ parents, which in turn has a knock-on effect. That is because the crisis is casting its net far and wide.

The United Nations Economic and Social Commission for Western Asia indicated in a policy brief last week that at least 74 percent of the population is now living below the poverty line, compared with 25 percent in 2019.

"I enter the classroom shattered and come out devastated"

Many are the teachers’ and students’ daily sufferings. “I saw a teacher leaving a classroom, depressed, because he had to choose between either buying 3 kilos of bananas for his children or yogurt for his wife, and he could not afford both,” Chahine recounts.

Amal, a contractual teacher at a school in Mount Lebanon, struggles to find her mother’s medication, which costs her LL500,000, while she is paid on a three-month basis. For her part, Nada continues to exhaust her small savings, as only LL300,000 of her salary is left after the electricity bill payment is made.

“We can no longer afford basic food, medicine and education for our own children with our salaries ... and we are being asked to teach! There is no way we can go back to school as if nothing is happening,” Jebbaoui says.

Moreover, the teachers have concerns about their ability to pass on knowledge to children, who have also come under the crisis. The UN Economic and Social Commission for Western Asia noted that inflation soared to 281 percent from June 2019 to June 2021. A United Nations Children’s Fund report published in July found that 77 percent of households do not have enough food or money to buy it, and that 30 percent of children go to sleep on an empty stomach.

* The first names have been changed at the request of the people concerned.

Laura,* a math teacher in Iqlim al-Kharroub, commutes 50 kilometers a day back and forth to give lessons at a secondary school. Since caretaker Education Minister Tarek Majzoub announced two weeks ago that public schools will resume classes, Laura has been wondering how she is going to get to work.Not only have gasoline prices been steadily increasing in recent months as the country has moved to...