After yet another political snub, the head of state refuses to admit defeat

After being rebuked in Parliament on Friday, the Aounist camp continues to stick to a conspiracy theory centered on alleged efforts to sabotage the president’s tenure 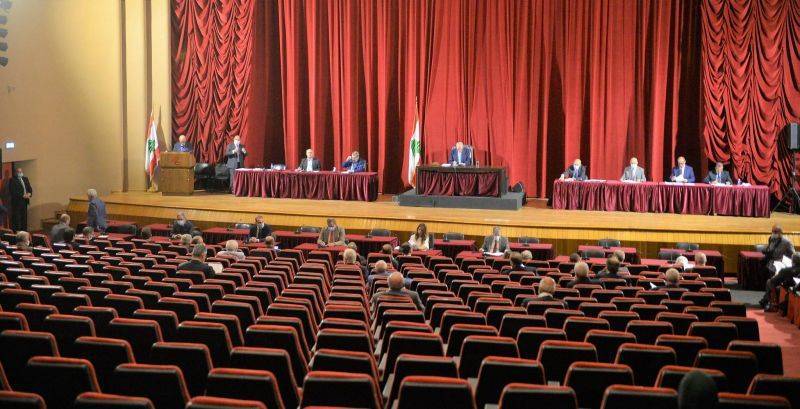 Parliament convened on Aug. 20 at the UNESCO Palace in Beirut. (Credit: Lebanese Parliament)

Alarmed and frightened, the Lebanese are looking at yet another standoff in the long-standing feud between President Michel Aoun and Banque du Liban Gov. Riyad Salameh.

The president, who vowed that BDL’s fuel subsidy would not be removed under his tenure — a hugely unpopular move as the country grapples with an unprecedented economic crisis — ended up capitulating to the reality on the ground.

This comes after Aoun previously tried in vain to mobilize the caretaker government and Parliament in service of his cause.

A day after Saturday’s meeting at the Presidential Palace in Baabda, when an agreement was reached among Aoun, Salameh and other officials to partially end fuel subsidies, which would increase fuel prices by about two-thirds, the Energy Ministry announced a new price list.

This appears to be far from a lasting solution to the fuel crisis that Aoun has become embroiled in, much to his dismay.

Supported by his political camp, the Free Patriotic Movement, the president had tried to shirk responsibility for the decision, suggesting that he was forced into approving the partial end to subsidies.

Racing for time and facing popular discontent and street movements that have grown less and less controllable, Aoun did what he does best: blame his opponents for his shortcomings.

In this case, it was Salameh and all those who support him — in particular, a parliamentary majority that dismissed a letter he sent to MPs on Friday requesting to hold a session to discuss an earlier decision by the governor to end fuel subsidies altogether, apparently in the hope of rescinding it.

At the end of a session that dragged for more than an hour, during which the various parties traded accusations, Parliament indirectly returned the ball to the president’s camp, deciding to call for the government’s rapid formation, the accelerated implementation of a ration card project to support the country’s most vulnerable and a market free from the grip of hoarders — all things Aoun did not want to hear.

With the exception of Hezbollah, the majority of MPs supported the governor’s decision, backed by Parliament Speaker Nabih Berri, who had just won a new round in the battle against Aoun, his all-time adversary.

Before addressing Parliament, the head of state tried on Aug. 13 to strong-arm the caretaker government into carrying out his demands, asking outgoing Prime Minister Hassan Diab to convene the cabinet in an “exceptional” meeting to rescind Salameh’s decision.

“Taking care of day-to-day affairs in the narrow sense of the term does not prevent the cabinet from meeting in the event of extremely urgent circumstances,” Aoun said.

No longer wanting to be part of a tug-of-war as the country collapses, Diab turned down the president’s request.

In fact, ever since resigning in the aftermath of the 2020 Beirut port explosion, the caretaker prime minister has been refusing to convene the cabinet, claiming that his government is now limited to managing day-to-day state affairs and that convening for other purposes would be unconstitutional.

With the support of several parliamentary groups, Salameh had also pledged that he would not reverse the decision, which he had reportedly been mulling over for a long time.

Salameh had indeed warned regularly for nearly six months that the central bank’s funds were drying up and that it could no longer subsidize goods that were being smuggled to Syria and strengthening the fuel mafia’s grip on the market.

“The truth is that there is seemingly a plan in place designed to obstruct any proposal, idea or project, as if there is intention to prolong the Lebanese people’s suffering and humiliation in the queues at the gas stations,” Aoun said on Saturday following the meeting to discuss the fuel crisis at Baabda Palace. He added that he has not spared any means to search for a way out of the crisis.

Following the heated debate in Friday’s parliamentary session, Gebran Bassil, an MP for Batroun and the head of the Free Patriotic Movement, which Aoun founded, openly accused his political opponents of doing everything in their power to “overthrow the president of the republic” and “deal a blow” to his political bloc and to “the resistance” at a later stage.

He said Salameh’s decision is part of “a plan by external forces to place Lebanon under economic siege,” referring to the US and nodding at Hezbollah, which backed his tirade against the governor’s decision. This was Bassil’s way of staging a counterattack against the majority who regarded the delayed government formation as the primary reason behind the worsening crisis in Lebanon.

Since the Aounists were defeated in Parliament on Friday, the president has become aware that he no longer has the time to play games, and that he has little room to maneuver in forming a new ministerial team.

This helps explain the pause in direct talks over the cabinet’s lineup with Prime Minister-designate Najib Mikati, continuing the push-and-pull of choosing ministers with Mikati through the presidency’s director-general, Antoine Choucair. However, according to some analysts, although Aoun suffered this second loss, he will not give up and will instead demonstrate even more steadfastness and demands in his talks with Mikati.

His statement on Saturday and Bassil’s statement the day before are the first round of a new battle that the president is gearing up for to avoid securing a minority in the new cabinet.

Thus far, the hurdles have remained unchanged, although Baabda circles and sources close to Mikati cite some grounds for hope. According to sources close to the premier-designate, some portfolios have already been allocated. Remaining difficulties will be overcome “as long as the two sides have the will to do so,” the sources said.

The pending issues involve the ministers suggested for the contentious energy and justice portfolios. L’Orient-Le Jour learned that Salim Jreissati, who is close to the president, has his own ideas about who should head the Justice Ministry, while Bassil hopes to have an FMP-affiliated figure follow in the footsteps of the former ministers Caesar Abou Khalil and Nada Boustany and lead the Energy Ministry.

Another persisting obstacle is the extent to which the so-called independents are actually independent.

According to Mikati’s circles, it is difficult to determine whether some names proposed to head up non sovereign portfolios are truly as independent as they are thought to be.

Additionally, when it comes to the two remaining Christian ministers, who will appoint them — Mikati or Aoun? It is worth recalling that this Gordian knot ultimately led Saad Hariri to recuse himself from forming a government.

This article was originally published in French in L’Orient-Le Jour. Translation by Joelle El Khoury and Sahar Ghoussoub.

Alarmed and frightened, the Lebanese are looking at yet another standoff in the long-standing feud between President Michel Aoun and Banque du Liban Gov. Riyad Salameh.The president, who vowed that BDL’s fuel subsidy would not be removed under his tenure — a hugely unpopular move as the country grapples with an unprecedented economic crisis — ended up capitulating to the reality on the...