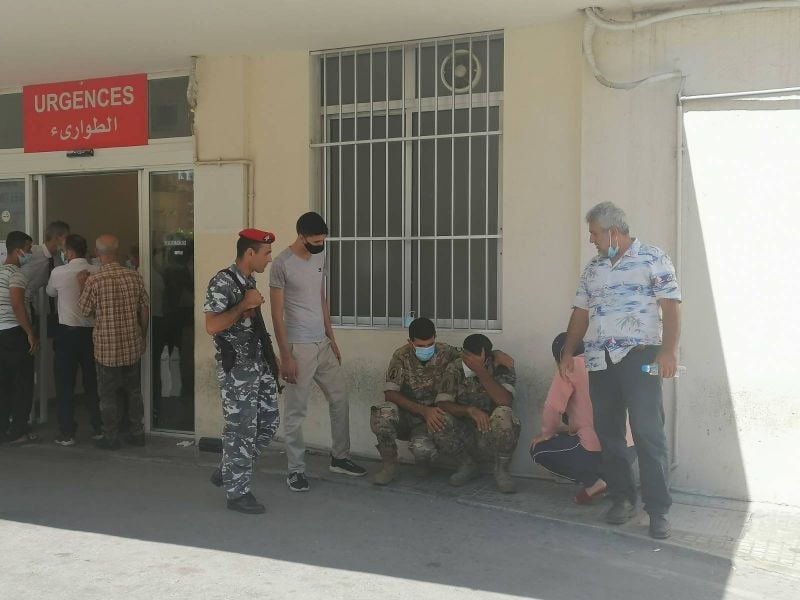 A solider cries outside the entrance to the Lebanese Hospital Geitawi were victims of the Akkar fuel truck explosion were being treated Sunday. (Credit: Abby Sewell/L'Orient Today)

BEIRUT — Lebanon’s worsening fuel crisis came to a tragic — and perhaps inevitable — climax Sunday, when a tanker holding tens of thousands of liters of illegally stored fuel that had been uncovered in Akkar exploded as desperate residents flocked to fill up their tanks.

The explosion in the village of Tleil early Sunday morning killed at least 28 people and injured dozens more, many of them soldiers in the Lebanese Army, overwhelming the country’s already struggling hospitals.

Some 60,000 liters of gasoline and 40,000 liters of diesel were stored in the warehouse that exploded Sunday, Charbel Aboud, a former mayor and current municipality member of Tleil, told L’Orient Today.

The Lebanese Army said in a statement that its members had been distributing the confiscated fuel to local residents when the explosion took place. Officials did not say what had sparked the explosion; reports from different sources pointed to either a lighter or gunshots.

In the aftermath of the blast, political factions traded blame, while emergency personnel and families of the injured rushed from hospital to hospital to find a place for those hurt in the explosion. Other residents of the area lashed out in rage, setting fire to the house of the owner of the land on which the fuel was stored. The Lebanese Army said in a statement that it had arrested the land owner’s son but did not give further details.

“If the situation goes on like it is, worse than this will happen. The country is going to explode,” Jaafar, a soldier whose brother — also a military member — was injured in the explosion and whose brother-in-law — another soldier — remains missing, told L’Orient Today as he waited for his brother outside of Lebanese Hospital Geitawi, where a number of the burn victims were being treated.

Akkar has been particularly hard-hit by the fuel shortages. Before the gas crisis reached Beirut in April, most fuel stations in Tripoli and the north had already closed, with dozens of black market fuel sellers hawking their wares on the side of the highway. Since then, the situation has only worsened.

The central bank announced Wednesday that it will end subsidies on fuel imports, heralding a potential fivefold increase in the price of gasoline and diesel and prompting most of the remaining gas stations in the country to close.

Marwa al-Cheikh, whose brother, a Lebanese Army soldier, was also being treated in Geitawi, told L’Orient Today that when the army began distributing the confiscated fuel for free, people flocked from around the area to fill up because they were desperate.

Along with distributing the fuel, Cheikh and others said some soldiers had taken shares for themselves. A typical soldier’s monthly salary is currently worth about $63 at the parallel market exchange rate, and many are struggling to pay for transportation to and from their duty stations.

A video circulating on social media showed scores of Akkar residents stopping a military bus to call on the soldiers not to report to work in protest. The video showed some soldiers leaving the bus.

The National News Agency reported that the “Akkar Revolutionaries” group had initially discovered the contents of the warehouse.

In a statement posted on its Facebook page, the group blamed the government, and particularly Hezbollah, for the “economic collapse and deterioration of the security situation, the continuation of the policy of draining the treasury and stealing depositors’ money through systematic theft operations and also organized smuggling of fuel to Syria and the storage of subsidized materials.” It also claimed that the warehouse storing the illicit fuel had been “protected by the president’s political team.”

Future Movement head Saad Hariri, who recently resigned from the prime minister-designate post amid tensions with President Michel Aoun and a standoff over the cabinet lineup, posted on Twitter that “if there was a state that respects people, its officials would resign, starting with the president of the republic to the last person responsible for this neglect.” Four out of the seven MPs in Akkar are members of the Future Movement bloc.

For its part, Aoun’s Free Patriotic Movement, led by the president’s son-in-law MP Gebran Bassil, issued a statement claiming that the land owner, identified by local officials and residents as George Rashid, “is close to the Future Movement.” Separately, Aoun blamed “extremist groups” for trying to create chaos in the north, without specifying to which groups he was referring.

The landowner’s family, in a statement, claimed to have nothing to do with the tanker, which they said belonged to a “person from Wadi Khaled,” whose name they said they had given to security agencies. They also denied any political affiliation and called for the public “not to politicize the painful incident and to leave the investigations to take their natural course to reveal the circumstances and determine the responsibilities.”

At an emergency meeting of the Higher Defense Council convened Sunday, officials agreed to place security forces in charge of distributing fuel for one month and called on the Health Ministry to work to open another burn unit in Saida, to provide hospitals with the needed fuel and to cover the cost of treatment for the explosion victims.

Meanwhile, the disaster pushed the nation’s health care system closer to the brink of collapse. Family members of some of the injured said they had gone to three or four hospitals before finding one able to admit them.

Pierre Yared, co-director of the Lebanese Hospital Geitawi, told L’Orient Today that the hospital’s burn unit had already been full when the explosion happened and its staff had scrambled to increase the beds available.

“We need a solution for the medications and medical supplies … a solution for everything, because the situation in the hospitals cannot continue like this,” he said. “This explosion is the greatest sign of Lebanon’s need for a healthy hospital sector that can withstand the hits that are coming.”

This article has been updated to include the Lebanese Army’s announcement of the land owner’s arrest.

BEIRUT — Lebanon’s worsening fuel crisis came to a tragic — and perhaps inevitable — climax Sunday, when a tanker holding tens of thousands of liters of illegally stored fuel that had been uncovered in Akkar exploded as desperate residents flocked to fill up their tanks.The explosion in the village of Tleil early Sunday morning killed at least 28 people and injured dozens more, many...