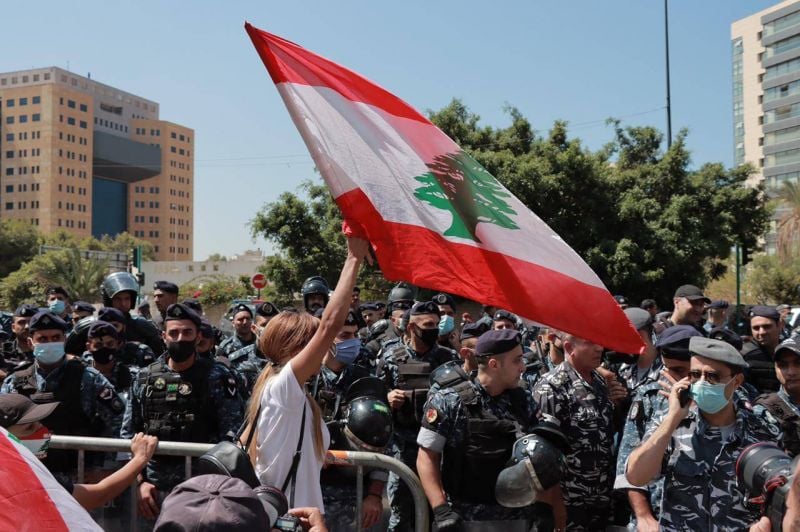 A protester waves a Lebanese flag outside a heavily guarded scheduled session of Parliament at UNESCO Palace in Beirut on Thursday morning. The session did not take place due to a lack of quorum. (Credit: Mohammad Yassine/OLJ)

BEIRUT — Thursday’s session of Parliament was canceled after just 39 MPs showed up, depriving the body of quorum, as protesters outside railed against the controversial meeting.

Some 200 protesters blocked a road between Verdun and UNESCO Palace, the site of the scheduled Parliament session to discuss referring cases against MPs in the Beirut port disaster to a special court, instead of lifting immunity to allow the normal judicial procedure to continue.

“Our MPs feel no shame whatsoever; they are trying to cover up for each other in today’s session and come up with an investigation committee that is made of themselves,” said protester Rita Hitti, the mother of firefighters Najib and Charbel Hitti, who died in the port explosion. “We are fed up with their lies and games of manipulation. They killed our kids, let them go to court.”

At least 218 people were killed in the massive Aug. 4, 2020, explosion at Beirut’s port. Thousands more were injured while entire neighborhoods of the capital were devastated. The investigating judge in the case has requested permission to prosecute three MPs: Ali Hassan Khalil (Amal/Marjayoun-Hasbaya), Ghazi Zeaiter (Amal/Baalbeck-Hermel) and Nohad Machnouk (Ind./West Beirut), apparently for their actions as ministers in previous governments. However, sitting MPs enjoy near-complete constitutional immunity.

On Wednesday, several major parliamentary blocs — including those of the Lebanese Forces, the Progressive Socialist Party and the Free Patriotic Movement — announced they would boycott Thursday’s scheduled session, casting doubt over the proceedings. The bulk of the Future Movement’s bloc, whose MPs gave conflicting signals on Wednesday, did not attend.

“Our priority is to leave the investigation unpoliticized and to actually let [it] take place. Today’s session is attended by the political authorities who want to put up a barrier against the true investigations proceeding, and this is not what we want to push for,” MP Mohammad Hajjar (Future/Chouf) told L’Orient Today.

Protesters reacted with guarded relief to the announcement that the session had been canceled. “This is a first victory and we are happy about it, of course,” said Tony Noun, the father of Joe Noun, another firefighter who was killed in the blast. But, he added, “it is not enough and we will have to fight more.”

Thursday’s cancellation came after a brutal attack the night before on protesters who had gathered near UNESCO Palace, an area bordering Ain al-Tineh, the neighborhood of the official residence of the speaker of Parliament — a position that has been occupied by MP Nabih Berri (Amal/Zahrani) since 1992.

Five protesters, all family members of port victims, were wounded, according to Hanan Hoteit, the wife of Ibrahim Hoteit, whose brother Thawrat died in the blast and who is a spokesperson for the families.

Ibrahim Hoteit was also injured, but released from the hospital along with three others, she said. One protester, however, required surgery.

At least three photographers documenting the scene were also attacked, with one — Annahar photojournalist Houssam Chbaro — requiring hospitalization. He was released after his wounds were treated. The photographers’ cameras were confiscated, according to multiple sources.

The victims’ families blamed Berri for the attack, which was reportedly perpetrated by a group of men in civilian clothing.

“Yesterday, the Parliament speaker sent his thugs to the families of the victims to beat them up,” Ibrahim Hoteit told L’Orient Today.

A spokesperson for Berri denied the accusation, saying, “We have nothing to do with the fights that took place yesterday at night.”

Asked whether security elements controlled by Berri were aware of the attack, and whether they did anything to stop it, the spokesperson referred L’Orient Today to the Parliamentary Guard, saying, “From our end, no one was involved.”

The Parliamentary Guard, a nebulous security entity reportedly comprising members of the Internal Security Forces and the Amal Movement, and which is thought to answer to Berri, did not immediately respond to a request for comment.

Protester Hussein Siblani said the attacks had dampened turnout on Thursday. “People were scared after yesterday’s beatings, and that's why we don’t see a lot of people,” he told L’Orient Today prior to the session’s cancellation. “I also think people lost hope from protesting because they have done it enough but have not succeeded in achieving anything.”

Thursday’s protests remained peaceful, despite warnings from port victims’ families that they would take escalatory measures.

“We are peaceful people,” said protester Elise Mokarzel. “We can’t afford not to be, especially after seeing how the families of the victims got beaten up yesterday — imagine what they would do to us.”

After being released from the hospital, Ibrahim Hoteit warned that the victims’ families would not cease their campaign for justice. “The postponement of the session is a consolation,” he said, but more pressure would be needed since politicians “have made their intentions clear that they will try to avoid justice as much as they can.”

Update: This story has been updated to include information on Wednesday night’s attack, as well as to clarify that the bulk of the Future Movement’s parliamentary bloc boycotted Thursday’s session, not the full bloc.

BEIRUT — Thursday’s session of Parliament was canceled after just 39 MPs showed up, depriving the body of quorum, as protesters outside railed against the controversial meeting.Some 200 protesters blocked a road between Verdun and UNESCO Palace, the site of the scheduled Parliament session to discuss referring cases against MPs in the Beirut port disaster to a special court, instead of...