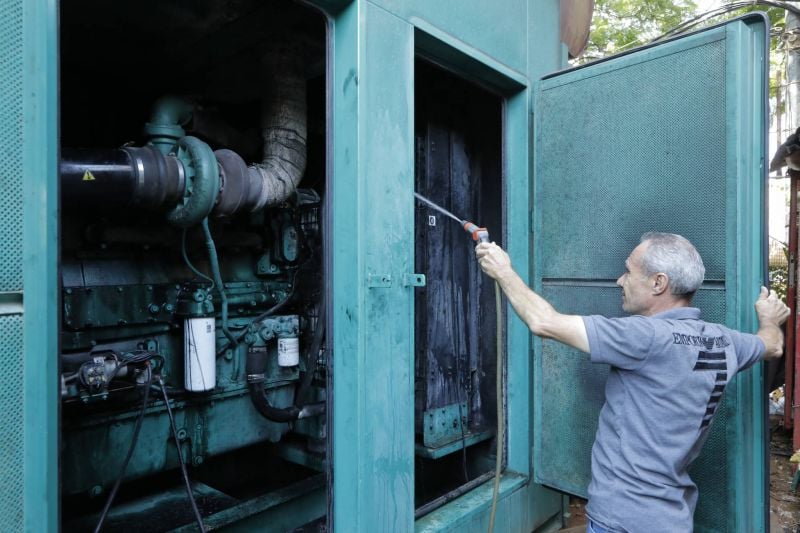 With state power coming as little as a couple of hours per day, demand for generator power — and thus for diesel — has skyrocketed. (Credit: Marc Fayad)

BEIRUT — In late July, Aley’s generator owners sounded a now familiar alarm: they were out of diesel, and if no fuel could be sourced, the lights would be out within 24 hours.

Headlines ensued, as did panic among the area’s residents. With state power outages sometimes extending to 23 hours per day, generators are essential to keep the lights on, the midsummer fans whirring and the food in refrigerators edible.

Aley’s anxiety was quickly assuaged, however. The local political heavyweight, the Progressive Socialist Party, stepped in — a knight atop a diesel truck — saying it would supply fuel the following day.

The party proved as good as its word. The next day, a representative for the generator owners in the Aley area told L’Orient Today that they had indeed received 20,000 liters of diesel and that four more truckloads were on their way to other nearby towns.

“We are in communication with the PSP’s MPs and the head of the party, Walid Joumblatt himself, to try to find a sustainable solution for the diesel shortages in the area in the coming weeks,” the representative said when the crisis erupted.

Fuel of all kinds has been in short supply for months now, causing near daily queues at gas stations; however, most recently diesel shortages have taken center stage.

The spokesperson for gas station owners, George Brax, attributes this to the increased demand for diesel compared to other fuels as a result of prolonged state power cuts.

“Take Beirut as an example,” Brax said. “It used to get 21 hours of state electricity and now only gets three hours” — a complete reversal of hours powered by the state and those powered privately, multiplying generators’ demand for fuel.

Walid Chmiet is a senior PSP member and the person in the party who has been designated to address the fallout of Lebanon’s economic crisis among constituents.

When the diesel shortage looked set to plunge Aley into darkness, Chmiet led his party to take action. He explained that the party sought fuel from distributors, such as Coral and Hypco, and negotiated a selling price so that the PSP could then distribute it to private generator owners. Deliveries have continued since the original crisis in Aley emerged.

Chmiet went on to explain that the party, with the help of the municipalities and the residents of the area, would continue coordinating on how to manage the diesel shortages for the whole Mount Lebanon area.

He was adamant, however, that the PSP’s intervention to ensure diesel supply was not an effort in purchasing patronage. “Our efforts are outside any political interests. Mount Lebanon’s residents are not only affiliated with the PSP and that is why you can’t accuse us of supplying fuel exclusively for our supporters,” he said.

The PSP is not the only political party inserting itself as the middleman in the supply chain between the distributors and purchasers of diesel. The head of the Beirut branch of the Future Movement, Omar al-Koush, told L’Orient Today in July that his party had secured 88,000 liters of diesel to redistribute to residents.

Koush said that at the instruction of party leader Saad Hariri, fellow MPs Rola Tabsh and Nazih Najem, all elected in West Beirut, had negotiated with Hypco, Medco and other distributors to secure this quantity. He added that the party had distributed vouchers in the party’s name to the people of Beirut and the Bshamoun and Aramoun areas, entitling the holder to exchange it for about 500 liters of diesel.

“We are trying with all that we have to secure diesel for the people even if it is not adding up to a big amount because of the big demand,” Koush said. The effort was ongoing, he said, when reached again on Tuesday.

Of media reports that political parties are distributing diesel as a means of securing support as 2022 parliamentary elections approach, Koush commented, “When you work in the public interest, people are going to criticize you no matter what you do, instead of them praising this effort — but nevertheless people’s interests are worth more and we will not stop.”

Speaking to L’Orient Today, the head of the petroleum importers’ association, George Fayad, explained the reason why parties are obtaining more fuel than generator owners:

“I don’t think it is about political favoritism, but because parties are demanding diesel in the name of a number of areas, so the companies would not say no to them.”

“Another reason is because parties often have members who know importing companies’ employees, so they would obtain fuel this way rather than companies giving parties fuel because they are parties,” he added.

Some MPs are openly operating independently to secure diesel amounts for their own areas. MP Hagop Terzian (FPM bloc/East Beirut) tweeted on July 21 about securing 20,000 liters of diesel from the Coral gas station company that he would distribute to the generator owners of his Achrafieh constituency.

Terzian told L’Orient Today that he used his connections with Coral to secure the diesel and that he did it because he was getting calls every day about the horrendous living conditions people were facing without electricity.

“I despise people who use people’s problems for political gain, and I did not do it [source diesel] as an MP but as a citizen who wanted to help the people of his country,” Terzian said. “Besides, I only negotiated the deal and did not get diesel for myself before distributing it,” he added.

Similarly, the Future Movement’s Najem said that in the absence of government policies, using your connections to try to secure diesel is the least an MP can do.

“It is not that we have the Energy Ministry and we are the reason the electricity is not being provided,” he said, taking a jab at the FPM, which has led the ministry either itself or via allies for over a decade. “Since we can’t do anything about it, we can only help in this matter outside standard policymaking.”

Najem’s comments also reveal potential confusion or disagreement within the party about the provision of diesel vouchers. When questioned about how the vouchers were perceived as political bribery by some, Najem said the move had been a one off and that the party realized it was a mistake; however, Koush told L’Orient Today that the distribution of vouchers will continue when the party receives another batch of diesel. Contacted again later, Najem said he was personally opposed to the scheme, and that Beirut MPs and the energy minister will meet Wednesday regarding the situation.

MP Bilal Abdallah (PSP/Chouf), meanwhile, told L’Orient Today that anyone criticizing the efforts of political parties is not being realistic about the situation.

“Anyone framing our efforts as a move to gain votes is being a populist. We are securing a little amount of gas just to ease the situation. Besides, Mount Lebanon is a mixed area in terms of parties so this [clientelism] is a ridiculous accusation,” he said.

The representative of generator owners in Aley said that he is not particularly comfortable with the way the shortages are being dealt with in the mountains, but that the government has left them no other choice.

“We really wished that the government would communicate with us after we announced our demands, unfortunately the government acts like it does not exist,” he said.

BEIRUT — In late July, Aley’s generator owners sounded a now familiar alarm: they were out of diesel, and if no fuel could be sourced, the lights would be out within 24 hours.Headlines ensued, as did panic among the area’s residents. With state power outages sometimes extending to 23 hours per day, generators are essential to keep the lights on, the midsummer fans whirring and the food in...