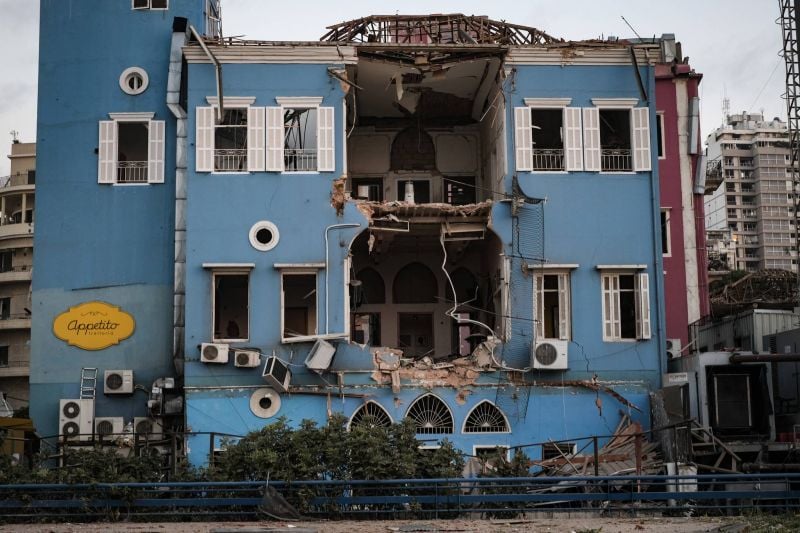 NGOs and civil society groups have had to fill gaps left by the state in post-blast reconstruction efforts. (Credit: João Sousa/L’Orient Today)

BEIRUT — A year after the blast that tore through large parts of the capital, no one knows for sure where the reconstruction process stands.

The state has largely abdicated its responsibility, observers say, leaving NGOs and civil society groups to fill in the gaps. The result has been a lack of coordination and consistent data collection that make it hard to say how the reconstruction is progressing.

“Nobody is able to provide a clear assessment,” said Mona Harb, a professor of urban studies and politics at the American University of Beirut and co-founder of the university’s Beirut Urban Lab.

For the past year the rehabilitation of neighborhoods near the port has largely been delegated to NGOs and ad hoc private initiatives. Immediately after the blast, the Council of Ministers handed responsibility for the government’s participation in reconstruction to the Lebanese Army, bypassing the municipality and various civilian ministries whose portfolios are relevant to reconstruction.

The Lebanese Army distributed aid in the blast-damaged neighborhoods and took on a coordinating role among the dozens of NGOs operating in the area. On Aug. 14, the governor of Beirut, Marwan Abboud, issued a circular instructing all NGOs involved in the humanitarian response to apply to the army for permission to work in the disaster area, allowing the army to monitor relief efforts and avoid duplication, although the municipality later scaled the order back to notifying the army.

Despite these efforts, a November 2020 report from consulting group Siren Analytics found that multiple entities had conducted duplicate needs assessment and damage assessment surveys, leading to confusion among residents regarding who to contact and what processes to follow. It also found “the State was not coordinating the numerous community-based relief efforts and offered very limited communication between public entities and civil society.”

The Lebanese Army’s Forward Emergency Room, the unit established after the blast to coordinate the rebuilding effort and provide transparency, currently lists 8,436 repair projects as “ongoing” and only 59 as “completed.” However, FER relies on self-reporting from the NGOs conducting the work, of which, Harb said, some do report but some don't. And furthermore, they often have different definitions from each other: some NGOs repair only windows and doors, others repair individual apartments but not common spaces like stairways and elevators.

“So, what is really repaired?” she said. “What are we counting, really?” The army did not respond to questions about its data.

A survey of 146 households conducted between 15 May and 15 July by Public Works Studio, a civil society organization that focuses on urban research and design, found that 50 percent of respondents had “finished renovating [their] home or shop since the explosion.”

This is broadly in line with soon to be released findings from the Beirut Urban Observatory at the Beirut Urban Lab. In their recent survey of 797 businesses in Mar Mikhael, Gemmayzeh and Hikmeh, they found 425 businesses were closed compared to 372 that were open, suggesting that less than half of the area’s businesses have returned amid the country’s economic crisis and in the aftermath of the blast.

Beyond these estimates, the status of the multimillion-dollar reconstruction effort is hard to assess and, for some, the uncertainty and lack of transparency is the government’s fault. The prime minister’s office did not respond to questions about its delegation of responsibility to the army.

“For me it’s the crux of the issue,” Harb said. “You have a government that has entrusted the recovery and reconstruction process to an army unit which is not trained to do that job, and it has bypassed the municipality, which is supposed to be the custodian of that operation.”

“The army shouldn’t be the one guiding this whole process,” she said. “It’s fine that the army played a coordination role in the beginning, in terms of the efforts done by the private sector, … but what we need is a public framework and an essential part of this is concerned public institutions as well as social factions and the victims and residents themselves.”

As evidence of the government’s underwhelming response she pointed to one of the only laws created by Parliament to address the situation created by the blast: law 194 of 2020, which, among other things, places a number of restrictions on the sale of land in the area near the port for two years in the name of social protection. Ironically, the law exempts real estate companies, including the massively powerful Solidere, from the restrictions.

Saksouk argued that a range of institutions, from the municipality of Beirut to the Higher Council for Urban Planning, the Order of Engineers, the Directorate General of Antiquities, and the Public Corporation for Housing need to be delegated their respective responsibilities in order to achieve a just and accountable reconstruction that allows for the participation of the neighborhood’s residents.

“Without this framework that we are pushing for, we will not achieve the spatial justice we want for these neighborhoods,” she said.

BEIRUT — A year after the blast that tore through large parts of the capital, no one knows for sure where the reconstruction process stands.The state has largely abdicated its responsibility, observers say, leaving NGOs and civil society groups to fill in the gaps. The result has been a lack of coordination and consistent data collection that make it hard to say how the reconstruction is...