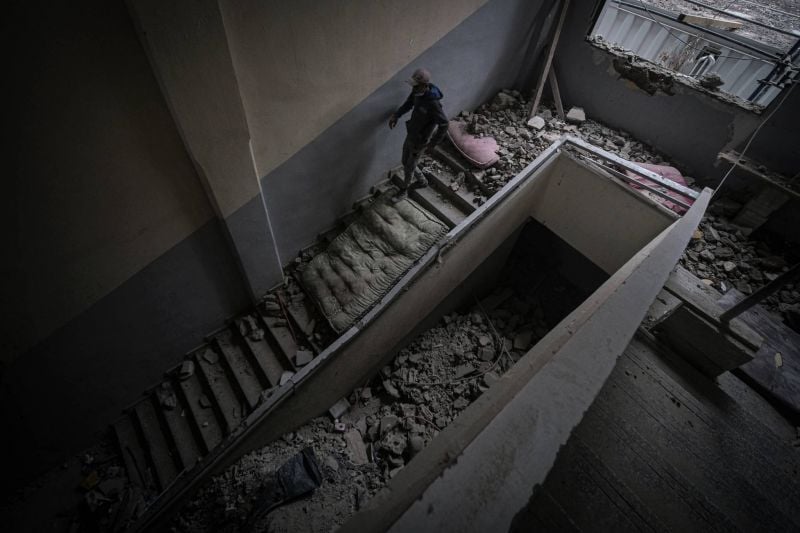 A man walks through a building in Karantina still full of rubble nearly one year after the Beirut port explosion. (Credit: João Sousa/L’Orient Today)

BEIRUT — A year after the Beirut port explosion reduced large swathes of the surrounding neighborhoods to rubble, hundreds of thousands of tons of waste created by the blast — some of it hazardous — has not yet been cleaned up.

The Aug, 4 port blast left up to 800,000 tons of rubble and debris strewn throughout the city. Of this amount, only about 40% has been disposed of to date, Bassam Sabbagh, head of Urban Environment Service at the Ministry of Environment told L’Orient Today.

Sabbagh also acknowledged that the remaining debris contains hazardous material, such as asbestos, but said there is no money to clean it up.

Jihan Seoud, energy and environment program manager at the United Nations Development Program’s Lebanon office, who has been monitoring the post-blast cleanup, said that Beirut’s waste management systems are now at breaking point.

“A sorting and composting facility for municipal waste located in Karantina has been severely damaged by the blast, and it is one of the two plants serving the city,” she said. “In the meantime, more trash is going to landfill sites, one of which is nearly full.”

In the aftermath of the blast, Seoud said, cleanup teams including UN agencies, civil society groups, and Ministry of Environment staff got to work clearing debris and waste outside and inside the port.

Most of the disaster waste is currently being transferred to a site  in Karantina assigned by the Beirut governor for temporary storage, while smaller temporary storage sites have been identified at other sites around Beirut.

“The rubble was tested and assessed, and a roadmap of treatment approaches designed as well as technical guidelines on how to protect workers dealing with the rubble and how to transport and dispose of it,” Seoud said. The latter part was key, she said, “especially because [the debris] was found to contain asbestos, a compound that is cancerous if inhaled in high doses.

Apart from that, she said, “The destruction contained hazardous chemicals, given the types of material known to be normally stored there [at the port], including pesticides, pharmaceutical products, industrial chemicals, lead from vehicles, and various types of heavy metals.”

However, now the work has stalled. The total cost of the cleanup, estimated to be around $100 million, is one reason. Another is the ongoing government formation standoff.

On Aug. 10, 2020, then-Prime Minister Hassan Diab resigned amid the public outrage over the Beirut port explosion. The government, now in caretaker status, did not sign off any of the plans submitted by the UNDP for cleaning up and disposing of the waste, Sabbagh said, and thus has not started implementing any of the systematic waste management plans submitted by UNDP and other UN agencies.

To date, Seoud said, there is no official plan to deal with the disposal of the waste that remains, “The roadmap [provided by the UN] is a framework plan but the government has not taken any decisions on what to adopt and whatnot, and no disposal site has been allocated yet.”

Sabbagh, meanwhile, attributed the lack of action on cleaning up the remaining waste to lack of funding.

“Although UN agencies have provided us with a waste management plan, however, we were not able to adopt these plans yet because we would be in need of funding to be able to get the right materials,” Sabbagh told L’Orient Today.

Should hazardous waste remain on the ground once the winter rains begin, contamination is more likely to seep into the soil and water system, he said.

However, in a Catch-22, Sabbagh said the fact that the remaining debris contains hazardous material has prevented a speedy cleanup, as the ministry lacks the needed protective gear for workers.

“We should be very careful when we are removing these materials because the workers might breathe in those toxic particles, which might be cancerous, and in order to maintain workers’ safety we are in need of certain materials and gears,” he said.

In the meantime, chemicals contained in the waste may pose a threat to public health through direct exposure or through soil and water contamination.

Air pollution from the blast is considered to be limited and has already been contained. Soon after the explosion, The Aerosol Research Lab at the American University of Beirut reported that air quality indicators had returned to pre-event levels after an increase was observed between 6 and 7 p.m. on Aug. 4, after the explosion.

But environmental experts told L’Orient Today that the chemical contamination of particles scattered by the explosion may become airborne again, while soil and water contamination remains a concern.

“The worries are not about air pollution now, in my opinion — it is about the rubble and uncertainties around it …. Did they do a field survey to assess the type of waste?” Greenpeace's Middle East and North Africa program manager in Beirut, Julien Jreissati told L’Orient Today. “Did they segregate the waste accordingly, especially removing hazardous waste? Did they treat it and dispose of it properly?”

Sabbagh said that there had not been any survey to assess the type of waste, much of which has now been distributed across Lebanon and different landfills.

He said the ministry is scrambling to get the funds needed to continue the cleanup before the winter rains:

“We don’t want things to get worse.”

BEIRUT — A year after the Beirut port explosion reduced large swathes of the surrounding neighborhoods to rubble, hundreds of thousands of tons of waste created by the blast — some of it hazardous — has not yet been cleaned up.The Aug, 4 port blast left up to 800,000 tons of rubble and debris strewn throughout the city. Of this amount, only about 40% has been disposed of to date, Bassam...