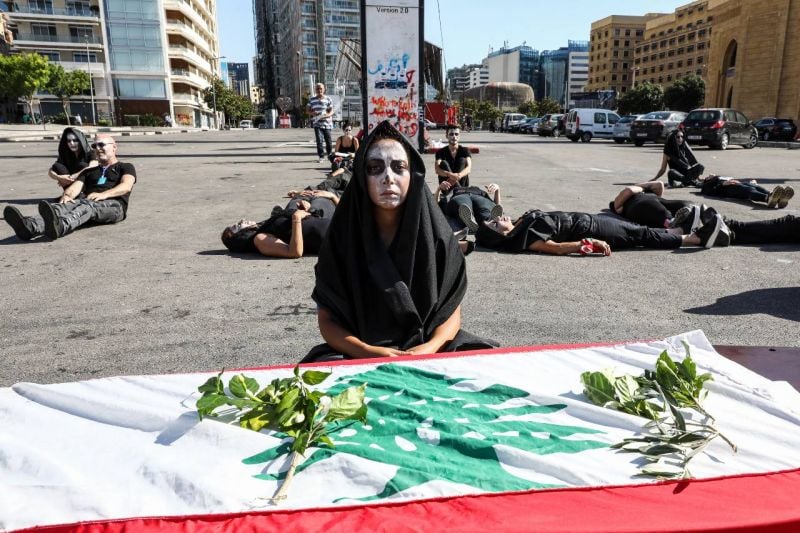 Demonstrators in Beirut organize the country’s mock funeral to protest the economic crisis and the government on June 13, 2020. (Credit: AFP)

It is undeniable that over the last month things in Lebanon have become significantly worse. The country has toppled off “the brink” upon which, according to some journalists, it has been teetering for so long, and plunged headlong into darkness, both literal and figurative. Nothing is not difficult. I find it hard to explain to friends abroad, those who don’t have family or deep connections here, just how difficult things are, or how that difficulty maintains a suffocating grip on every aspect of your day from the minute you wake up. The air itself has become unbreathable, thick with generator soot that streaks everything black — from furniture to clean laundry to sky — as though the sense of misery that hangs over everything has taken on physical form, now leaves physical traces.

And yet despite (or maybe in reaction to) all this I have noticed a definite increase in those who bitterly blame “the people” for the continuation of this mess we’re in. “Why don’t ‘the people’ rise up?” they ask. “What will it take?” Their consensus, both implicit and explicit, is that “the people” don’t care about themselves. “The people” are apathetic. There can be no other explanation.

These blame-slingers seem to be foreign to the situation, even if they are from here, or would like to maintain a sense of foreignness to the situation, even if they are living here. Otherwise how to explain their self-conception, the way they speak as though they were individual exceptions to, at a superior remove from, this great horde of miserable people, “the Lebanese,” whose reaction to an unbearable situation is not to nobly rise up in revolution, as our speakers seem to imply they’d be willing to do, but to plod dumbly along, accepting every humiliation like the sheep/dogs/donkeys they are?

It’s not the lack of empathy in this perspective that bothers me, it’s rather the lack of memory, the lack of insight, the lack of even a modicum of analytical sense. First, to ask why people don’t rise up is to deliberately forget that they did in fact rise up, many at great personal cost. While the celebrations and parties in the squares of Beirut and Tripoli remain the most ubiquitous images of the uprising (celebrations that were rightfully deserved), they seem to also obscure the memory that there were strikes, protests and road closures for months across the length and breadth of the country, including in areas very singular in their party loyalties and where people paid with their lives and livelihoods for daring to rebel. Twice, people poured in from towns and villages near and far to Beirut, to stand guard at the entrances to Parliament, trying to block, with nothing but their soft and vulnerable bodies, the MPs — each arriving with their convoys of armed bodyguards — from forming quorum to vote in the current sham of a government. Once, they succeeded.

The uprising as a whole sputtered out due to numerous factors, beginning first with a global pandemic. But there was also the significant fact that the state’s deliberate project since the end of the war has been to smash up all the country’s remaining civic networks and structures in order to negate the possibility of building any political alternatives. Almost every major institution, governmental or otherwise, every service, every union, every major economic sector is beholden to the sectarian parties or outright owned by the oligarchy’s cartels. This is not to mention the state within a state that operates nearly independently in certain areas, offering basic services and infrastructure that the state cannot — or will not — provide, in return for, if not true loyalty, then the appearance of it. Dissent is silenced in ways both covert and openly violent.

Those first weeks of the uprising were electrifying not just because people managed, despite all this, to come together in a fierce explosion of will. But because immediately, people began trying to collectively imagine a different kind of country, one where we could rebuild the connections, the unions, the civil society — again, all deliberately sabotaged — that might make us into true citizens, into people who felt a sense of civic responsibility toward one another not mediated by sect or established party or class. I had no idea how this system in which we live had worked so hard, in every way, to actively stifle our collective imagination until that imagination was suddenly reanimated by the energy of the uprising. It was like someone who had no clue they couldn’t see color until suddenly they did. But the work of rebuilding is hard, and long, and consists of unglamorous but exciting victories such as the one represented by the recent union elections at the Order of Engineers and Architects, where a coalition of independent candidates won by a landslide victory.

These people who consider themselves separate from the “apathetic” Lebanese, as the wise truth-tellers able to see things as they are, are not in fact exceptions to the Lebanese system but the most exemplary products of it. A system that not only apportions individual blame for active systemic sabotage, but that encourages the idea that there is something fundamental in our national character that makes us susceptible to — and therefore deserving of — abuse. It is absolutely and only in the sectarian system’s best interest that we believe in and repeat these simplistic, overarching narratives.

Because to believe that we are inherently sectarian is to excuse the sectarian state for its deliberate incitement of divisions in ways both immediately obvious (discourse, quotas, clientelism, violence) and otherwise (maintaining, by law, electoral districts that practically ensure one-color voting).

To believe we are resilient is to take on the burden of finding our own solutions to the basic services the state denies us, as well as the burden of accepting that this is in fact our responsibility.

To believe we are apathetic is to accept that we are deserving of all this — these fuel lines, these bread lines, these empty pharmacies and stolen bank deposits, this exploded port, and above all these vile and ruthless warlords — as punishment for that apathy. To believe we are apathetic is also to succumb complacently to the failure of the imagination dictated by this system. It’s a failure to see how many people are fighting, and how, and the networks of love and solidarity and spontaneously organized mutual aid that are keeping people afloat.

It is imperative that we learn how to tell new stories about ourselves, ones not dictated by this system. It is the first step on the long road of becoming a different people.

If I were to resort to the tired trope of comparing us to animals, then the vast majority of us are not sheep obediently following their leaders, or dogs whose loyalty can be ensured with scraps. Rather we are like rats in a maze, searching desperately, tirelessly for a way out. This maze is rigged lethally against us at every turn, and we must use all our energy and care and vast intelligence to navigate it and protect those whom we love inside it without it killing us first. Call that what you like, but it is certainly not apathy.

It is undeniable that over the last month things in Lebanon have become significantly worse. The country has toppled off “the brink” upon which, according to some journalists, it has been teetering for so long, and plunged headlong into darkness, both literal and figurative. Nothing is not difficult. I find it hard to explain to friends abroad, those who don’t have family or deep...