One man’s crisis is another man’s livelihood: A parallel market initiative nourished by the fuel shortage

Clandestine gasoline sales, home delivery for fuel, bribes at the pumps — some find an unexpected livelihood amid the daily hell motorists face. 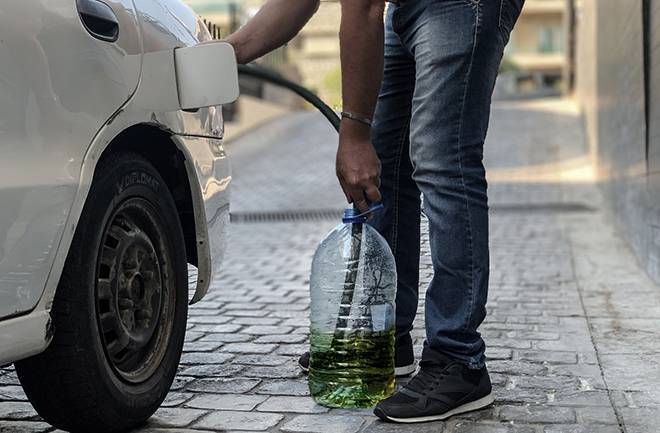 Ali’s enterprise initially involved repeatedly filling his own car’s tank and then decanting the gas from it into plastic vessels for resale. (Credit: Mohammad Yassine)

Ali, 40, has a family to provide for but no job. For him, the countrywide fuel crisis is an unlikely gift. In the everyday challenge that drivers face to find gasoline, he has found an unexpected livelihood — selling gallons of gasoline on the black market.

“Those who do not want to wait in the long queues under the hot sun call me, and I deliver gasoline to their homes,” he told L’Orient-Le Jour.

Clandestine gasoline providers like Ali can be found all over Lebanon at present. Their rise is the result of the country’s acute fuel supply crisis, which in turn is due to a dysfunctional subsidy mechanism under which Banque du Liban is supposed to release dollars to pay for imports.

However, for weeks now importers have accused BDL of delaying opening lines of credit to pay suppliers, causing fuel tankers anchored off the coast to refuse to unload their cargo. The subsequent fuel shortages have been exacerbated by large-scale smuggling to Syria, where gasoline is sold at much higher prices.

The latest fuel subsidy mechanism, which provides dollars at an exchange rate of LL3,900 for 100 percent of imports — as opposed to the previous one under which BDL subsidized 90 percent of fuel imports at the official rate of LL1,507.5 to the dollar — has significantly increased prices at the gas pumps. This week, 20 liters of 95-octane gasoline is selling at LL71,900 at gas stations.

Although gasoline prices have jumped, some motorists do not mind paying even more just to save themselves from the hourslong queues at stations. For Ali, it all started at the onset of the crisis a few weeks ago.

“I began filling up the tank of my own car multiple times per day, then unloading the gasoline into cans in order to sell it on,” he said

This time-consuming method, which involved waiting in the queues several times per day, allowed him to make a profit of around LL25,000 per gallon [when gasoline was still priced at LL28,000 per gallon]. He charged a little more for his services when he had to deliver gasoline to his customers.

Little by little, Ali expanded his side business in the Greater Beirut area, partnering with some gas station attendants who were seeking to earn additional money without being involved in the lucrative, but risky, business of smuggling gas to Syria.

Today, these gas station attendants call him in the middle of the night to provide him with multiple 20-liter cans of fuel for which he pays more than the market price but sells on for an even higher rate the next day.

“In the morning, I sell these cans to some motorists who have run out of gasoline or to those who don’t have the time to wait in the queues,” he said. “Gradually, I built up a reputation, and people now call me for help.”

Today’s crisis has grown to the point that Ali is assisted by some young people who suggest to customers that they can wait in the line on their behalf to fill up their cars with gasoline.

It is indeed a profitable business: Ali sells 10 liters of gasoline at no less than LL100,000.

“Am I the one responsible for the crisis?”

While Ali has found a way to provide for his family during this chaotic situation, he is scared of getting into trouble with authorities that have banned the filling of gallons at the stations.

“But why would they arrest me?” he said. “What is wrong with making life easier for the Lebanese people who are overwhelmed by the crisis and who, in return, pay me a well-deserved fee? Am I the reason behind the crisis, or is it the mafia smuggling to Syria? Am I responsible for this chaos, or are the incompetent authorities? If they want to criminalize the trade of gallons on the parallel market, why do they not go to Tripoli or Akkar, where cans are on display by the side of the roads!”

Ali is far from being a unique case. This parallel business is spreading across the country, showing once again that ingenuity in circumventing crises prevails over the search for adequate and lasting solutions to problems, which hides the need for the Lebanese people to contest the absurd state of affairs.

Hence, gas stations have turned into a Wild West where bribes paid to filling station attendants to fill up the gas tank and fights for the right of way or for “privileges” given to some lucky people become increasingly common. This is added to various subterfuges designed to discreetly fill cans while pretending to pump gasoline into a car.

It is a total mess where the law of the strongest, the most connected and loudest is what prevails.

Moreover, as the crisis evolves, and disputes — and sometimes armed conflicts — break out at stations, security agencies are deployed to protect the stations rather than to ensure that their owners are opening for business and fairly selling what fuel stock they have.

This prolonged gasoline crisis — which overlaps with an array of other shortages (bread, medicines, electricity) presently punctuating the lives of the Lebanese — allows Ali to find a livelihood, however precarious.

But do unemployed people, like Ali, realize that this system, which traps the Lebanese in never-ending queues, is the very one responsible for their inability to find a decent job and lead a life of dignity?

Ali, 40, has a family to provide for but no job. For him, the countrywide fuel crisis is an unlikely gift. In the everyday challenge that drivers face to find gasoline, he has found an unexpected livelihood — selling gallons of gasoline on the black market.“Those who do not want to wait in the long queues under the hot sun call me, and I deliver gasoline to their homes,” he told...