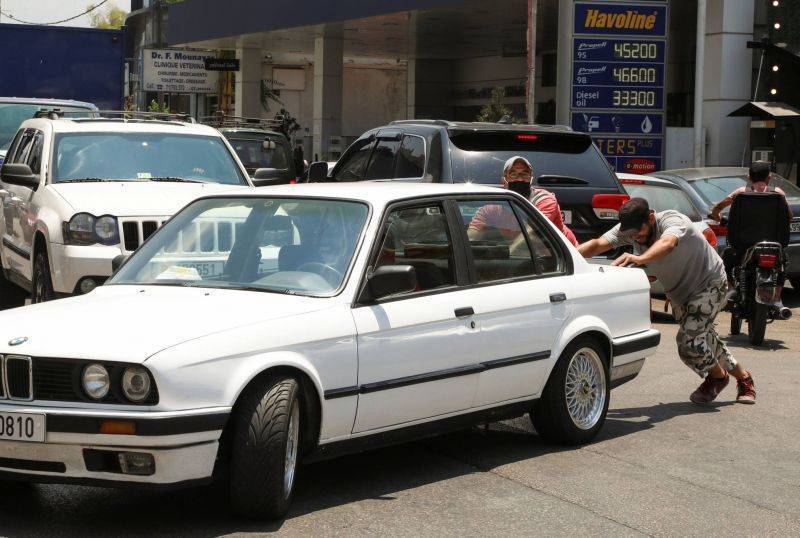 Two men push a car that has run out of gas in front of a Beirut gas station on June 24, 2021. (Credit: Mohammad Azakir/Reuters)

The same goes for prolonged state power cuts, which neighborhood and building generators can no longer bridge due to diesel shortages.

This bleak picture is just an illustration of the economic and social collapse that has engulfed the country and affected all vital economic sectors, against a backdrop of the partial lifting of fuel subsidies.

The ruling political class’ inaction in the face of such a catastrophe — one for which it is responsible — has been described as criminal. Yet inaction still prevails.

No exceptional measures, be they partial or temporary, have been taken, which means that no light can be seen at the end of the tunnel.

The most recent initiative is the decision to partially end fuel subsidies. Importers will now pay for fuel imports at an exchange rate of LL3,900 to the US dollar, instead of paying most of their bills at the official peg of about LL1,500. Meanwhile, the parallel market exchange rate has crossed the LL17,000 threshold.

The decision is officially designed to ease some of the pressure heaped on a people at the breaking point — most of whom have thus far endured the situation with remarkable civility.

Yet, the necessity of preserving Banque du Liban’s remaining reserves — the sole means by which Lebanon can continue financing imports of basic necessities, including petroleum products — largely prevails in official discourse. The ultimate goal is to end overly costly subsidies.

This aim has been center stage since BDL Gov. Riad Salameh warned that he would not be able to support the cost of subsidies for much longer. This approach is as simplistic as it is misleading.

Although the precise amount of BDL’s remaining foreign currency holdings remains unknown, it is obvious that the current policy is unsustainable. Moreover, strictly speaking, Lebanon does not have a subsidy policy per se, as subsidies are typically decided as part of a national budget voted on by Parliament. Nothing of the sort occurred here.

For nearly 30 years, this parity has de facto subsidized the consumption of the Lebanese. This policy is now limited to a few import lines, but the logic remains the same. The only difference is that its cost is now visible and scrutinized by all: BDL’s dwindling foreign currency reserves are now estimated to total just less than $14 billion at most, compared with $32 billion at the outset of 2019.

While the cost of this policy was thoroughly concealed in BDL’s balance sheet, it became clear after the crisis erupted. According to estimates made as part of the Lazard plan in April 2020, BDL’s losses amounted to more than $60 billion, before the crisis. Such losses, exceeding the precrisis size of the Lebanese economy, are unprecedented for any central bank in the world.

Focusing the public debate — if this term still has meaning in a media landscape clogged with propaganda — on the cost of subsidies is either due to blindness or designed to mislead. It is crystal clear that the current system is unsustainable. Yet limiting the blame for the depleted reserves to the subsidies conveniently hides a totally different reality.

From October 2019 to October 2020, BDL’s foreign currency holdings dropped by $13 billion, while the cost of the subsidies did not exceed $5 billion. Discretionary transfers of funds that were authorized in the absence of a capital control law explain the difference. Consequently, according to a pure logic of managing scarcity, some large account holders are now openly favored over average Lebanese, who are forced to endure shortages.

Having said this, the current subsidy policy requires urgent review. Apart from the fact that it is not implemented as part of a budget, it is as ineffective as it is inequitable.

Much has already been said on the subject. As long as a price difference for gas persists, smuggling will go on and will not be halted no matter the armed force seeking to curtail it.

Smuggling on a large scale exacerbates social tensions, which are at risk of exploding at any moment. The broad-spectrum subsidies do not differentiate between the owner of a large SUV or sedan who can afford to have his own driver and pay for fuel, and an ordinary soldier with barely enough money to fill up his car’s fuel tank so as to drive to his duty station across the country.

The United Nations Development Program has indicated that only 6 percent of transportation subsidies in Lebanon end up in the pockets of the poorest 25 percent of the population, while the wealthiest quartile benefit from 55 percent.

Subsidies sustain the cartels that monopolize fuel distribution in Lebanon, and whose connivance with those in power has been amply demonstrated. In addition, they reinforce the multiple exchange rates, which makes projecting rates impossible when signing contracts — a key impediment to the economy.

Lastly, they hamper the quantitative adjustment mechanisms of consumption — although for some goods, such as gasoline, it is difficult to calculate the price elasticity of consumption in the absence of alternatives to private vehicles, such as public transportation options.

Hence, lifting gasoline subsidies should be coupled with a simultaneous initiation of a public transport network.

In light of the present political landscape in Lebanon, which is dominated by sectarian, business and militia interests, there is no point in debating public policy options, considering that the ruling oligarchy adopts very short-term approaches to issues, without any consideration whatsoever for their economic and social impact.

This being said, the only thing that can be done is to identify the guiding principles of the alternative approach in anticipation of the day when a truly independent government is empowered to carry it out.

It is all about putting forward an alternative approach, not about letting oneself be carried away by the spurious debate on whether subsidies need to be lifted, when they are only a symptom of the crisis.

This approach requires first of all an exhaustive inventory of the assets that Lebanon still has, which implies declaring the foreign currency assets and the gold that BDL has as “national strategic reserves.” The preservation and potential allocation of such assets need to be part of a multiyear plan to drive growth and settle the financial system’s losses to allow for the provision of new credit lines as part of an International Monetary Fund program.

This comprehensive plan would include a policy to provide immediate assistance to society’s most vulnerable segments in order to compensate for the impact of inflation and the exchange rate fluctuation, a targeted subsidy program and direct cash assistance to needy residents.

Subsidy laws would give priority to imports such as wheat and the fuel used in industrial, agricultural, craft and other facilities — which implies adopting tendering procedures that would ensure economies of scale and limit intermediaries.

They would also need to cover chronic disease medications and other medicines and medical equipment that would be determined later — which implies setting up a transparent needs assessment involving public authorities, health professionals, the private sector and unbiased third-party monitors.

Direct cash assistance should be allocated to support the less fortunate. These allocations should not be used to reinforce clientelism, but should be distributed based on a national database established through category targeting methods and the use of digital technologies, similar to the COVID-19 Impact module. Its establishment should also encompass institutional and administrative oversight that ensures transparency.

However, an assistance-based approach can be only temporary, while a long-term approach should be based on social rights guaranteed by the state.

In this sense, universal health coverage that meets the basic health care needs of the population must be made a priority, and will serve as a foundation for reforming the social protection system, where chaos has only facilitated the appropriation of public resources according to a logic of clientelism.

A debate on gasoline, fuel oil and other essential product subsidies must necessarily take place as part of a global approach that aims to safeguard Lebanese society rather than allow it to continue its slide into disintegration.

Sibylle Rizk is a member of the executive board of LOGI, the Lebanese Oil and Gas Initiative, and the director of public policy at Kulluna Irada. Translation by Joelle El Khoury.

Long queues at gas stations in the sweltering summer heat and vehicular traffic clogging the roads have become familiar elements of Lebanon’s urban landscape.The same goes for prolonged state power cuts, which neighborhood and building generators can no longer bridge due to diesel shortages. This bleak picture is just an illustration of the economic and social collapse that has engulfed the...