Abdallah Salam and Marie-Joe Abi-Nassif, who got married in Lebanon in 2019, are determined to continue fighting until their civil union is fully registered, armed with letters of support from the Justice Ministry 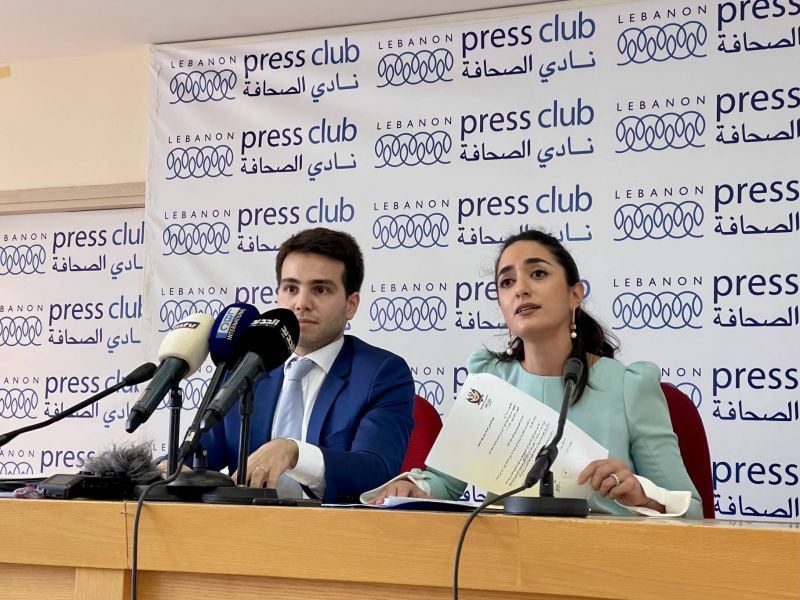 Abdallah Salam and Marie-Joe Abi-Nassif during a press conference at the Press Club in Furn al-Shubbak on June 24, 2021. (Credit: Nour Braidy/L'Orient-Le Jour)

A notary officiated the civil marriage of Abdallah Salam and Marie-Joe Abi-Nassif on June 15, 2019, in Beirut. A glimmer of hope filled their eyes when they said, “I do.” Eager, in their words, to contribute to building a state of Lebanon where the rule of law prevails, they hoped to see their marriage recorded soon after in the civil status registry.

But two years later, their union’s registration still has not been finalized, and they have not been issued their family ID card. They are determined to see the registration of their marriage finalized, reinforced by letters from the Justice Ministry that back up their case.

On a recent visit to Lebanon from the United States, where they live, the couple held their first press conference since the wedding in Beirut to speak on the subject. It was an opportunity for the two Lebanese to denounce in particular “the administrative harassment of the Interior Ministry.”

“We are two Lebanese persons who met at law school [in the US] and who decided to be married in a civil ceremony on Lebanese territory,” Abdallah said at the conference, which was held at the Press Club in Furn al-Shubbak.

“Today we demand the finalization of our civil marriage registration, and to be issued our family ID card,” Marie-Joe said.

During the press conference, Marie-Joe explained that she and her husband had chosen to remove the references to their religious sects from their civil status registers — a procedure permitted by a 2009 memorandum issued by Ziyad Baroud, the interior minister at the time. Baroud was present at the press conference to support them.

By choosing to remove their sectarian affiliation, Abdallah and Marie-Joe joined those “who do not belong to any religious community.” Their marriage is therefore governed by civil law, in accordance with Article 10 of Decree 60, issued on March 13, 1936.

In April 2013, the first civil marriage ever carried out on Lebanese soil took place between Khouloud Succariye and Nidal Darwiche. The marriage was officially registered following two favorable decisions from the Justice Ministry’s legislation and consultations department.

In the two years that followed, 13 civil marriages in Lebanon were registered, before then–Interior Minister Nohad Machnouk stopped allowing the process in 2015. He justified his decision by saying that it is impossible to register civil marriages carried out in Lebanon, because no legislative framework exists to regulate them.

Despite the legal precedents and the legislation and consultations department’s decisions, the Interior Ministry has refrained from finalizing the registration of Abdallah and Marie-Joe’s union.

According to Decree 60, the Interior Ministry must transfer the marriage certificate registered in the sejel al-wared (“reception register”) to the sejel al-tanfiz (“execution register”) within 24 hours. This has yet to take place even though more than two years have passed.

“Through this illegal obstruction, the Interior Ministry appears intent on inflicting material and moral harm on our persons, despite the legal validity of our marriage,” the married couple wrote in a statement distributed at the end of the press conference.

“Our battle with the Interior Ministry began two years ago, and it will be long,” Marie-Joe said. “We knew that this battle was not going to be easy,” she added.

During the press conference, Abdallah held in his hand a letter addressed to their attorney, Hassan Rifaat, on Oct. 10, 2019, from Gen. Elias Khoury, the director-general of personal status. The letter, which Abdallah described as “terrible,” included Khoury’s reply to repeated inquiries from the couple about the case.

In the missive, which L’Orient-Le Jour reviewed, Khoury said he had to “await responses from the Ministry of Justice [to questions] on this matter.” Khoury indicated that he was awaiting responses from the ministry to a document sent on March 2, 2015, that included questions for the Justice Ministry about civil marriage.

Abdallah and Marie-Joe said, “It is clear that the Interior Ministry’s [claim] is a mere pretext to evade its responsibilities.”

They also denounced the fact that the Interior Ministry would not let them review the document sent to the Justice Ministry. “A mere letter does not have the legal effect of absolving its author of any obligation or of suspending citizens’ rights — and certainly not for a period exceeding five years,” they said.

After having received Khoury’s reply, Abdallah and Marie-Joe wrote to the Justice Ministry on July 13, 2020. Caretaker Justice Minister Marie-Claude Najm replied in a letter two weeks later, recalling the two decisions by the legislation and consultations department from Feb. 12 and April 4, 2012.

She stressed that these decisions affirm that “it is possible to conclude civil marriages in Lebanon and to duly register them in the civil status registries.” Najm added that these decisions “contain all the answers to the questions on this matter,” and that “they were rendered in a clear manner that is not open to any ambiguity or interpretation.”

The minister also noted that based on these decisions, the Interior Ministry registered “a number of civil marriages in the civil status registries.”

“Given the clear response of the Ministry of Justice, the illegal obstruction by the General Directorate of Personal Status has become all the more flagrant,” the couple said. They noted that over the course of “eight years, the Ministry of Justice has confirmed no less than four times the legality of civil marriages concluded in Lebanon.”

A case to follow up on before the courts?

Najm told L’Orient-Le Jour that she was “very clear” in the letter recalling the consultative opinions. “There is no ambiguity,” she said. However, she underscored that if the situation remains unchanged, a binding court ruling could be issued at the request of the parties.

The couple told L’Orient-Le Jour that they feel “victorious.” “With the Justice Ministry’s document in hand, the Interior Ministry no longer has a valid reason for not finalizing our union’s registration,” Abdallah said.

He and his wife said they believe that “the General Directorate of Personal Status causes serious harm to their fundamental rights — namely, the right to marry and freedom of conscience.”

If the Interior Ministry “does not cease this illegal obstruction,” they said, they reserve the right to take legal action in Lebanese courts as well as through international bodies.

“No one is above the law,” Abdallah insists.

L’Orient–Le Jour was unable to reach Khoury for comment.

Abdallah and Marie-Joe said they are determined to see the issue through in Lebanon. “They think that we will get tired of it and stop coming to Lebanon to claim our rights. But we will continue to do so,” Marie-Joe said.

“There are no shortcuts in the process to rebuild a country,” she said. They believe it is their duty not to give up the case, and that is why they have not obtained another civil marriage abroad.

“I have an obligation to continue the battle,” Abdallah said. “This is a way of translating the ideals of the October 2019 revolution.”

A notary officiated the civil marriage of Abdallah Salam and Marie-Joe Abi-Nassif on June 15, 2019, in Beirut. A glimmer of hope filled their eyes when they said, “I do.” Eager, in their words, to contribute to building a state of Lebanon where the rule of law prevails, they hoped to see their marriage recorded soon after in the civil status registry.But two years later, their union’s...