Life in line: Lebanon adjusts to queuing for gas at the country’s pumps 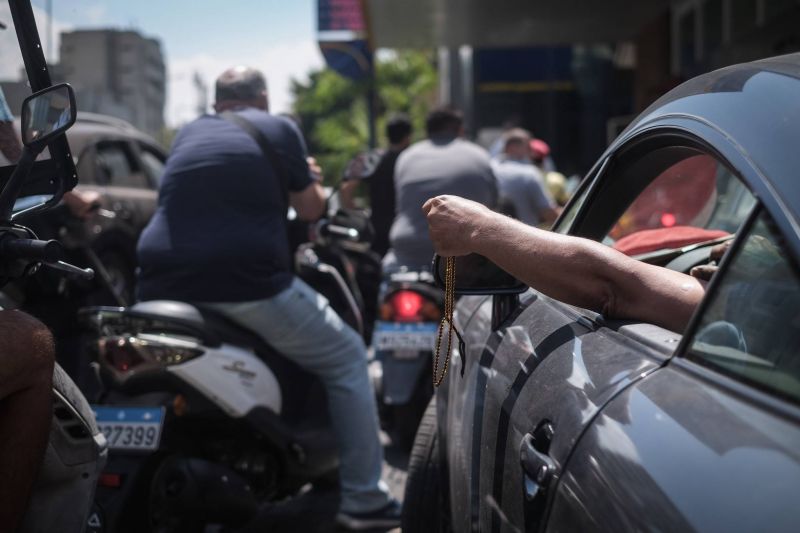 Over recent weeks, Lebanon's residents have grown accustomed to spending a significant portion of their day lining up for gas.(Credit: João Sousa/L’Orient Today)

BEIRUT — At the Medco gas station in Beirut’s Tariq al-Jadideh neighborhood, the scene was typical of a fuel line in Lebanon: chaos, barely controlled.

Drivers formed long queues that blocked most of the main road, trying to overtake one another as station employees begged them to be patient. A 60-year-old woman observing the rush shouted, “You all deserve this after electing such politicians.”

A driver who had completely run out of gas was pushing his car in the line. “I refused to fill my car [because of] these humiliating lines, and I barely drove it in the past few weeks so that I don’t have to,” the driver told L’Orient Today.

“Unfortunately I am now pushed toward humiliation just like everyone else.” 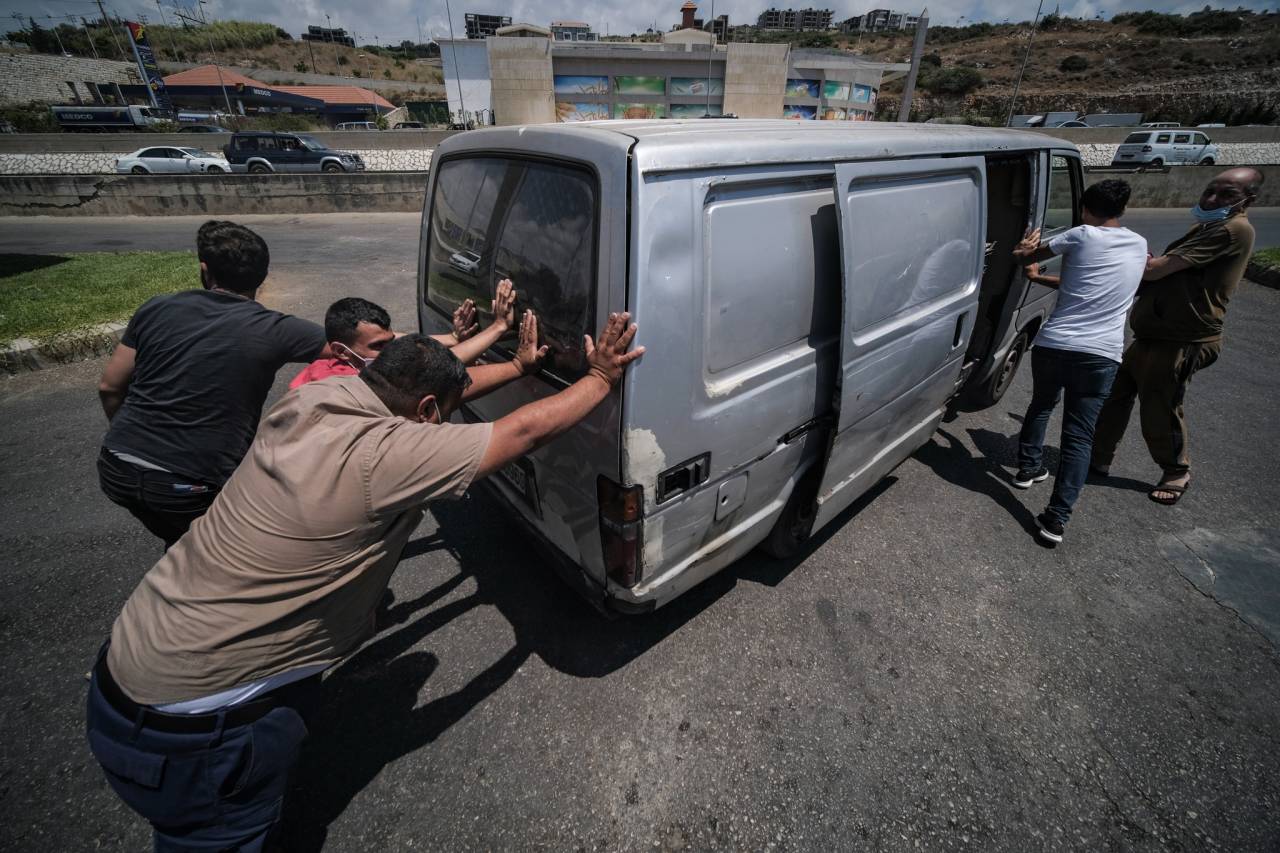 Not everyone makes it to the gas pump before running out of fuel. (Credit: João Sousa/L’Orient Today)

As disordered as the scene appeared, it also gave a glimpse of the ways Lebanese have begun to adapt to the new reality at gas pumps, since the fuel shortages experienced in recent months began to hit.

With lines for gas becoming the norm, volunteers have started showing up to direct traffic and ease traffic clogging roads.

“I love the residents of the area, and since I am unemployed, the least I can do is try to help them with their struggle as they try to fill their cars with fuel,” Abo Abed Itani, 60, told L’Orient Today as he shepherded backed-up vehicles through the line.

Stations have also become better organized, separating motorcycles from cars. Vehicle drivers who for months have been queueing whenever they need gas now trade jokes as they wait in the sun.

Workers have become used to the gas shortages and no longer worry about informing customers of sales limits. By now, many drivers have befriended station workers who sometimes help them jump the line or share some tricks to skip ahead a few cars, like paying to go through the car wash.

Others are sending people to fill up their tanks on their behalf. Hasan Dayekh, 14, was driving his brother’s motorcycle through a line at Hypco gas station in Corniche al-Mazraa with his friend behind him. Dayekh told L’Orient Today that his brother works every day, so he fills up the gas tank to feel productive during his summer vacation from school. His classmate came along to try to make the wait time pass more quickly. 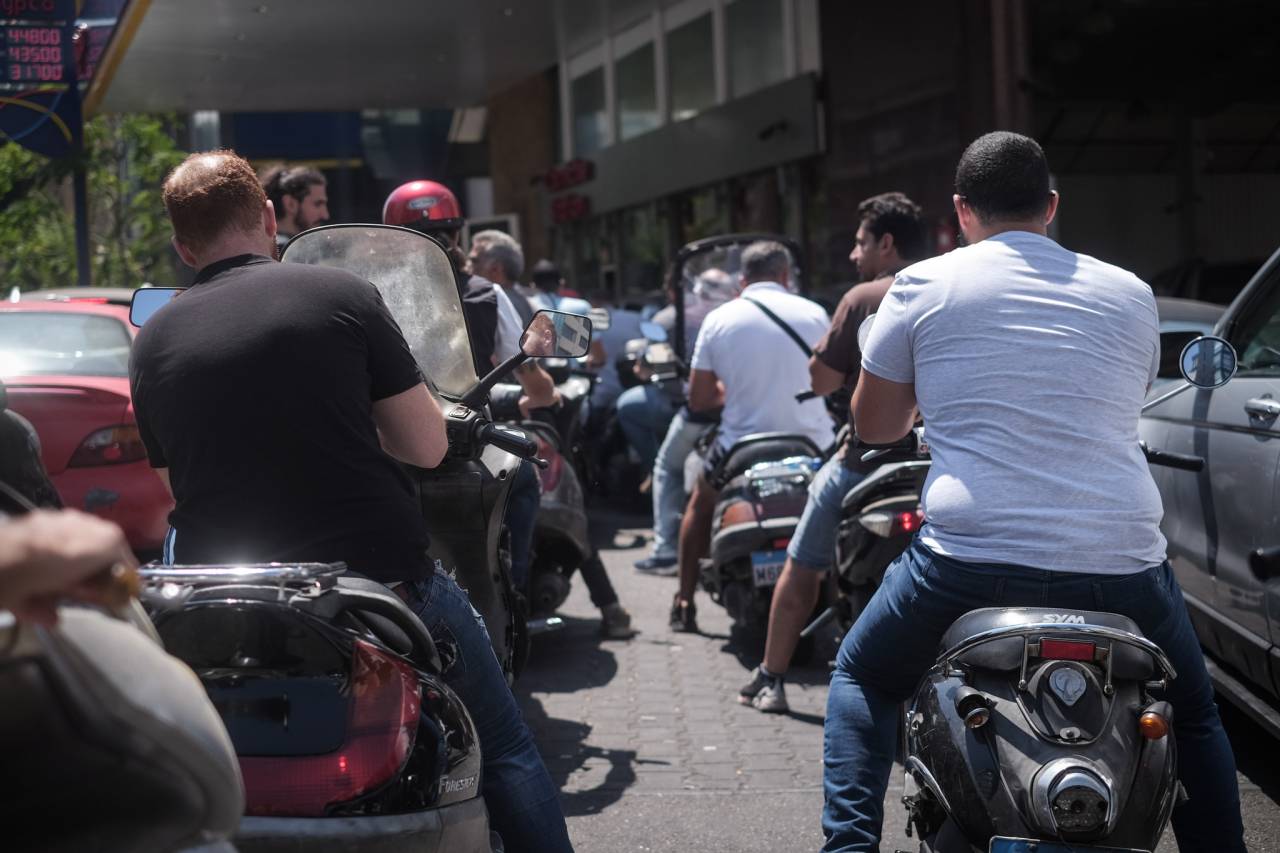 Still others have figured out their go-to stations, in some cases driving half an hour or longer to a station they know will fill a tank all the way up rather than having to wait hours at a station only to fail to get petrol. Since the early days of the shortages, many Beiruti residents have gone all the way to the Total station in Jiyyeh, near Saida, which has a large number of workers and pumps and has never imposed limits.

Many people who live farther south, where gas has been less accessible, are coming north.

“I came all the way here from Sur because most gas stations are closed in my area,” an unregistered taxi driver told L’Orient Today.

Meanwhile, residents from Tripoli are driving all the way to Batroun, about 30 kilometers away, because the few local gas stations that have stayed open are overcrowded, and almost all of them have a sales cap, a taxi driver in Tripoli said.

These adaptive methods are born of necessity as politicians fail to resolve the crisis.

Banque du Liban has blamed the gas shortage on smugglers secreting gas stocks from Lebanon to Syria, and on fuel importers allegedly hoarding large amounts of fuel in order to sell it at higher prices in case subsidies end.

Meanwhile, importers have said BDL is not paying out invoices for subsidized essential goods, not only fuel but also medical supplies and, more recently, sugar.

In Tripoli, black markets have burgeoned as a majority of gas stations have been forced to close because of shortages — or, according to some, because the fuel was smuggled to Syria.

Back at the Hypco station in Corniche al-Mazraa, Mohammad Hassan Haj, a 30-year-old van driver for a maintenance company, explained that his company had asked him not to provide any services outside Beirut in a bid to save on gas expenses. Although Haj said he is not worried about the subsidy for fuel ending, he added, “God help the ones who pay for it themselves.”

A man nearby on a motorcycle chimed in, “When fuel is not subsidized anymore, I will do what the energy minister asked us to do and will start riding a donkey like our grandparents did,” referring to a statement by caretaker Energy Minister Raymond Ghajar, who hinted that people who could not afford fuel when the subsidies get lifted should figure out alternative transportation.

In the absence of a government response to help people cope with shortages, private sector groups such as the land transport syndicate are negotiating their own solutions. The head of the land transport union, Bassam Tlais, announced that the Coral gas station in Beirut’s Raouche will service exclusively taxi, van and bus drivers.

On Tuesday, taxi drivers lined up at the station while a syndicate employee checked their registration papers. Although some griped about the station’s sales limit of LL50,000 and the more than 20-minute wait, others were pleased with the initiative.

“The wait is very acceptable here and is better than waiting in longer lines for hours and ending up without gas,” said 40-year-old Samah al-Haj, who has been working as a taxi driver for four years. “If they solve the sales limit issue, it would be an excellent measure,” she added.

While many Lebanese have for now found workarounds for fuel shortages, the gas crisis has become yet another factor pushing those who can travel to leave the country.

Mohamad Hamdan, 27, who has been living in France for four years and recently came to visit home, told L’Orient Today that he recently waited three hours at a gas station only to end up with no fuel, and then got stuck on the road when a political figure was passing by and blocked traffic.

“Lebanon is where the people I love the most and my family are, but the situation is so bad, I don’t even consider staying,” Hamdan said.

“Having to wait in gas lines is the most humiliating thing I have done in my life,” he added.

BEIRUT — At the Medco gas station in Beirut’s Tariq al-Jadideh neighborhood, the scene was typical of a fuel line in Lebanon: chaos, barely controlled.Drivers formed long queues that blocked most of the main road, trying to overtake one another as station employees begged them to be patient. A 60-year-old woman observing the rush shouted, “You all deserve this after electing such...

Thrift shops enable Lebanese to remain on top of trends, despite crisis

Death or prison? Families of shipwreck victims imagine the worst