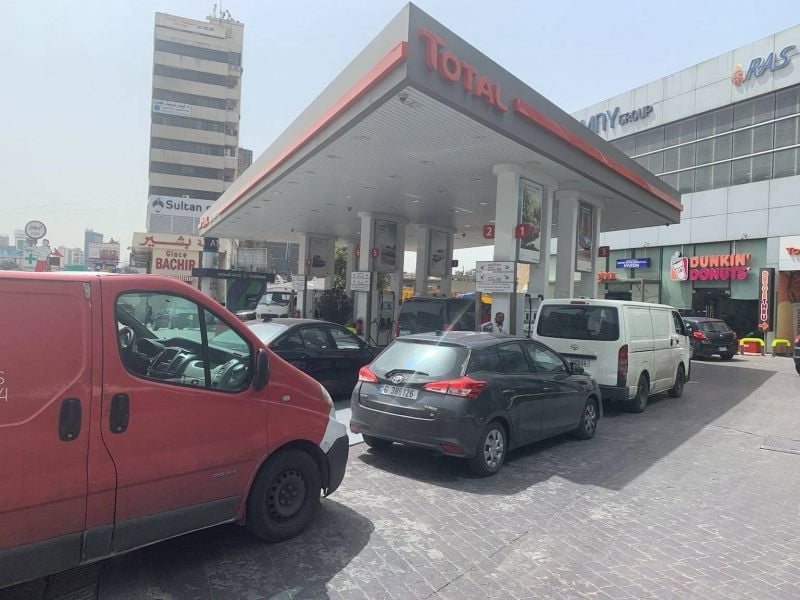 Cars and mopeds have been backed up at the pumps in recent days amid an apparent fuel shortage in the country. (Credit: Georgi Azar/L’Orient Today)

BEIRUT — A familiar scene has re-emerged at Lebanon’s gas stations over the past few days. Cars and mopeds are backed up at the pumps, spilling over onto the streets as they wait to fill their tanks.

Some stations have cordoned off their pumps altogether, forcing motorists to visit multiple stations to refuel.

Sources told L’Orient Today that the central bank is delaying payments to foreign suppliers, which is causing backlogs to deliveries and forcing local importers to limit distribution.

“Local fuel distributors are not giving out fuel in sufficient quantities, because the ships carrying it have not been paid,” said Georges Brax, a member of the gas station owners’ syndicate and the president of Brax Petroleum, a gas station chain. “They will not unload their cargo until they receive payment.”

The fuel shipment for one major fuel supplier, who spoke on condition of anonymity, waited off the coast to unload for 10 days. It docked Wednesday.

The central bank provides importers of essential goods, such as fuel, wheat and medicine, with US dollars at the official rate of LL1,507.5 to the dollar so that they can purchase goods from abroad. This amounts to an effective subsidy on the goods, enabling the providers to sell their products to consumers close to the official rate, despite rampant inflation in the country.

BDL covers 90 percent of the dollar value of fuel imports, which the importers reimburse at the official rate. The importers must cover the other 10 percent by purchasing dollars off the parallel market at the unofficial rate, which in recent months has climbed to higher than LL15,000 to the greenback and is now trading around LL12,000.

Importers of other subsidized goods, such as pharmaceuticals and medical equipment, say delays at BDL have also impacted their ability to meet market needs, contributing to shortages at pharmacies and hospitals.

The central bank may be delaying payments for fuel shipments to save its rapidly dwindling reserves, says Mark Daou, an energy sector analyst whose family owns a chain of gas stations.

“They are minimizing what they are using up and rationing indirectly,” he said.

Naaman Naddour, a senior director at BDL and the head of its foreign exchange and international operations, denies any delays in payment from the central bank.

“The oil importers are asking to accelerate our process ... [which] requires the necessary time to check and proceed,” he said.

Caretaker Finance Minister Ghazi Wazni told Reuters last week that BDL has only about $15.8 billion remaining in foreign currency reserves and that the amount available to spend on subsidies for essential goods can last a maximum of two more months.

The delay in paying foreign suppliers on time is causing another problem for local importers, Daou said. For each day fuel tankers are anchored and awaiting payment, the importer in Lebanon is charged a fee, known as a demurrage.

“Several importers have told me they had to stop importing because they can’t handle the demurrage any more,” he added.

Not all of Lebanon’s gas stations are currently running low on fuel, as each station’s stock depends on their supplier and how recently they have received a delivery. But Brax said residents shouldn’t expect the irregular supply to end anytime soon.

“In a few weeks, when a couple of ships are paid and unload their fuel, the fuel stations that are currently running low will have a supply again,” Brax said. “But by that time, others will be running out.”

Strikes and temporary closures by gas stations have become a regular sight over the past year or so, and Brax said the worst is yet to come.

“We still haven’t reached the point of catastrophe,” he said. “We are worried about what will happen if subsidies are removed.”

The government plans to reduce its coverage of fuel payments from 90 percent to 85 percent in the coming months, Wazni said in an interview with Bloomberg News in mid-March. This will lead to a gradual increase in fuel prices, but this has not yet begun, according to Brax and Daou.

For Daou, the solution to the current difficulties importers are facing is bleak, requiring a liberalization of the fuel market that would see the central bank’s fuel subsidies end and gasoline priced at global market rates or their equivalent on the lira’s parallel market.

“At the moment, even high-income people benefit from subsidies,” he added. “Subsidies should be lifted, with some support offered to public transport workers — that’s it.”

“We all know BDL is running out of dollars,” Brax said. “So from now, there needs to be a clear plan to manage subsidies and assess the impact of removing them.”

BEIRUT — A familiar scene has re-emerged at Lebanon’s gas stations over the past few days. Cars and mopeds are backed up at the pumps, spilling over onto the streets as they wait to fill their tanks.Some stations have cordoned off their pumps altogether, forcing motorists to visit multiple stations to refuel.The blame, fuel suppliers say, falls squarely on Banque du Liban.Sources told...