Federalism in Lebanon, a cure-all or a sham?

Some of those calling for the establishment of a federalist system in Lebanon believe that “social identities” are at the root of the country’s political tension — a vision criticized for its narrowness and seen as dangerous in the local context. 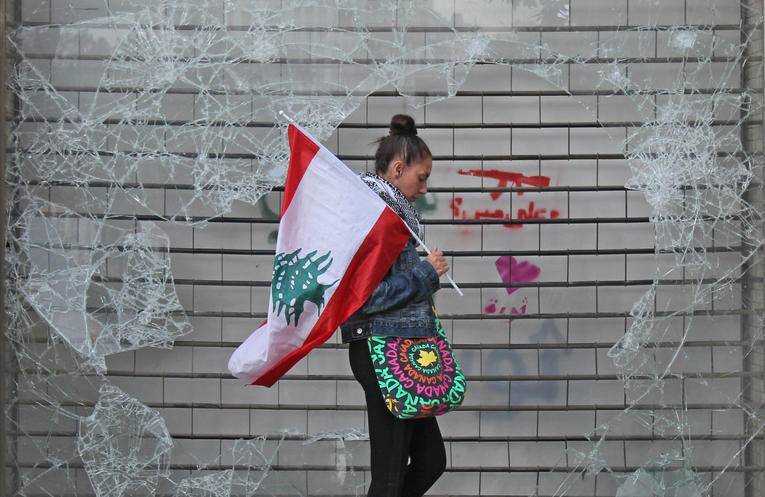 An anti-government protester walks along a street in Beirut in October 2019.(Credit: Ibrahim Amro/AFP)

“The difficulty lies not so much in developing new ideas as in escaping from old ones,” John Maynard Keynes wrote.

With every crisis in Lebanon, an old idea seems to make a comeback in the public debate, and in recent weeks it gained even more traction: the establishment of a federal system as a solution to most of the country’s woes.

Footage from the show made the rounds on social media, sparking debate between supporters and detractors of this system of government, which, in the current Lebanese context, provokes as many fantasies as rejections.

The Oct. 19, 2019, uprising was an exceptional moment in the history of Lebanon, during which citizens of all faiths went to the street, calling for, among other things, the fall of the sectarian system — a system that many believe cannot be part of the country’s future.

Certain upholders of federalism consider that “social identities” are at the root of political tension and are in favor of a Lebanon divided into sectarian cantons.

Edgar Abawatt, a lawyer of the Beirut Bar Association, told L’Orient-Le Jour that a new federalist party will soon see the light of day.

“We are currently finishing up the party’s statutes,” Abawatt, who is also one of the party’s founding members, added.

The political project, which is being developed by this group of “friends,” advocates for the administrative division of Lebanon into cantons, “following socio-economic metrics.” In the group’s vision, each administrative entity would have its own laws in civil, economic and judicial matters, with established courts, a police force and a parliament to legislate on local affairs.

But what about Beirut?

“The capital is easily divisible into sections according to the predominantly sectarian neighborhoods,” Abawatt said.

According to the FedLeb.org website, which details the theory of Iyad Boustany, a political activist in favor of a different vision of the federal project, Lebanon has 1,633 villages. The towns that are landlocked in a canton of a different sect would be subject to the regulations of the canton of their own sectarian affiliation. In other words, if a Christian village is situated in a Shiite canton, it would follow Christian jurisdiction and not Shiite laws.

However, in the current context, the establishment of a federal system will not be the answer to any of the country’s problems, including the predicament of impossible governance, notably in foreign policy, the banking system crisis and — most significantly — Hezbollah’s weapons.

According to Hicham Bou Nassif, an assistant professor at Claremont McKenna College in California, “a federal system in Lebanon cannot be done without sovereignty and neutrality first.”

“What must be absolutely done today is to disarm Hezbollah and thus restore the authority of the state over the entire country,” Bou Nassif, who is a staunch supporter of a federal project in Lebanon, told L’Orient-Le Jour.

The concept of federalism, however, appears to be a taboo subject today, reminiscent of the dark days in history.

The idea germinated with the onset of the 1975–90 Civil War, when some Maronite clergymen and Christian leaders developed the view that the only way out of the armed clashes was to divide Lebanon into sectarian cantons.

However, other Christian leaders, like Raymond Eddé, opposed this project, which contradicted the vision of Greater Lebanon put forward by Patriarch Elias Hoayek.

Contrasting with the secessionist and federalist leanings of Christian parties of the time, who felt their existence was threatened, the Maronite clergyman was attached to the idea of Greater Lebanon, which later became the Lebanese republic, and rejected the creation of new borders within the country.

Early in his political career, assassinated president-elect Bashir Gemayel was also one the main proponents of federalism. He later recognized the difficulty of implementing such a project and would run for the presidency as a leader of one Lebanese nation.

In the current political scene, no mainstream party posits the establishment of a federal system.

Lebanese Forces leader Samir Geagea does not oppose the idea head on but suggests that the project is doomed to remain a utopian notion because it is not endorsed by other political parties.

In the local context, the notion of federation sometimes implies secessionist leanings and appears to be more closely modeled on the post-2003 Iraqi model than that of Switzerland or Germany.

Lebanese defenders of federalism seem to relegate an individual to his or her sect, which they believe determines their behavior, at least in part.

“Look at the modern history of Lebanon, you will find a series of conflicts between Christians and Muslims, who, throughout the wars at home and abroad, were constantly on opposing sides,” Bou Nassif argued.

This reading of events, however, can be seen as undermining the idea of Lebanon as a shared living space for all its inhabitants, regardless of sect

Karim Bitar, a professor of political science at Saint Joseph University, believes that the idea of a federal system was put forward by “well-intentioned people, who noticed that the system was dysfunctional.”

“These people, however, built [the idea] on erroneous premises, mainly that Lebanon’s problems are essentially related to [sectarian] identities. This is dogmatic reasoning. Lebanon’s war had complex demographic, economic and geopolitical causes. We need to get over this sectarian tribalism,” he added.

Regionalism and political reinforcement at a local level could potentially appeal to Lebanese who no longer believe in the political democratic representation. Conversely, federalism which advocates for religion as the common denominator, appears for some to be a leap backward — a retrograde project at a time when a portion of the population is calling for the separation of religion and state.

One important thing to remember is that a federal system insinuates that the ruling elites of the same sect get along well and are not enticed to wage wars on each other.

“The latest studies show that Christians killed more Christians and Muslims more Muslims during the fratricidal wars from 1975 to 1990,” Bitar said.

The idea that a federal Lebanon would suddenly transform some zones into El Dorado — while every area in the country deeply overlaps with the others economically and culturally — seems just too far-fetched.

The risk of Lebanon being further shattered by regional and international powers is a more plausible scenario.

If the emergence of Hezbollah suggests the collapse of the Lebanese state, what would happen if the South could one day pass its own laws and regulations?

“How would someone like Lokman Slim be able to exist in a Shiite canton?” Bitar asked, referring to the Shiite erudite intellectual who was assassinated on Feb. 4.

The renewed interest in a federal system appears to be symptomatic of a Lebanon in crisis and running out of ideas.

“Lebanon needs modern, liberal and democratic ideas, with decentralization, of course. The risk of secession within a federal system is real, which is extremely dangerous,” Bitar concluded.

“The difficulty lies not so much in developing new ideas as in escaping from old ones,” John Maynard Keynes wrote.With every crisis in Lebanon, an old idea seems to make a comeback in the public debate, and in recent weeks it gained even more traction: the establishment of a federal system as a solution to most of the country’s woes.On June 10, several proponents of this view appeared on...