A new round of the war of prerogatives broke out between President Michel Aoun and Parliament Speaker Nabih Berri, with the latter being backed by Hezbollah. 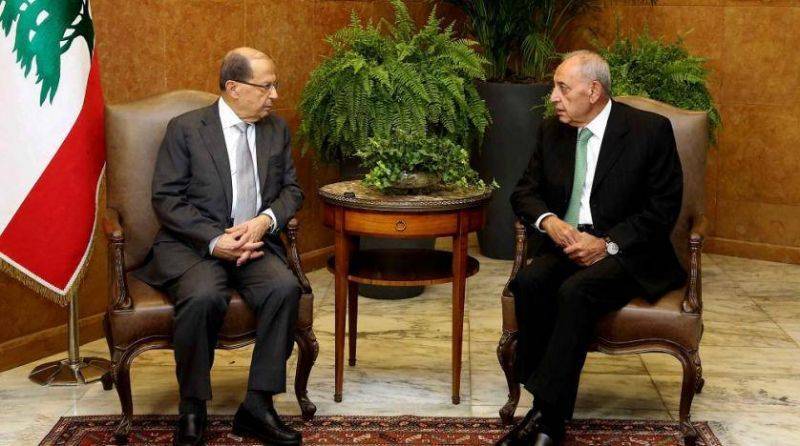 Aoun receives Berri in November 2017 at the Presidential Palace. (Credit: Dalati and Nohra)

The political feud over the cabinet formation appears to have taken a new turn. The tug-of-war is no longer between President Michel Aoun’s camp and Prime Minister-designate Saad Hariri, but rather between the president and Parliament Speaker Nabih Berri.

In recent days, the speaker has been showing signs of unwavering support of Hariri — something that has rendered Baabda even more isolated.

The quarrel between the two broke out on Tuesday, when the president, clearly upset with Berri’s support of Hariri, issued a statement in which he made cutting remarks in reference to the Parliament speaker without naming him. Aoun implicitly accused Berri of “intervening” in the cabinet formation process and ignoring “whether deliberately or unintentionally” the constitution’s provisions.

With this move, Baabda appeared to be undermining the initiative of Berri and Progressive Social Party leader Walid Joumblatt aimed at ending the political paralysis through the formation of a cabinet of 24 ministers in which no political bloc holds a “blocking third” — or effective veto power.

Twenty-four hours later, Berri responded to Baabda’s attack with an equally strongly worded statement, which was carefully issued on behalf of the Parliament’s presidency and not signed in Berri’s name.

“It is in the name of the Lebanese people that I have acted and continue to do so,” the statement read in a bid to grant a certain popular and constitutional legitimacy to the legislature head’s efforts to break the stalemate.

“The designation of the prime minister is not decided by the president, but it is the decision of the MPs, and therefore the legislative power. The person in charge of leading parliamentary consultations for the cabinet formation is the prime minister-designate (according to Article 64 of the constitution),” Berri said in the statement.

“I have the right, at the request of the prime minister-designate, to help him [in his mission],” he added, noting that the head of state’s “prerogative is to sign the decree of the cabinet formation with the Parliament speaker […].”

“In your remarks yesterday [Tuesday], you clearly stated that you did not want Saad Hariri to preside over the government. But you have no right to reject him. The designation does not come from you,” Berri said, addressing Aoun, and confidently adding that his “initiative will continue.”

With this, the legislature head appeared to reduce the president’s role in the cabinet formation process.

“Berri escalated the tone to remind President Aoun of his limits and prerogatives,” a source close to the speaker told L’Orient-Le Jour, assuring that Berri will carry on with his efforts to speed up the formation of Hariri’s cabinet.

Berri is trying to give new momentum to his initiative, backed by Hezbollah, as the party’s Secretary-General Hassan Nasrallah clearly indicated on May 25. For some, Hezbollah is now stuck between its two traditional allies.

While the Shiite party needs the Christian political cover provided by the Free Patriotic Movement, it remains keen on Hariri forming a cabinet so as to avoid a Sunni–Shiite confrontation in the street at a time when popular discontent could explode at any moment amid the unprecedented social and economic crises gripping the country.

Hezbollah is well aware that the stakes are high, but it appears that it has already chosen a side. “We stand by the speaker and support his efforts aimed at forming the government,” Hussein Khalil, Nasrallah’s political adviser told L’Orient-Le Jour.

“We uphold Berri’s initiative,” he said, taking a jab at the president and his camp.

Khalil added that “99 percent of the portfolios have already been allocated” to the political forces, but pointed out some challenges, notably the naming of two additional Christian ministers in the cabinet of 24 ( a right that the president insists on), the FPM’s participation in the cabinet and Aounists’ vote of confidence in the government.

“Hariri is still designated to form a government. And, as long as he is designated, we are not looking for a substitute,” Khalil added — another jab at Baabda, which is accused of wanting to brush Hariri aside.

“Berri did not inform Hezbollah that he was going to release the statement. But al-Manar TV channel, Hezbollah’s media outlet, broadcast the full press release, using the term “urgent,” a source close to Ain al-Tineh, Berri’s residence, said.

The Democratic Gathering bloc, of which the PSP is the main component, also expressed support for the efforts of Berri, who met with Joumblatt on Wednesday afternoon.

Clearly isolated, Baabda escalated its tone toward Berri, reiterating the rhetoric that Aoun never made any demands and saying that he supports Berri’s initiative.

The presidency denounced Berri for speaking on behalf of the Lebanese people and preventing the head of state from having a minister in government. Ain el-Tineh replied with another statement, noting that Aoun himself had refused that some ministerial portfolios fall under the share of former President Michel Sleiman when the latter was in office.

In what can only be interpreted as a sharing of roles between the president and the FPM, Aoun’s son-in-law Gebran Bassil was keen to show that he is in favor of a cabinet led by Hariri. “An option we adhere to under the constitution,” he said in a statement following a parliamentary joint committee meeting on June 16. Later that day, Bassil met in Bayada with Wafic Safa, a top Hezbollah official familiar with the government formation process.

How will Hariri benefit from the two Shiite parties’ renewed support of his mission to form a cabinet? Future Movement circles have not given a clear answer so far. A relative of Hariri, however, said that he was seriously considering presenting a new cabinet lineup to the head of state, without giving any further details.

The political feud over the cabinet formation appears to have taken a new turn. The tug-of-war is no longer between President Michel Aoun’s camp and Prime Minister-designate Saad Hariri, but rather between the president and Parliament Speaker Nabih Berri.In recent days, the speaker has been showing signs of unwavering support of Hariri — something that has rendered Baabda even more...

Saudi, French leaders strike deal over Lebanon, capital controls back on the table, Parliament to meet:...