Panic, turmoil, then bitter relief your savings have lost just 70 percent of their value: 24 hours as a Lebanese depositor

Confusion reigned this week for many Lebanese following a central bank decision to suspend and then resume dollar withdrawals at the LL3,900 exchange rate. 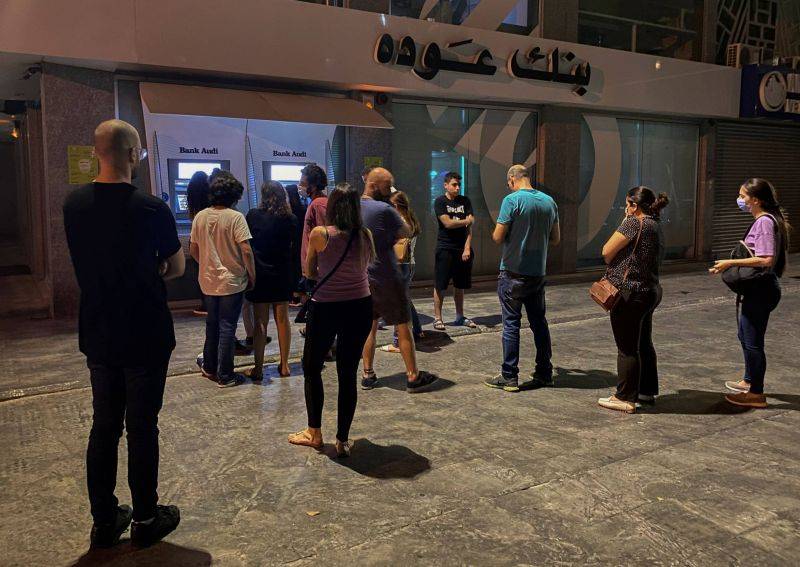 People wait at an ATM in Beirut to withdraw money on Wednesday night. (Credit: Mohammad Azakir/Reuters)

After having spent hours waiting in line over the preceding days to fill their gas tanks, the Lebanese people again queued up on Wednesday night and Thursday morning, this time at ATMs and bank counters. They lined up desperate to withdraw money from their so-called local dollar, or “lollar,” accounts at the LL3,900 rate while they still could. These scenes were reminiscent of the first days of the economic and financial crisis that has been gripping the country since 2019.

In the span of 24 hours, Lebanese depositors went through it all: panic, anger, urgency and then finally a sense of resignation and hopelessness. This is essentially the everyday life of some.

Banque du Liban had announced on Wednesday the suspension of circular 151, which allows depositors to withdraw their dollars from commercial banks at an exchange rate of LL3,900. BDL’s decision came after the State Shura Council, Lebanon’s highest administrative court, issued a provisional ruling on Monday for banks to reimburse dollar deposits in dollars, rendering the LL3,900 rate unlawful and, because banks lack sufficient dollar liquidity to meet withdrawal demands, effectively reinstating dollar withdrawals at the official peg of LL1,500. However, a day after suspending the circular, BDL reversed its decision, and it went into effect once again.

But by the time BDL backtracked on its decision, the Lebanese people had become the main victims of this masquerade, as has always been the case in this country.

“Go [to the bank] and withdraw your money,” a woman from the southern suburbs urges her niece over the phone. “It [the dollar rate] is back at LL1,500,” she insists, trying to prove to her niece the urgency of the situation.

It’s Wednesday night and people are beginning to line up at ATMs. In Downtown Beirut, an old man shakes his head, desperate, as the ATM returns his card but no money. A woman stands nearby, phone in hand, to take photos of these déjà-vu scenes.

Meanwhile, angry groups use cars and burning tires to block roads at the so-called Ring bridge in Downtown and in Jal al-Dib.

“Of course I panicked. When I started to hear the rumors, I tried to do everything in my power to withdraw all my money … Khalas [enough], even if it [the dollar rate] came back to LL3,900, I will withdraw everything, that is enough,” Layale*, a woman in her 40s says furiously.

Some people, however, opted not to withdraw all of their “lollars.”

Georges*, a man in his 70s, stands in front of an ATM near his friend and puts away a bunch of cash he’s just withdrawn. He is used to withdrawing a small amount of his “lollars” each month to live off, since his salary in Lebanese lira is no longer enough to cover his all needs.

“I do not intend to withdraw them at this rate, I prefer to leave them [in the bank]: either they disappear completely, or a solution will be reached,” he says.

“Do we have another choice?” his friend cuts in angrily.

The Lebanese pound is still officially pegged at LL1,500 to the dollar. Since April 2020, local banks have been allowing their depositors to withdraw dollars in the local currency at a rate of LL3,900 to the greenback — with each bank imposing its own withdrawal limits.

“They are all thieves,” Georges adds.

Another woman, also in her 70s, decided to do the same as Georges. “Despite everything that has happened in Lebanon, this is the worst I have seen,” she says.

By Thursday, Christine, 61, is not angry, but rather completely desperate. “It’s over for Lebanon,” she says sadly.

“I had never felt before the way I did yesterday — despair and disgust. Of course I am relieved the decision was reversed, I am one of the few people [who have “lollar” accounts]. But the rest do not have accounts in ‘lollars,’ and for them I feel more pain,” she continues, stressing that BDL’s erratic policy changes only affect a small minority of people.

More than 1 million bank accounts are estimated to be in “lollars,” but more than half of the population don’t even have bank accounts.

“I don’t have a dollar [account], which is one less thing to worry about in this country,” a woman in her 40s says, as she laughs at the situation.

‘I can’t stand them anymore’

For Sirine* there is no panic, only rage. “I won’t be calming down anytime soon,” she says.

The reversal of the decision left lingering doubts and failed to reassure the people.

“I can’t stand them anymore. I’ve had enough. I don’t even want to talk about it,” says a trader in Mar Mikhael as she expresses her disgust at the ruling class just an hour after the decision to resume payments at the LL3,900 rate was announced following a “judicial and financial” meeting in Baabda.

“I believe the situation was clearly a political game. But honestly, I did not expect it to be this ridiculous,” Rania, who works in real estate, says.

Rania was referring to the meeting that took place between the “winning trio” (or not so winning trio) of the day: BDL Gov. Riad Salameh, head of the State Shura Council Fadi Elias and President Michel Aoun. In a single meeting, they decided to bypass a decision by the Shura Council as if it was an internal regulation adopted at a sports club.

The return to “normal” for the “lollar” accounts also generated a slew of sarcastic comments on social media.

“A 70% loss on dollar deposits is a good deal now,” an internet user says sarcastically, referring to the fact that withdrawing money at the LL3,900 rate implies a 70 percent haircut, since the dollar is currently trading at LL13,000 on the parallel market.

“What’s crazy is that the return to the LL3,900 rate became a popular demand last night. They are toying with our emotions,” Rania concludes.

*Names have been changed.

After having spent hours waiting in line over the preceding days to fill their gas tanks, the Lebanese people again queued up on Wednesday night and Thursday morning, this time at ATMs and bank counters. They lined up desperate to withdraw money from their so-called local dollar, or “lollar,” accounts at the LL3,900 rate while they still could. These scenes were reminiscent of the first days...