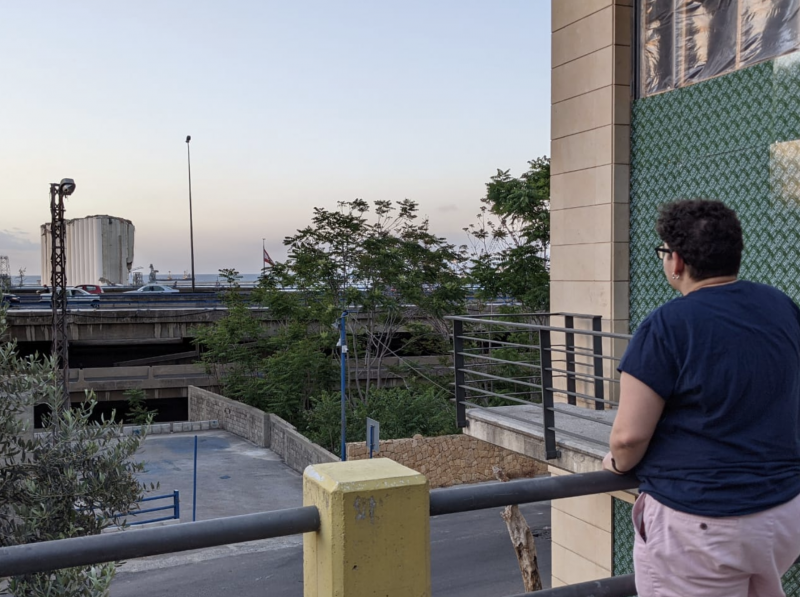 Rasha Moumneh takes in the Beirut port from a distance. (Credit: Lina Mounzer)

It was supposed to be a good month. My friend Rasha was coming back to visit from the US. Fully vaccinated, she was arriving as an emissary of an eventual world beyond the pandemic, one in which people could finally hug one another again. Rasha is one of my oldest and dearest friends, one of the many beloved people that this country has forced to live elsewhere.

I hadn’t seen her since the last time she was here, in December 2019, when she came to see with her own eyes what she had only been receiving second hand. Was it true that people had revolted in such numbers? Was it true that everything had been so transformed? Like so many who had been watching from abroad during the time of the uprising, she had come both to bear witness to the new reality and to try and experience it for herself. She arrived when our exhaustion here had already set in; the winter rains had begun and so had the government’s heavy crackdown. But Rasha still marveled at the energy, at the full takeover of the squares in Beirut and Tripoli, at how many people were ready to brave both the rain and the tear gas, rubber bullets and batons. She countered our disappointment with the assurance that change was still happening, that it was an electricity that could be felt in the air. And in so doing, she allowed us to see that hope was not lost.

This time Rasha was once again coming to take in a reality-shattering transformation: the port explosion. Again, it was one she had watched from abroad, consuming the news of something unspeakably massive in tiny shreds of media: videos, pictures, voice notes, phone calls, and texts. A collage that helped her piece together the scale of damage to the city and its people, but not the actual ramifications of that damage, not the way it had ended one world and set in motion another. And of course there was the economic crisis, which had already begun when she was here last, but its effects had not really begun to make themselves known.

We haven’t had many people visiting from abroad this last year. We have been cut off from all the communities that sustain us, which here include the innumerable loved ones who at one point or another threw up their hands in frustration and left to try and make better, more stable, more dignified lives elsewhere. Living in Lebanon is like living in a transit lounge, true: everyone is always leaving. But the beautiful thing about it is that everyone is also regularly coming back. This year has denied us even that: those too-few, too-short hours of sustenance with our loved ones that then allow us to make it through the next desert of time without them.

Rasha had come to see us, of course, but mostly she had come back to see what had become of us.

“I need to connect before everything becomes unrecognizable”, she said. “So that I don’t lose this place completely.”

I wondered what she would in fact see, or rather, how soon it might become visible to her. And of course I wondered what I might see through her eyes that I had forgotten to see for myself.

Certainly, many of the things we now have to live with are immediately apparent. The prices, for one. (“It’s like being in a foreign country,” said Rasha. “The numbers are just numbers, they mean nothing.” Everyone assured her that it’s in fact the same for us.)

There is also the sheer number of destitute people in the streets. The absence of traffic lights and traffic rules. The longer hours without electricity. The traffic jams that turn out to be kilometers of cars queuing for gas. The lack of medicines. The bizarre new brands in the supermarkets.

The thing that she was most eager and most terrified to see, however, remained unseen except in quick snatches as we drove by the port, on our way to other places. Every weekend she resolved to walk through Mar Mikhael and Gemmayzeh, and every weekend she postponed it.

I say it was supposed to be a good month, and in many ways it has been. It’s hard to dampen the joy of reunion, especially after a year that has seen too few of them. But in between all those hours of real-life connection, I, and Rasha, and practically everyone else I know, spent all their time online, watching the horrors unfold in Palestine. The savage bombardment of Gaza, and before that the attacks on people and their homes and businesses in Lydd, Haifa, Yafa, and before that the storming of Al-Aqsa with stun grenades and guns, and before that the forced displacement of families from Sheikh Jarrah, and all of these only the everyday atrocities of a 73-year long heavily armed and foreign-funded occupation. What has been most horrifying to see — though all-too familiar — is the absolute impunity with which the Israelis practice their brutality. I burned with rage constantly; my entire emotional self focused on the audacity of the violence. Not only that they can do this, but that even with all the evidence live on video, the people they are brutalizing cannot appeal to any sort of higher authority for justice.

This is a month, too, that has seen Bashar al-Assad sadistically cast a vote for himself in Douma, on the very grounds of a chemical massacre his regime perpetrated three years ago, and also seen Iraqi protesters killed for protesting their own deaths, the targeted assassinations by known perpetrators that have been picking off activists one by one. There is no recourse anywhere to any kind of authority that might mete out justice. How could there be, when the notion of authority itself in our countries is anathema to justice? Is there any word with uglier, more oppressive connotations in Arabic than al-sulta? Across the region, the very word epitomizes impunity, epitomizes repression, savagery and death.

When Rasha and I finally did walk from the edge of Burj Hammoud to downtown and back, I found myself constantly trying to describe what it had looked like in the immediate aftermath. Almost like I was afraid she would fail to see what had actually happened to us, fail to see the incredible extent of the damage. Instead she showed me what I had forgotten, or rather, the thing that I was now taking for granted.

“I cannot believe,” she repeated, again and again, tears in her eyes, “I cannot believe they did this and got away with this.” Of course the “they” went without saying. Al-sulta. Still audaciously in power. Still actively blocking any means toward accountability. The smiling faces of the 204 people who died in the explosion, captured in haunting sketches that wallpaper the streets around the port, were echoed for me by the faces of the children killed by Israeli airstrikes, their photos published in the New York Times. How disgusting it was to hear our politicians condemning Israeli violence when, even if on a different scale, they are no less brazenly murderous, and just as adept at evading justice.

Lina Mounzer is a writer and translator in Beirut. Her column appears monthly in L’Orient Today and L’Orient-Le Jour.

It was supposed to be a good month. My friend Rasha was coming back to visit from the US. Fully vaccinated, she was arriving as an emissary of an eventual world beyond the pandemic, one in which people could finally hug one another again. Rasha is one of my oldest and dearest friends, one of the many beloved people that this country has forced to live elsewhere.
I hadn’t seen her since the...

Either submission or war