Joseph Aoun and the temptation of the presidency

Although he has denied wanting to enter political life, army chief Joseph Aoun’s political path so far makes him a natural candidate in the next presidential elections. 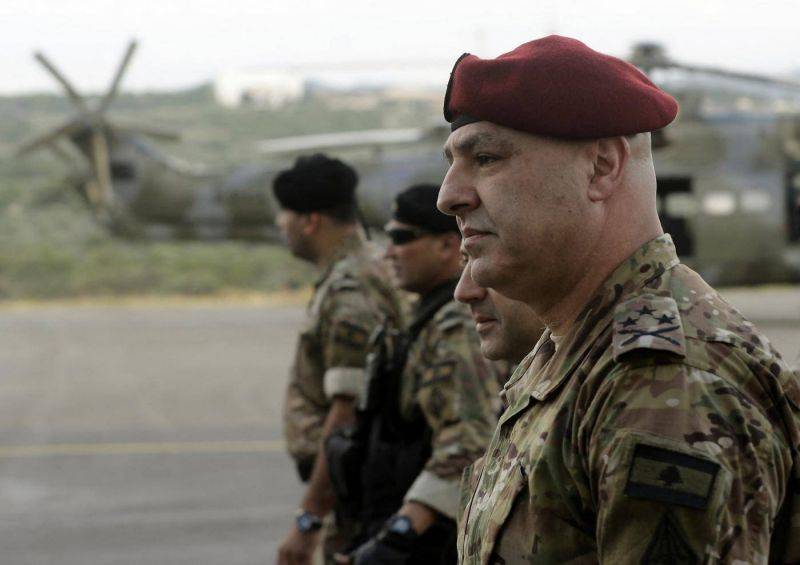 It is perhaps within the military that symbolism carries the most significance. Marching past the French troops alongside French armed forces chief François Lecointre in the courtyard of the Military School in Paris on May 26, Lebanon’s army chief, Gen. Joseph Aoun, might have realized that his role had taken on a new dimension.

On the same day and for the first time in Lebanese history, an army chief was received at the Élysée Palace. French President Emmanuel Marcon welcomed Aoun in the presidential palace as if to underline the significant role he has acquired among Western observers as the last credible representative of Lebanese institutions.

With the Lebanese Army crumbling due to the economic and financial crisis gripping the country, the West has decided to keep the military establishment on a drip, by stepping up financial aid to prevent it from further deterioration.

France has in fact called for a conference in support of the Lebanese Army that could be held in the coming weeks, while its commander is slated to visit the United States in June.

Aoun has become the privileged de facto interlocutor of both Washington and Paris. He also continues to maintain good relations with each component of Lebanon’s political class and society — a combination that makes him a serious candidate in the coming presidential election, slated for next year. The last three tenants of the Baabda Presidential Palace, all of whom hail from the military, ascended to the presidency under different circumstances.

Cautious by nature, Aoun says that he is not considering running for president but wants to focus on his current military task, according to his close associates.

However, the army chief’s political path appears flawless so far, allowing him to be seen as a guarantor of stability who does not give in to the temptations of becoming a strong man.

‘The Americans told him he could be the next president’

Aoun began his career in the Commando Regiment and cut his military teeth during the War of Elimination launched by Michel Aoun against the Lebanese Forces militia in 1990. He built a reputation as a man who refuses to surrender, especially when the Adma barracks, where he was deployed, were besieged.

Today, the army chief is close to the president. Throughout his military career, he has maintained good relations with all political forces, notably Hezbollah, with which he was constantly coordinating during his military service in Marjayoun in the south.

Aoun was appointed army chief in March 2017 by the head of state, who considers him to be one of his loyalists, even though Gebran Bassil, the president’s son-in-law, preferred another candidate to head the armed forces.

Commander of the 9th Brigade in the Bekaa border town of Arsal, Aoun played a prominent role in the battles between the Lebanese Army and the Islamic State and Nusra Front in 2015.

In 2016, he was at the heart of the bilateral talks between Michel Aoun and Saad Hariri a few days before the presidential election. After he was elected president, Michel Aoun sought to replace then-army chief Jean Kakwagi, with whom relations were strained, with a man from within his own camp.

Joseph Aoun is also well regarded by the United States, as the two cooperated closely in the fight against terrorism.

In May 2019, the army chief headed to Washington for a visit that seemed to mark a turning point in his career, and for good reason. It was the first time he was seen as a potential candidate for the presidency, something that earned him criticism and jealousy, particularly within the Baabda entourage.

The visit also complicated his relations with Hezbollah, especially since the Americans raised with him the subject of arms smuggling and military capacity building in southern Lebanon.

“The Americans told Joseph Aoun that he could be the next president,” a source close to Hezbollah said.

This angered Bassil, who continues to consider the army chief as his main challenger in the next presidential election.

“He does everything to stay away from politics because this would be at the expense of the army,” a close associate of the army chief said, adding that Aoun could ascend to the presidency against a backdrop of an international and local compromise.

One month after his visit to the US, the army chief was warmly welcomed in Saudi Arabia, where he was received as a head of state, despite the Saudis’ strained relations with President Aoun and their desire to disengage from Lebanon.

This suggests that Riyadh and Washington share the same point of view of the army chief: someone who can limit Hezbollah’s influence.

The army chief’s relations with Bassil have gone from bad to worse since the beginning of the Oct. 17, 2019, uprising.

When Aoun refused to crack down on protesters, Bassil wanted his head. But the army chief’s stance garnered him further support from the international community.

At one point during the uprising, the army deployed to the Ring Bridge, the site of multiple clashes between party partisans and anti-regime protesters, to protect the latter against the provocations of some youth affiliated with Hezbollah and the Amal Movement.

Tensions were growing and any escalation could have had major consequences. To calm the situation, a meeting was organized between the army chief and Wafiq Safa, the head of Hezbollah’s coordination committee. Aoun maintained his position of protecting the protesters. But to avoid stoking tensions with the Shiite party, which took a very dim view of road closures, notably in the south and the Bekaa, the army chief agreed to reopen the roads.

During this complicated period, Aoun managed to keep the military out of political conflicts.

“He reformed the military academy, which was seen as a laboratory of political clientelism. He wants to preserve the image of a simple man of integrity,” one general said on condition of anonymity.

In November 2020, a new standoff started between the army chief and the Free Patriotic Movement leader in relation to the appointment of the director of military intelligence.

“Joseph took a dim view of this decision because he was closely working with Tony Mansour,” said a source familiar with the issue.

The rivalry between Aoun and Bassil was also noticeable in the maritime border negotiations, which the president’s son-in-law wanted to be part of.

The army handles negotiations but obeys the president’s recommendations. The head of state is accused by his detractors of using the negotiations as a card up his sleeve to improve ties with the US.

A quick agreement was reached that strengthened the army’s position and that of its leader, something that came much to Bassil’s dismay.

“Everything is fine between the commander-in-chief and the president,” said the source close to Joseph Aoun. Baabda sources also relayed the same message.

The army chief clearly does not have the temperament of a putschist. He calmed all calls for him to take power by force, being aware of the danger of such a step, even more so under such tense conditions.

However, on March 8, Aoun took the side of protesters, lambasting the ruling class for its lack of vision and its inability to propose any solution to the crisis, something that did not go unnoticed.

“Should the elections take place tomorrow, he would certainly be the winner,” a source close to Hezbollah said.

It is perhaps within the military that symbolism carries the most significance. Marching past the French troops alongside French armed forces chief François Lecointre in the courtyard of the Military School in Paris on May 26, Lebanon’s army chief, Gen. Joseph Aoun, might have realized that his role had taken on a new dimension.On the same day and for the first time in Lebanese history, an...

Gas shortages to ease, call for UN probe into port blast, Captagon bust: Everything you need to know today