For some Lebanese, the Palestinian cause recalls the demons of the past; for others, the injustices of the present 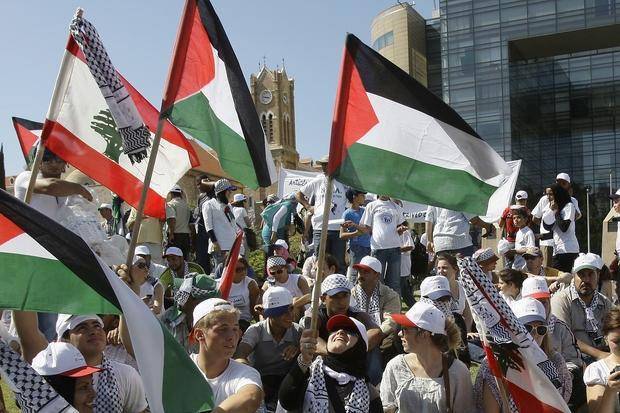 Palestinians gather in front of the United Nations building in Beirut to demand civil rights for Palestinian refugees living in Lebanon. (Credit: AFP)

Photos from the Gaza Strip and Jerusalem made headlines over the past couple of weeks, triggering a wave of solidarity in the international arena and the Arab World. While a segment of the public felt directly implicated in the events taking place on the other side of the border, many Lebanese treated them with skepticism, fear and even indifference.

“I am placid in the face of what is going on. The Beirut port blast on Aug. 4 was more than enough for me. It totally devastated me,” says Maya Kanakri, a young Lebanese artist. However, her nephew, who is barely 16 and lives in Montreal, is fired up with enthusiasm about the Palestinian cause.

Kanakri, who is in her 50s, expressed a feeling that many other Lebanese Christians from her generation share every time this bloody conflict comes under the spotlight.

As they face their own demons, including an unprecedented economic and financial collapse and a political class that has cast them adrift, the Lebanese are not monolithic in their concern about the Palestinians’ misery across the border today.

“The Lebanese problem is by far heavier … than the Palestinian problem. Today the very existence of the Lebanese entity, state and people is at stake due to Iranian expansion in the country,” says Toufic Hindi, a former member of the Lebanese Forces.

The rifts caused by the Israeli-Palestinian conflict persist in Lebanon and are more pronounced than perhaps anywhere else outside Palestine itself. Much of that owes to the history of a host country where hundreds of thousands of refugees arrived in the past century. Identified as a main factor leading to the Civil War of 1975, the Palestinian armed presence in Lebanon deflected attention from the cause that Palestinian organizations championed and that divided the Lebanese.

“The pro-Palestinian camp at the time accused the Kataeb Party — who brand themselves as Phoenicians and deny having Arab roots — of isolationism. For their part, Kataeb accused the Palestinians who were welcomed in Lebanon of being ungrateful, and blamed them for the outbreak of the war,” Tannios Deaibes, an analyst and a former member of the Lebanese Communist Party’s politburo, said.

The Palestinian cause, backed by a national front consisting of progressive parties and leftist formations, further deepened the already profound divide among Lebanese communities. This prompted a segment of Christian youth to take up arms against the Palestine Liberation Organization.

Animosity toward Palestinians grew due to the fedayeens’ aggressions against the Lebanese people during the war and, before that, the chaotic repercussions of the 1969 Cairo Agreement — a vague agreement that recognized Palestinians’ right to wage their armed struggle against Israel from Lebanese territory.

“In the Christian areas, the slogan ‘Lebanon as an alternative homeland’ for Palestinians struck terror in the minds of the Lebanese,” says Souheil Natour, a Palestinian jurist and member of the Democratic Front for the Liberation of Palestine.

The Lebanese never managed to establish themselves as a homogeneous and relatively unified society. They have not known how or have not been able to forge a national character, let alone a clear identity that transcends sectarian lines.

The Palestinian question took center stage and made internal divides worse. A part of the local population perceived the struggle to free Palestine as a burden to the country and were dragged reluctantly into the war against Israel.

The weight of geopolitics

Today, in addition to the demons of the past, Hamas and Hezbollah — Iran’s allies — are added to the equation, at a time when Iranian influence in Lebanon is a key matter of contention. Fears that the Palestinian problem could spill over into Lebanon through a potential intervention by Hezbollah have opened up new divides.

“Theoretically, the majority of Lebanese are against Israel. Yet the conflict takes a quite different dimension, in the eyes of some, once Hezbollah steps in,” Deaibes said.

The rockets fired by Hamas awakened old fears and renewed concerns of an Israeli war with Lebanon, along with the accompanying destruction.

“In the minds of the Lebanese, the line is blurred between Hamas and Hezbollah,” Deaibes said.

“What is happening between Israel and Gaza is detrimental to Lebanon. That is because such a situation would strengthen the axis of resistance in the region, even though Hezbollah did not join [the conflict] militarily,” Hindi said.

According to Ali Mourad, a lecturer at Beirut Arab University, “the Civil War ended 30 years ago. It is time to differentiate between humanitarian support, which is a principled position, and political support that could be accompanied by military support.” He called for broad support for the Palestinian cause, considering it a human rights matter, not a matter of balance of political power.

Natour recalled a token gesture by the Palestinian Authority’s ambassador to Lebanon, Abbas Zaki, who on Jan. 8, 2008, apologized to the Lebanese on behalf of the Palestinians. Three months later, the Kataeb Party followed in his footsteps.

Speaking to LBCI on May 17, Joseph Bahout, the director of the Issam Fares Institute at the American University of Beirut, said, “We can be supportive of the Palestinian cause, and at the same time perceive that Hezbollah causes a problem to Lebanon.”

Multiple analysts recognize that Hezbollah’s intervention could further divide the Lebanese population over the matter. The Syrian war scenario lingers in many of their minds. Hezbollah’s involvement could also discourage Arab youth who sympathized with the Gaza Strip in the past few days, including some in Lebanon.

Deaibes explained the visceral tie connecting — regardless of political or ideological divisions — the Palestinian protest movement against Israel with uprisings in the rest of the Arab World, and in this case, the October 2019 uprising in Lebanon.

“The [Lebanese and Palestinian] youths are faced with the same discrimination by the regimes in power and political establishments,” he said.

According to Mourad, it is about sharing the same suffering in one way or another. It is a solidarity resonating across borders that denounces the injustices confronting youths on both sides of the border. In this regard, Mourad recalls the unconditional and spontaneous solidarity that the Palestinians voiced with the Lebanese people during the Oct. 17, 2019, uprising and following the Aug. 4, 2020, Beirut port blast. The Palestinian cause is not — or is no longer — a Sunni cause or even a Muslim cause.

Today, a large segment of Lebanon’s youth is well aware of such an equation.

“It is the cause of an occupied people,” Mourad said.

Photos from the Gaza Strip and Jerusalem made headlines over the past couple of weeks, triggering a wave of solidarity in the international arena and the Arab World. While a segment of the public felt directly implicated in the events taking place on the other side of the border, many Lebanese treated them with skepticism, fear and even indifference.“I am placid in the face of what is going...