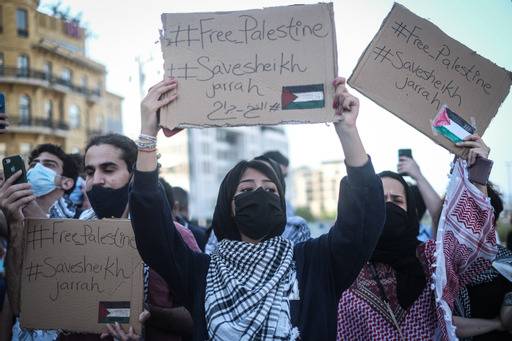 The hashtag #SaveSheikhJarrah is seen at a solidarity protest in Lebanon. (Credit: João Sousa/L’Orient Today)

BEIRUT — With Palestinians in East Jerusalem’s Sheikh Jarrah neighborhood facing displacement from their homes, young activists in Lebanon are finding new channels to showcase to a global audience what for Palestinians is an all too familiar scene.

Earlier this year, a Jerusalem court upheld a decision that would expel eight Palestinian families — about 75 residents — from land that they obtained through the UN refugee agency UNRWA following the 1947–49 Nakba (Arabic for “catastrophe”), when three-quarters of a million Palestinians were forced off their original land by the nascent state of Israel. Israel’s high court is expected to rule in favor of the families’ expulsion, paving the way for more Israeli settlers to move into the village.

The high court was scheduled to decide on the case earlier this week but postponed the decision amid mass protests.

Ahmad, a 24-year-old Palestinian refugee in Lebanon, who is presently unemployed amid Lebanon’s economic crisis, told L’Orient Today that “hearing the news [of the developments in Sheikh Jarrah] was a reminder that I’m incapable of helping because my right to go to my homeland and defend it is snatched away from me.”

Saturday will mark the 73rd anniversary of the Nakba, which also saw Palestinians forcibly displaced to neighboring countries, including Lebanon, without the right to return. According to UNRWA, more than 200,000 Palestinian refugees are currently estimated to reside in Lebanon, including those originally displaced to Lebanon during the Nakba, their descendants and refugees who recently fled Syria during the civil war there.

Many Palestinian refugees in Lebanon live in camps administered by the UN agency, where living conditions are substandard, poverty is high and recourse to justice is virtually nonexistent. 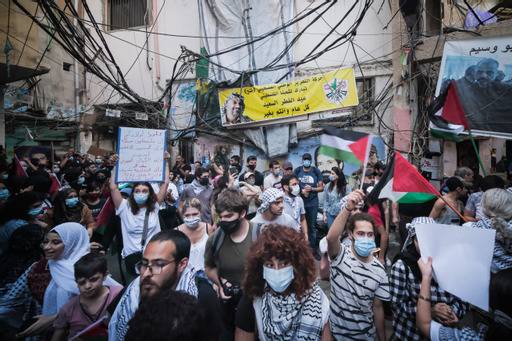 Many Palestinian refugees in Lebanon live in camps administered by the UN, where living conditions are substandard and poverty is high. (Credit: João Sousa/L’Orient Today)

Lebanon and Israel have been at a state of war since the Israelis invaded southern Lebanon during the Civil War, and the southern border is currently administered by the UN.

Ahmad said the international community must stop making “romanticized statements” about Israel’s occupation of Palestine. He called for pressure on the Israeli state to follow UN Resolution 194, which paved the pay for refugees to return to their land, and the Geneva Accord, which proposed a blueprint for a two-state solution and illegalized Israeli settlements such as those in East Jerusalem, including the occupation of Sheikh Jarrah.

This year, the leadup to the Nakba’s anniversary coincided with the final days of the Muslim holy month of Ramadan. Tensions stemming from the developments in Sheikh Jarrah reached a crescendo when Israeli security forces fired rubber bullets, stun grenades and tear gas at worshippers in Jerusalem’s Al-Aqsa Mosque compound, Islam’s third-holiest site, injuring hundreds of Palestinians.

The incident prompted the Islamist group that administers the Gaza Strip to launch rockets at Israel. Israel responded by launching air raids in Gaza, which have so far killed more than 40 people, including more than 10 women and children, and renewing international interest in the issue.

In Lebanon, Palestinian refugees, Palestinian-Lebanese residents and their supporters organized solidarity marches and protests in Beirut and several Palestinian camps around Lebanon, including Ain al-Hilweh in Saida, Nahr al-Bared in the north and camps in the Sur area.

During a solidarity march on Tuesday, some 200 protesters marched from Beirut’s Mar Elias Palestinian refugee camp to the nearby Shatila camp in a show of support for Sheikh Jarrah, shouting chants such as “Not east, not west — all of Quds is Arab” — using the Arabic name for Jerusalem — and “Palestine, we are with you until death.”

In the Raouche area on Monday, demonstrators carried signs reading “Save Sheikh Jarrah” and “We Will Meet in Quds Soon.”

With the world’s eyes on Jerusalem, other Palestinians and their supporters are taking a more grassroots approach to shedding light on Sheikh Jarrah.

For Samer Loubani, a Palestinian refugee living in Lebanon, showing support meant getting involved in a social media campaign begun by Sheikh Jarrah’s residents under the hashtag #SaveSheikhJarrah. 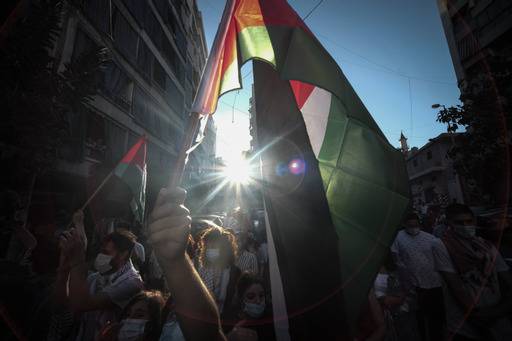 Loubani told L’Orient Today that channels such as Instagram and the new mobile application Clubhouse, which enables voice-only chat rooms, have enabled Palestinian supporters from Lebanon and the Middle East more broadly to help push the issue onto the world stage. This renewed energy has pushed some members of Loubani’s community to invite high-profile personalities to engage in conversation about the situation in occupied Jerusalem as well as Palestine more broadly.

“We used our network to invite influential people, such as the social media influencer Nicolas Khoury, Youssef Hussein” — a comedian who hosts the popular Arabic-language talk show Joe Show — “to talk about the assaults that took place in Palestine,” Loubani said.

“Ordinary people were also invited to join and either stand in solidarity with the Palestinians or engage in debates” with the influencers.

Manal Makkieh, a Palestinian activist and social worker, told L’Orient Today that although the normalization of Gulf countries’ relations with Israel made headlines this year and appears generally accepted across the Arab world, she “came to discover on social media and Clubhouse that many Arabs are joining talks on anti-occupation and anti-normalization.”

Many protesters have linked their online activism to fatigue with traditional media narratives surrounding the Israeli occupation.

“If an Israeli gets violated or kicked out of his or her home, a big human rights issue would emerge. But, when a Palestinian witnesses the same, the topic becomes taboo and no one reports about it,” said Zaynon Naboulsi, a Palestinian refugee in Beirut.

Speaking with L’Orient Today, Naboulsi contended that the Israeli occupation is not a conflict between two sides, as portrayed by mainstream outlets, but a matter of violent aggression by armed forces against Palestinians, who are acting in self-defense.

Citizen journalism, whether live streams of Israeli aggressions on the Al-Aqsa Mosque compound or first-hand accounts by members of the families under threat of expulsion, has played a prominent role in disseminating information about Sheikh Jarrah and solidarity movements, with criticisms of pro-Israel bias being levied at traditional media outlets.

But activities are finding that using social media to correct the familiar frenzy of reportage surrounding the Palestinian cause comes with a new set of challenges. Activists worldwide have claimed that social media channels, especially Instagram and Facebook, have censored pro-Palestine posts, including raw footage, interviews and interviews on the ground.

On May 6, amid claims of censorship, Instagram, which Facebook owns, tweeted that it was fixing technical issues that were “not related to any particular topic.”

Makkieh said Palestinians and their supporters were responding to the issue by giving the apps a low rating with the aim of affecting “their business and pressures them into giving all people equal space to express their opinions.”

“War does not happen on the ground alone; it also happens through ... social media,” she said. “These have been the means adopted by the Israeli occupation to gain support and alliances from the international community.”

BEIRUT — With Palestinians in East Jerusalem’s Sheikh Jarrah neighborhood facing displacement from their homes, young activists in Lebanon are finding new channels to showcase to a global audience what for Palestinians is an all too familiar scene.Earlier this year, a Jerusalem court upheld a decision that would expel eight Palestinian families — about 75 residents — from land that they...