Just what is Gebran Bassil’s game in the maritime border demarcation? 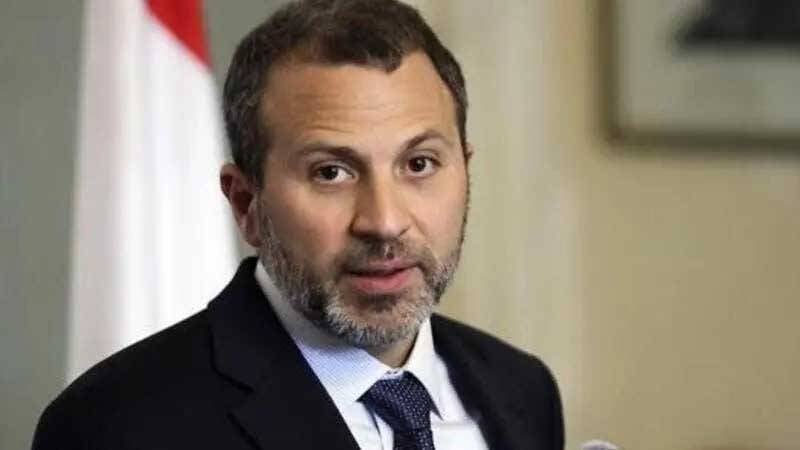 Free Patriotic Movement leader and former Minister Gebran Bassil proposed a compromise between Lebanon and Israel concerning claims made by both sides in the maritime border talks.

It was just a sentence in the middle of a long speech, in which he touched on all subjects, as is his habit. This sentence, however, was certainly the most significant one.

On Saturday, Bassil explained that the resumption of negotiations with Israel concerning the maritime border demarcation should be conditional, in particular, on the delimitation of an intermediate “new line” defined by international experts.

The Hof line, which was named after US Ambassador C. Hof, who in 2012 was leading the mediation between the two countries, gave Lebanon 55 percent of the disputed maritime zone and Israel 45 percent. However, this share was questioned by the Lebanese side, which estimates that Lebanon has the right to an extra 1,430 square kilometers outside the disputed area.

Bassil appeared to want to propose to the Jewish state a compromise between the limits of the disputed zone and Line 29, which demarcates the additional 1,430 square kilometers, representing the maximalist demands of Lebanon.

“This is the best proposal to protect Lebanon’s resources since it is based on the principle of equidistance between lines 23 [the southern maritime boundary of the disputed zone] and 29,” FPM MP and former Energy Minister Cesar Abi Khalil said.

“This solution would also allow Lebanon to protect its oil field in Block 9,” he added.

In fact, Lebanon has great expectations from this block. But since the block spills over into the disputed zone with Israel, Lebanese authorities have yet to launch drilling works.

The Christian leader’s proposal seeks to balance Lebanon’s legitimate claims and the need to reach an agreement with Israel in order to benefit from any gas resources in the area.

This proposal also has the advantage of reassuring the Israeli side, given that Line 29 covers a substantial part of Israel’s Karish field.

This proposal, however, sparked new controversy as Bassil’s detractors accuse him of seeking to use this issue for personal gain.

The FPM leader holds no official position to make decisions on such a strategic issue. In an article published on Monday in the Lebanese daily Nidaa al-Watan, Mohammad Obeid, a maritime border expert and analyst close to Hezbollah, accused Bassil, who was sanctioned by Washington in November 2020, of wanting to exploit the situation in a bid to get back into the United States’ good graces.

Obeid argued that Bassil saw a sign of hope in the fact that the US revoked its terrorist designation of Yemen’s Houthi movement.

“We know perfectly well how this [Bassil’s proposal] was orchestrated in secret to appeal to the Americans so they make a deal,” Ferzli said on Monday.

In Bassil’s defense, Abi Khalil said, “all those who are leveling criticism know nothing about how complex this issue is.”

In his article, Obeid drives the point home, saying that it was no surprise to see the FPM leader, who had declared “not to have any ideological differences with Israel,” considering such a solution, especially since he had clearly expressed his wish to see Lebanon and Israel agree to invest in “joint hydrocarbon explorations.”

Back in December 2017, Bassil said, “This is not an ideological cause for us. All we want is for all people to live in peace and accept each other,” in reference to the Jewish state — a statement that provoked controversy.

‘Bassil has strayed from the official stance’

The maritime border issue, which had already become a political issue par excellence, has been further politicized in recent weeks, while negotiations with Israel were put on hold in December.

After having campaigned to amend Decree 6433/2011 to recognize Lebanon’s sovereignty over the 1,430 square kilometers in addition to the disputed zone, President Michel Aoun refused to sign it.

Aoun says he believes such an amendment requires consensus within the political class, arguing that the decree could jeopardize negotiations with Israel. His critics do not agree. They accuse the president of trying to play this card in the talks with the US in a bid to push the Americans to reconsider their position vis-à-vis Bassil, his son-in-law.

For his part, Parliament Speaker Nabih Berri takes a very dim view of the Aounist offensive regarding this issue, once considered to be his private turf.

Hezbollah, on the other hand, has yet to comment on its Christian ally’s deviation from normal procedure, arguing that the border demarcation is not within Bassil’s remit.

"The border demarcation falls under the state’s responsibility, and whatever decision the state makes, we will accept it. Our task will then be to protect these borders once the delimitation has been completed,” said Mohammed Afif Naboulsi, the Shiite party’s spokesman.

Experts agree, however, that the negotiations with Israel would not have been possible without Hezbollah’s go-ahead.

“Gebran Bassil has strayed from the official stance,” said Gen. Mohammad Hoteit, who is close to Hezbollah, in reference to Bassil’s statements on Line 29, which was defined by military experts.

Bassil’s opponents see his suggestion as an attempt to brush aside the army, particularly its leader, Joseph Aoun, who could be a competitor in the next presidential elections.

According to a source close to Hezbollah, Bassil’s suggestion is, at this stage, nothing but a testing of the waters.

“Nothing will be done without national consensus,” affirmed the source. The Shiite party could be put off by yet another proposal that Bassil made on Saturday. The FPM leader suggested the formation of a “delegation,” chaired by a representative of the head of state, which would be responsible for negotiating with Israel and resuming talks with Cyprus and Syria, “based on unified criteria,” to redefine the borders of Lebanon’s exclusive economic zone.

This delegation would also include representatives of the prime minister, the army and the ministries of foreign affairs, public works and energy.

“We will only allow indirect negotiations under the United Nations’ sponsorship to take place. Any negotiation of a political nature will be refused from the very beginning as this would suggest disguised normalization with the Zionist entity,” Naboulsi argues.

On the eve of the launch of negotiations with the Jewish state at the end of October 2020, Aoun’s office was pushing for a civilian representative to be on the Lebanese delegation. Hezbollah vetoed the proposal and demanded that only military figures represent the Lebanese side.

Free Patriotic Movement leader and former Minister Gebran Bassil proposed a compromise between Lebanon and Israel concerning claims made by both sides in the maritime border talks.It was just a sentence in the middle of a long speech, in which he touched on all subjects, as is his habit. This sentence, however, was certainly the most significant one.On Saturday, Bassil explained that the...