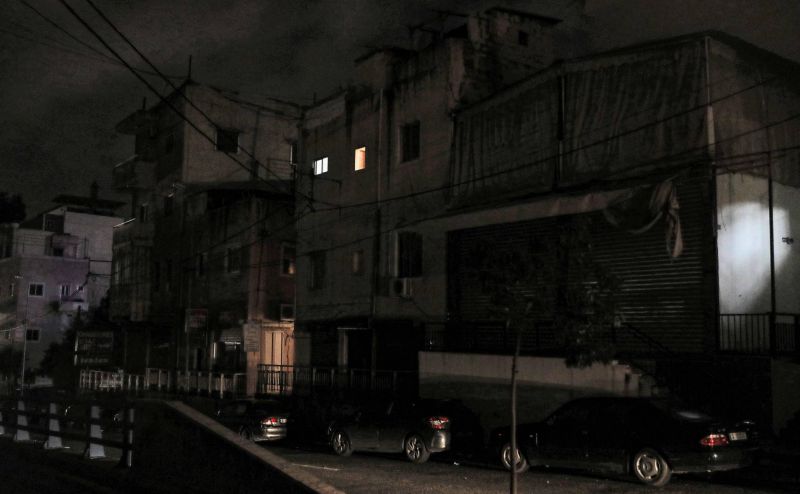 A neighborhood is seen during a power outage in the Lebanese capital of Beirut on March 31, 2021. (Credit: Anwar Amro/AFP)

BEIRUT: Beirut's roads are riddled with potholes, many walls are covered in anti-government graffiti and countless street lamps have long since gone dark.

At night, car drivers creep cautiously past broken traffic lights and strain their eyes for missing manhole covers, stolen for the value of their metal.

Many parking meters have been disabled in protest against an alleged corruption scandal, while cars are parked randomly on sidewalks.

Charred patches from burned tires are seared into the asphalt downtown, reminders of angry street protests of past years against the political leadership held responsible for the malaise.

To many, the dysfunctional capital has become emblematic of a country mired in its worst crisis since the 1975–90 civil war, after decades of mismanagement and corruption.

Amid the crisis, the Lebanese currency has collapsed and continues its downward slide at a sickening rate that in itself is deepening the problem.

As the currency has dived by more than 85 percent on the black market, wary contractors are steering clear of any municipal repairs that are paid for in Lebanese pounds.

When the Beirut city council called for tenders to fix lighting on streets and in tunnels, no one showed up at two meetings to assign bids last month.

"Not a single contractor wants to work with the municipality," a Beirut city council official told AFP, speaking on condition of anonymity.

But if the city raised its offers, the official added, "there would be nothing left in the coffers."

The few contractors taken on in recent months, the municipality official said, have been hired to repair buildings ravaged in the enormous portside explosion.

The buildings were divided into 15 groups depending on the degree of damage, but the city found only firms willing to work in the four worst-hit categories.

Just months after signing on, the companies are complaining because the pound has lost even more of its value on the informal exchange market.

Meanwhile, many civil society and non-government organizations have stepped in to help with the badly needed repairs.

On other projects, companies contracted by the city are unhappy too — among them the waste management firm Ramco, which signed on to be paid the equivalent of $14 million per year, according to Beirut Mayor Jamal Itani.

The sum is now worth less than $2 million.

"From time to time, [Ramco] threatens to suspend work until the fees are adjusted," the anonymous official said.

Many worry that this could lead to a repeat of Beirut's 2015 infamous trash crisis, when a landfill closure led to festering rubbish piling up in the streets.

Tenders for Beirut road and pavement maintenance cannot find bidders either, to the frustration of professional drivers.

"The potholes in central Beirut alone are a pain," said Ahmad, a 32-year-old minibus driver. "Every time I drive over them, the bus gets more worn down."

The head of the engineers' syndicate, Jad Thabet, said private companies were not interested in any contracts with state institutions in Lebanese pounds.

"People don't want to sign up to make a loss," he said.

The municipality official said Beirut had only LL800 billion left in its coffers.

Of that, about LL300 billion is spent each year on salaries and other running costs.

Yet revenues have plummeted, including from the municipality's main source of income: building permits.

"The construction sector has ground to a halt," the official said.

"Only four building permits were issued in the whole of 2020," compared with dozens annually before that, the official added.

"If it stays like this, the municipality is definitely headed for bankruptcy, just like the country is."

Critics charge that the municipality has been bogged down by mismanagement and corruption for years.

"The municipality has been inefficient since before the crisis," said Thabet, the syndicate chief, who added that even projects with foreign funding were never implemented.

One person familiar with the municipality said that it often tailors terms in the call for tenders to specific contractors chosen in advance to take on a project.

The city was suspected of corruption in 2019 after a row erupted over a deal under which parking meter revenues would fund the maintenance of traffic lights.

Amid speculation on whether the revenues were indeed being put to their intended use, protesters stopped people from using them.

Since then, the meters have ceased working, and traffic light upkeep has been halted until further notice.

Beirut's mayor, dismissing accusations of graft and inefficiency, said many plans had not been implemented due to "exhausting bureaucracy" and the rapid currency depreciation.

"We haven't been able to complete projects already underway," he said.

None of this is doing much to lift the public's spirits.

Inside her deserted handbag shop in the Hamra neighborhood, Elissar Bou Dargham said her city was turning into a decrepit and "sad" place.

"Everybody is responsible," said the 49-year-old vendor. "The people, the municipality, ministers and Parliament."

BEIRUT: Beirut's roads are riddled with potholes, many walls are covered in anti-government graffiti and countless street lamps have long since gone dark.At night, car drivers creep cautiously past broken traffic lights and strain their eyes for missing manhole covers, stolen for the value of their metal.Many parking meters have been disabled in protest against an alleged corruption scandal,...