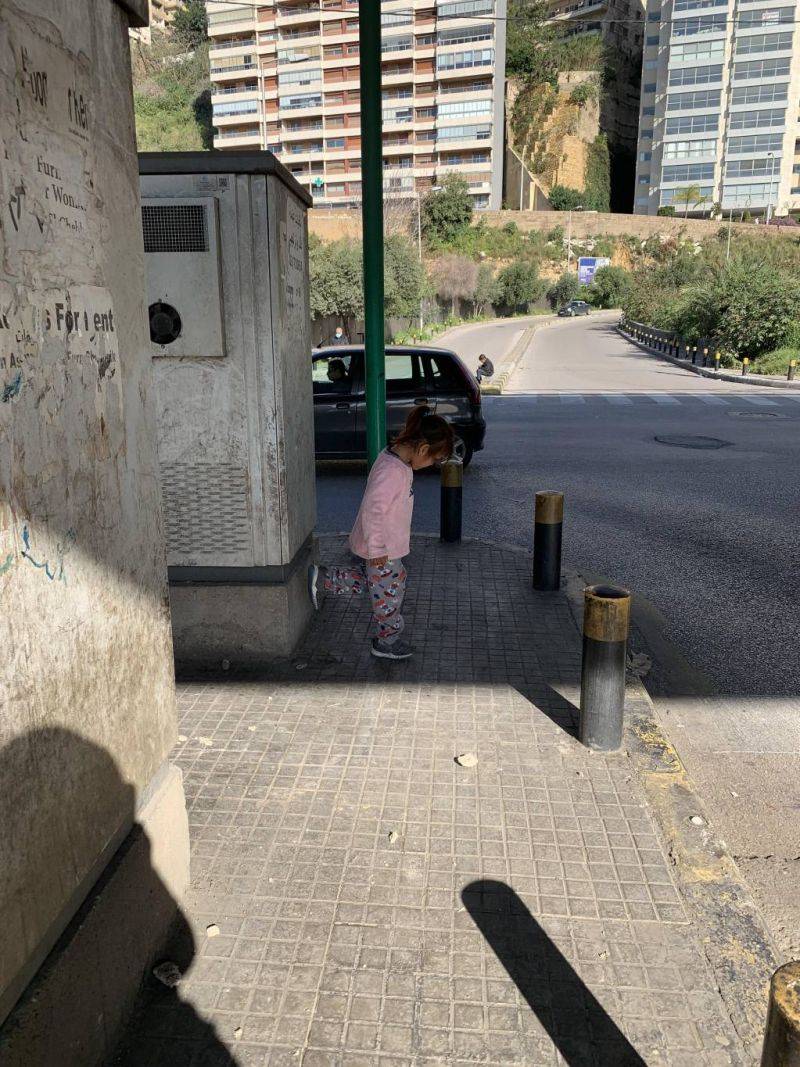 Under the busy Jisr al-Wati bridge in the heart of the Greater Beirut area, a community of beggars and homeless people exists in striking contrast to the area around them — a lively district where businesses selling high-end products abound. Every day, rushing cars drive past these people, many of whom have been dwelling on the sidewalk under the bridge for many months now.

Whether it’s windy, rainy or sunny, the homeless are always early risers. The daylight and the hustle and bustle of the street keep them from sleeping in.

As the day begins, a man, known amongst those who live under the bridge as the coffee maker, and who is a little well-off in comparison to the street dwellers, arrives in his old car to offer coffee to the people of this small world where kindness, misery and generosity live side by side.

At 7 a.m. every day, a taxi pulls over under the bridge to drop off a woman and her three children, who live in Ouzai, an area in Beirut’s southern suburbs, but come to the bridge daily to beg. The family of four will stay a good seven hours in Jisr al-Wati, leaving at 2 p.m.

The woman, a Syrian, spends her day begging on the street. Her husband, a construction worker, has been disabled since fracturing his spine in a work accident two years ago.

In an oversized, grimy pink sweater, her daughter Nour, a dirty-faced five-year-old with dark hair, looks much younger than her age.

Nour spends most of the time playing imaginary hopscotch with a real stone on the sidewalk under the bridge. Almost every morning, a woman driving a four-by-four pulls in to deliver her breakfast. Today, it is a giant manouche that Nour grabs with her tiny hands. Whenever she is snuggled up in her mother’s arms, Nour begins to sing happily.

A little further down the sidewalk, there’s Mouin Moghrabi, known as Abu Khaled, who has been on the streets for 15 months now, since his house was demolished following a court order.

The man with big blue eyes was born in March 1943 and thus prides himself on being a little older than Lebanon’s independence, which was achieved in November of that year.

Abu Khaled is the intellectual of the street. He lives among his books, some furniture and a radio. He presents himself as an architect who completed his university studies in Cairo, where he lost his accent from the village of Kfar Shuba in South Lebanon.

He enjoys talking politics and setting the world to rights, especially whenever he receives people who are almost in the same dire situation as him.

During the day, Abu Khaled grabs a book from the makeshift bookcase he has put up, sits in his plastic chair under the sun and immerses himself in reading, “dreaming of another life where the world would be perfect.”

Four walls and a door

Youssef Bitar, known as Abu Ali, is a 59-year-old man from the town of Ali al-Nahri in the Bekaa Valley. He occupies the other end of the sidewalk.

In winter, the bespectacled man with a long, thick grey beard wraps himself in six or seven blankets to keep warm and shield himself from the cold wind. “I will take the summer heat and humidity over the cold wintertime any day,” Abu Ali says.

He works in the nearby Souk al-Ahad market, or the Sunday public market, where he sells second-hand goods. But with the successive lockdowns as a result of the COVID-19 pandemic, Abu Ali barely makes ends meet.

“The first time I found myself on the street, it was very difficult. I went five nights without sleep. Then, I got used to [the situation],” says Abu Ali, who has been living on the street intermittently for more than eight years.

“Sometimes, I share my meals with other people who are even hungrier than me,” he adds, referring to the daily hot dishes distributed to the homeless in Jisr al-Wati by an association called Chabeb el Achrafieh (the young people of Ashrafieh). He also receives meals prepared by the Lazarists, a religious organization, and distributed three times per week.

Abu Ali, who charges his phone battery every day at a gas station opposite the bridge, can go for hours talking about anything and everything. He just needs to be in a good mood.

He admits that he longs to take a bath, put on some clean clothes and have a small room to live in, even a dilapidated one.

“I just want [four] walls and a door that I could close when I leave or when I go to sleep. This changes everything,” he says.

But in a country that sinks deeper into deprivation every day, normality might become an unattainable dream.

Under the busy Jisr al-Wati bridge in the heart of the Greater Beirut area, a community of beggars and homeless people exists in striking contrast to the area around them — a lively district where businesses selling high-end products abound. Every day, rushing cars drive past these people, many of whom have been dwelling on the sidewalk under the bridge for many months now.Whether it’s...