The Beirut port silos are at risk of partial collapse, a new report finds

An expert engineer charged studying the silos tells L’Orient-Le Jour in an exclusive interview that part of the grain silos, which became emblematic of the Aug. 4 Beirut port blast, is in danger of collapsing and must be demolished 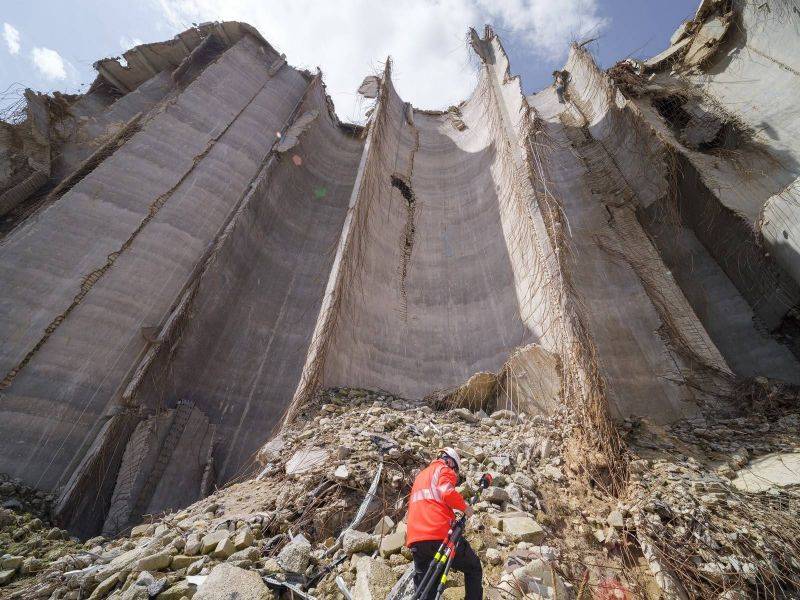 In a report recently provided to Lebanese authorities and reviewed by L’Orient-Le Jour, engineer Emmanuel Durand cautions that a section of the Beirut port grain silos at risk of collapsing must be demolished.

The structure once stored all the grains that supplied the country, until it was severely damaged by the Aug. 4 Beirut blast, which claimed the lives of more than 200 people and ravaged much of the Lebanese capital.

Durand submitted his findings on April 4 to the Beirut Port Silos group — a crisis unit made up of engineers, environmental professionals, academics and experts that was created at the direction of caretaker Economy Minister Raoul Nehme.

Based on his latest measurements, the silos’ northern bloc was heavily damaged and is in danger of collapse.

Durand, who is French, is a silo construction specialist based in Geneva. His consulting company, Amann Engineering, delivers expertise to industrialists around the world.

He came to Beirut in August, just after the explosion. “It was like a call,” Durand tells L’Orient-Le Jour.

He initially came as a volunteer, helping and training a group of students from St. Joseph University to scan and measure buildings in the capital in a bid to save the city’s architectural heritage.

To that end, Durand has a device that captures data with precision: a three-dimensional laser scanner that measures distances and temperatures, monitors movement, and takes 3-D and infrared images.

The device also makes it possible to display images of structures’ interiors without needing to enter them to take pictures, which protects workers from possible dangers. 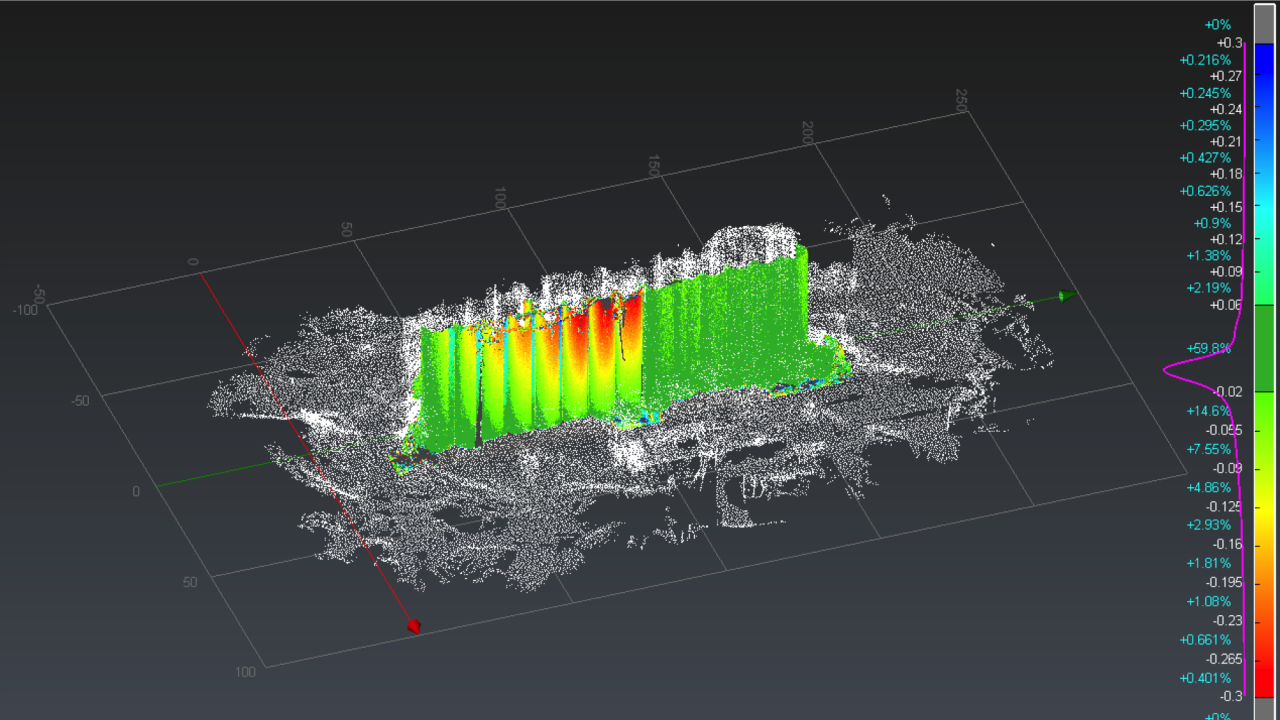 An image from the report on the port silos shows how much the northern section is leaning in shades of red.

When Durand completed his mission with the Lebanese students, the authorities proposed that he use his skills to help the Beirut Port Silos group.

“In September, I did the first laser scan in order to determine the geometric condition of the silo, and the results showed a tilt in the direction of the explosion,” Durand says.

It appeared impossible to him that the silos, which were constructed by a Czech company that had won a tender in the late 1970s, could have been designed at an incline.

The northern section must be taken down

Despite its appearance, the structure is not monolithic. The Beirut silos are made up of two completely independent blocs, consisting of 48 cylinders that were each 48 meters high and had a total capacity of 120,000 tons of grain.

Their southern part is located near the city, while the northern section, which suffered the most damage, is adjacent to the sea. Durand noticed the tilt in the northern bloc, something that set him thinking.

He returned to Lebanon for a second mission at the end of November, two months after his first findings. This time, the results showed no movement in the silos.

The structure was stable, but the thermal measurements of its inside warned of an imminent risk of fire. The grains had fermented from exposure to rainwater.

“The temperature was increasing. My last measurement showed 70 degrees. One hundred degrees [would cause the grain] to catch fire. Ten thousand tons [of grain] catching fire — can you imagine?” Durand says.

According to the engineer’s calculations, the fire could have started during the period from Christmas to New Year’s.

It was thanks to these thermal measurements, followed by the transfer of large quantities of grain to other areas, that the tragedy was averted. 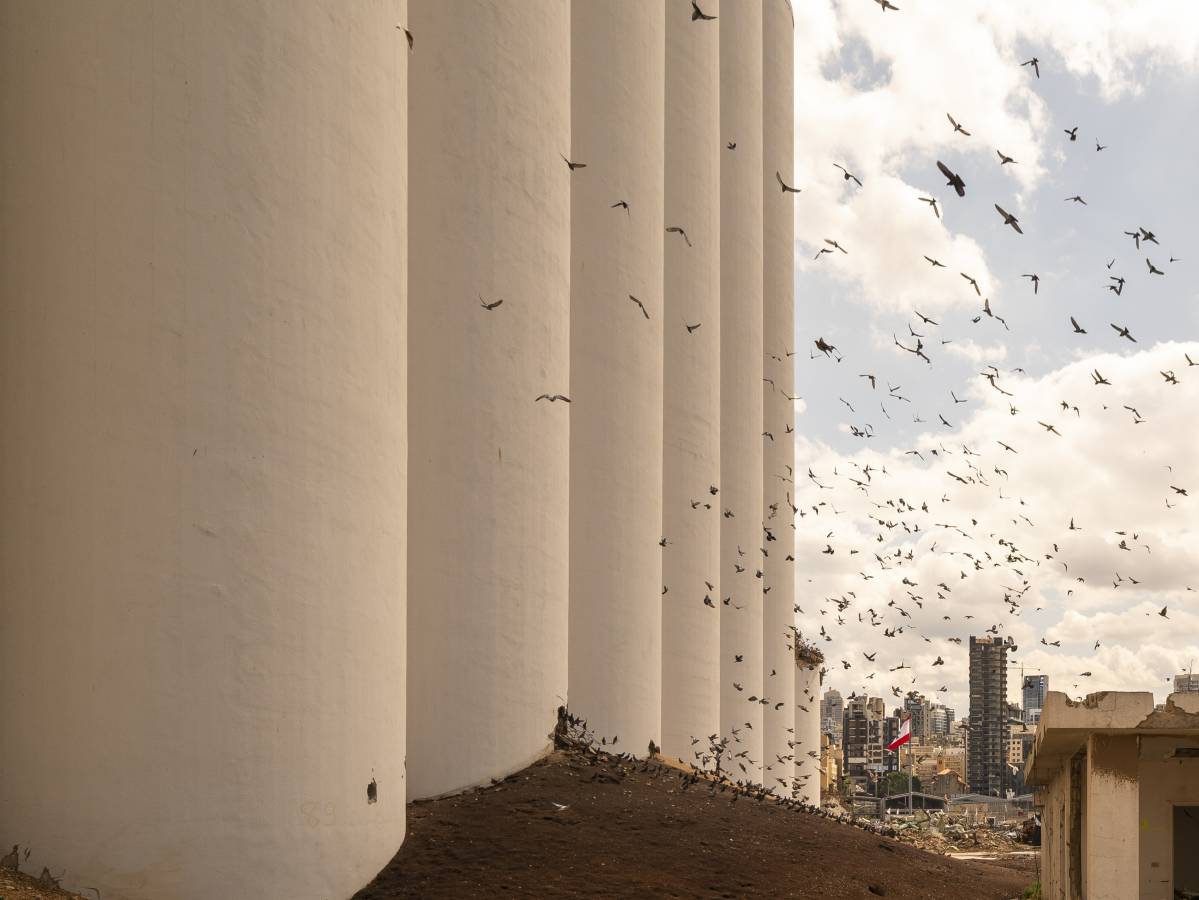 At the end of March, Durand was once again back in Beirut. And again, the measurements were not reassuring. While the southern bloc had still not moved, the upper part of the northern bloc had tilted by 25 centimeters.

“That’s a lot for a silo. The tolerated margin is normally 10 centimeters maximum. This means it is tipping over,” he notes.

But it was not just the top of the structure that was distorted. Durand also reports that the building’s base was no longer aligned. Laser scan measurements confirmed doubts he already had in September that the stakes in the ground supporting the building were damaged.

The silos are placed on pencil-like stakes, 16 meters high. This base did not withstand the explosion either.

“I had already alerted the group that the structure could not have escaped the impact of the blast. Look at the crater that the explosion made — it’s only 20 meters from the silos. The stakes must have been smashed,” Durand explains.

The tipping of the bloc is indeed worrying, and the rainy season only made it worse.

Durand’s latest measurements showed that the northern bloc had leaned 250 millimeters in 120 days. In other words, the tilt is progressing at a rate of 2 millimeters per day.

“By comparison, the Tower of Pisa in Italy was leaning about 5 millimeters per year until it was stabilized. The cylinders here tilt at 2 millimeters per day. Can you imagine?” he says.

In the report to the working group, Durand recommended the deconstruction of the structure’s northern section because its collapse seems inevitable.

“It is not something that I wish, but it’s like you have a healthy leg and another that gangrened. Unfortunately, it must be cut off,” he says.

What will happen to the historic silos that cushioned the western part of Beirut and saved lives by absorbing a significant part of the energy released by the explosion? The debate has only just begun.

In a report recently provided to Lebanese authorities and reviewed by L’Orient-Le Jour, engineer Emmanuel Durand cautions that a section of the Beirut port grain silos at risk of collapsing must be demolished.The structure once stored all the grains that supplied the country, until it was severely damaged by the Aug. 4 Beirut blast, which claimed the lives of more than 200 people and...