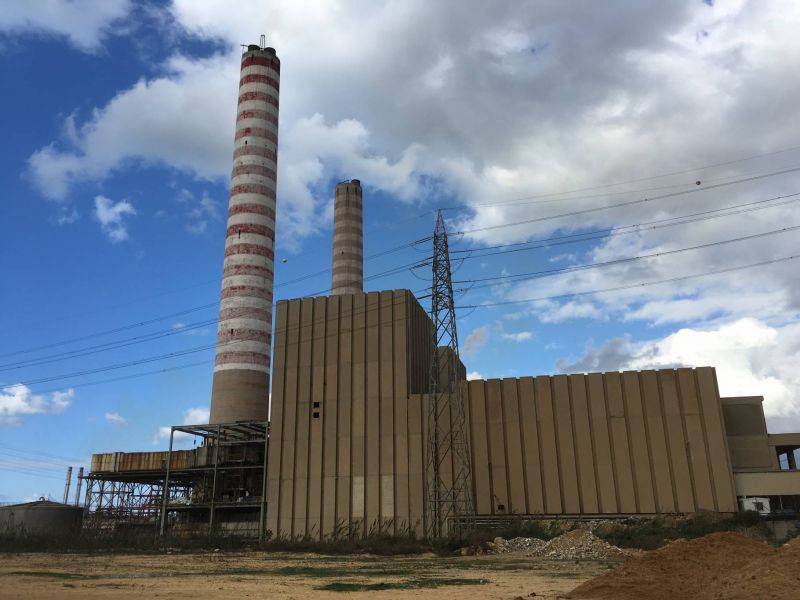 Two of Lebanon’s four major power plants have shut down in the past week, threatening to plunge some regions into up to 22 hours of darkness per day. (Credit: Philippe Hage Boutros/OLJ)

BEIRUT — Lebanese residents should gear up for the possibility of even longer electricity blackouts heading into the Easter weekend lockdown after a major power plant in northern Deir Ammar ran out of gas oil on Thursday, forcing it to shut down.

The Deir Ammar plant is the second major facility to go offline in the past week. A facility in southern Zahrani shut down at the beginning of the week after also exhausting its stock of gas oil.

Together, the Deir Ammar and Zahrani facilities produce almost 900 megawatts of electricity when operating at full capacity — about 40 percent of the country’s total output, according to information provided to L’Orient Today by a source from Lebanon’s public utility, Électricité du Liban.

Even before the plants went offline, Lebanon was producing only about 1,000 MW of a possible 2,200 MW of electricity, the source said.

“We’re now producing around 500 MW, so I expect severe outages,” the source added.

Residents should expect only two to eight hours of state electricity per day, depending on their region, the source said.

The shutdowns have occurred after a tanker carrying 60,000 tons of gas oil was first prevented from off-loading in Zahrani on Monday.

The shipment was unable to meet new testing standards required by Siemens, the plants’ German manufacturer, for purchases bought off the so-called spot market, according to Marc Ayoub, an energy researcher at the American University of Beirut’s Issam Fares Institutes.

Lebanon has increasingly resorted to these on-the-spot purchases after its contract with Algerian fuel provider Sonatrach ended in 2020 following a “tainted fuel” scandal. However, oil bought off the spot market is costly and requires payment upfront in foreign currency.

Having been unable to complete its delivery in Zahrani, the tanker could not continue up the coast to supply Deir Ammar.

According to Ayoub, the oil deliveries are on hold because Siemens is requiring a new testing technique that Bureau Veritas, the company that tests the specifications of spot market fuel purchased by Lebanon, says cannot be done in the Dubai labs where the shipments are usually tested.

“The issue with the specification still hasn’t been resolved between Bureau Veritas and Siemens,” the EDL source said.

Bureau Veritas was unable to provide immediate comment about the status of the oil shipment. Siemens did not respond to a request for comment.

A Kuwaiti oil tanker that is bound for Lebanon to supply the Zahrani and Deir Ammar plants with nearly 43,000 tons of fuel is currently making its way through the Suez Canal after getting stuck in the weeklong blockage that ended on Monday.

“We’ve been told that the tanker is supposed to arrive tomorrow and begin off-loading,” the EDL source said.

But even if the ship makes its way through the traffic backed up in the canal to Lebanon by tomorrow, it must then successfully test its fuel.

Ayoub said the ship is unlikely to run into the same testing snags as the shipment stopped in Zahrani.

“These [testing] measures are only implementable on spot cargo shipments,” as opposed to national distributors, he said.

But even with different testing requirements, delays are inevitable. “Testing and off-loading a tanker takes around three days,” said Roudi Baroudi, an oil and gas expert.

Sources from EDL were unable to comment on when the Kuwait tanker is likely to off-load.

The successful delivery of the Kuwaiti tanker’s oil, though likely to ease blackouts, will only punt the perennial issue of Lebanon’s electricity crisis, which is worsening as months go by.

For decades, EDL has been running a large deficit due to faulty infrastructure, high production costs and insufficient revenue streams. EDL’s chronic deficits account for almost half of Lebanon’s public debt, with the company providing a severely inconsistent electricity supply.

Even after the Deir Ammar and Zahrani power plants go back online, Primesouth, the company overseeing their operations and maintenance, has sounded the alarm over its inability to operate unless it receives outstanding payments.

Its contract with the state to operate and maintain the power plants ended in February, and it has yet to be renewed, even though the company has not ceased operations.

On Thursday, employees at the Deir Ammar went on strike, demanding that Primesouth secure a new deal with EDL, while calling for a hike in wages to offset the plummeting purchasing power of their current salaries amid Lebanon’s economic crisis.

“No agreement has been reached with EDL to renew the contract,” the company’s CEO, Khalid Alalamy, told the workers.

The company is owed $45 million in outstanding payments for the year 2020, he said.

“Maintaining this plant with imported spare parts has become really difficult given the currency crisis,” the EDL source said, adding that workers are pushing for a new deal to avoid losing their jobs.

Lebanon is in the midst of its worst economic crisis in decades. Unemployment has soared, and the lira has lost some 85 percent of its value amid a dollar crisis in Lebanon, where imports account for the vast majority of goods.

However, Lebanon has had no government for seven months, after caretaker Prime Minister Hassan Diab’s cabinet resigned in the wake of the Aug. 4 explosion that decimated large swaths of the capital of Beirut.

Lacking a government to devise a long-term plan to address the electricity crisis, MPs this week approved the framework of a deal for Iraq to export fuel to Lebanon in exchange for medical services and equipment.

However, experts have warned that the oil found in Iraq is unsuitable for Lebanon’s power plants.

Iraq’s oil is high in sulfur and without refinement does not comply with international standards to run power plants, Yahya Mawloud, the chief operating officer of Middle East Power, previously told L’Orient Today.

In other words, given that Lebanon lacks oil refineries, petroleum products would have to be shipped to another country for refinement and then transported to Lebanon.

“There are no refineries in Lebanon to refine crude oil. … Iraqi fuel oil is not for Lebanon, and it is better to sell it to refineries … not for power plants,” Noam Raydan, a Baghdad-based analyst focusing on energy and geopolitics in the Middle East and North Africa, wrote on Twitter Thursday.

BEIRUT — Lebanese residents should gear up for the possibility of even longer electricity blackouts heading into the Easter weekend lockdown after a major power plant in northern Deir Ammar ran out of gas oil on Thursday, forcing it to shut down.The Deir Ammar plant is the second major facility to go offline in the past week. A facility in southern Zahrani shut down at the beginning of the...