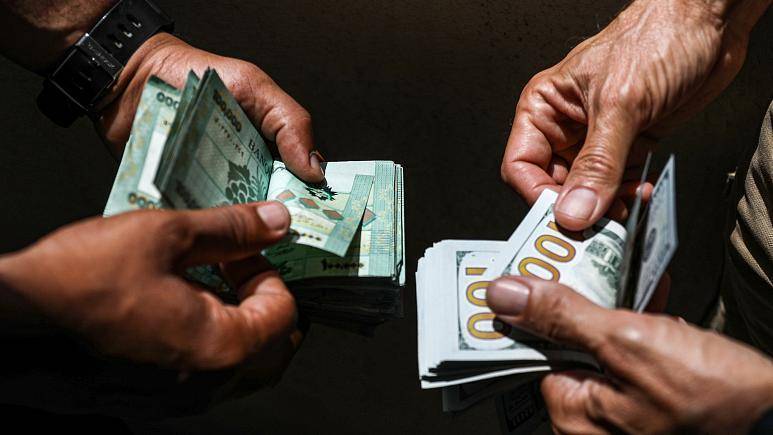 The Lebanese lira has hit its lowest exchange rate to the dollar since July. (Credit: AFP)

BEIRUT — The Lebanese lira’s value had held stable on the parallel market for nearly a month, until it plunged Thursday to as low as LL9,550 to the dollar, its lowest level since last summer.

For the first time since July 6, the exchange rate at shops selling dollars breached the LL9,000 mark on Wednesday, after trading just shy of this level in recent weeks amid the COVID-19 lockdown. Its slide has continued, dropping approximately 7 percent from opening prices on Wednesday to Friday.

The steep depreciation comes after the central bank’s apparent decision to end its dollar injection into the market on Jan. 15, following the start of the countrywide COVID-19 total lockdown the day before.

Without any explanation, Banque du Liban stopped injecting cash dollars in mid-January and has not resumed their market intervention since, according to Mahmoud Morad, the head of the Syndicate of Money Changers.

Aiming to stabilize the lira against the dollar, the central bank started injecting dollar banknotes into the market in June last year. This mechanism, announced by Parliament Speaker Nabih Berri in Baabda, aimed to push the lira value towards LL3,200 to the dollar — a target that was never reached.

About 34 money changers bought dollars from the central bank, at a rate of LL3,880. Each exchanger was receiving up to $600,000 daily in June. This amount progressively decreased to $10,000 per day before stopping in January.

This resulted in about $150 million being injected into the market, a Class-A exchanger who requested anonymity told L’Orient Today.

As BDL’s reserves dwindle toward a critical threshold, the central bank has been unable to maintain its scheme to protect the pound’s market value against high foreign currency demand.

“The demand for dollars never stops, the hard currency is needed to import foodstuffs, equipment, consumables and other necessities,” said Mahmoud Halawi, a major exchanger and former head of the Syndicate of Money Changers.

The Syndicate of Money Changers assigned Class-A exchangers in June to “secure citizens’ needs for dollars” by supplying dollars to foodstuff and medical supplies importers, employers of foreign domestic workers and families of students living abroad. BDL last provided dollars to cover these requests on Jan. 15.

The gradual easing of the countrywide total lockdown, starting from Feb. 8, also led to upward pressure on the exchange rate. As the lockdown eased and some in-store shopping resumed, consumption increased. In order to restock their products, retailers turn to exchange shops to convert their lira into dollars. This raises the pressure on dollar supplies, which manifests through the lira value.

At the same time, President Michel Aoun and Prime Minister-designate Saad Hariri have failed to break a monthslong political stalemate over the formation of a new government, creating political uncertainty.

“Political instability pushes people to stop selling their foreign currencies, while holders of lira rush to buy dollar banknotes,” Halawi said. Such uncertainty shrinks the quantity of foreign currency available in the market.

Once the dollar price starts increasing, holders of the greenback suspend exchanging, while buyers rush to secure the hard currency, pushing down the lira value further and quicker.

There are no available statistics on total hard currency supply and demand in Lebanon, and without a trading platform where exchangers register their operations, it is impossible to estimate the real lira value.

Sayrafa House, a BDL platform available for licensed exchangers, has been fixing the exchange rate at LL3,900 since June. Legal money changers have been caught between an artificial fixed rate and a predominant fluctuating rate in the country.

Licensed exchangers have to buy their US dollars at a rate below LL3,900. This means they are losing market share to “illegal exchangers” that purchase the greenback at more than twice the legal price.

Halawi attributes the failure of BDL’s efforts to organize the market to the lack of a “decision to allow exchangers to price the lira according to the law of supply and demand.”

Now, “only God knows” who sets the fluctuating market rate, Halawi said. “Even security forces have been unable to figure this out.”

With dollar deposits in Lebanese banks withdrawable at a rate of LL3,900 on amounts up to $5,000 per month and at the official peg of LL1,500 to the dollar thereafter, bank clients continue receiving haircuts on their deposits while withdrawing a deteriorating currency.

The political elite and bankers have thus far avoided recognizing losses during bailout negotiations with the International Monetary Fund and show little to no signs that they will do so in the near term, even as the national currency is brought to its knees.

Under a scenario that assumes the continuation of political paralysis and no external financing — leading to the depletion of foreign currency reserves — the lira would collapse toward about LL29,500 to the dollar in 2024, estimates Garbis Iradian, a chief economist for MENA at the Institute of International Finance.

BEIRUT — The Lebanese lira’s value had held stable on the parallel market for nearly a month, until it plunged Thursday to as low as LL9,550 to the dollar, its lowest level since last summer.For the first time since July 6, the exchange rate at shops selling dollars breached the LL9,000 mark on Wednesday, after trading just shy of this level in recent weeks amid the COVID-19 lockdown. Its...