‘It feels like the beginning of the end’: COVID-19 vaccination campaign gets into full swing, but there’s a long road ahead 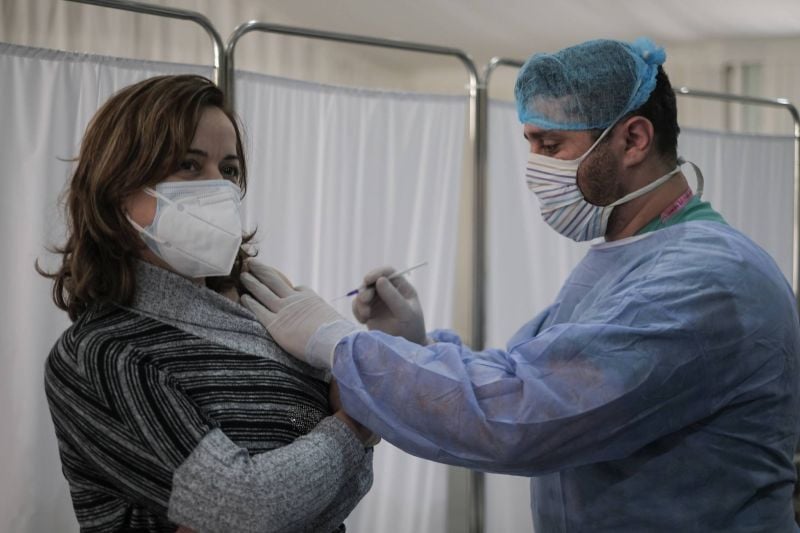 BEIRUT — The national COVID-19 vaccination campaign got into full swing on Monday as hospitals began their first full week of inoculations with the Pfizer-BioNTech vaccine.

At 9 a.m., a small crowd of health care workers from St. George Hospital in Beirut, more commonly known as Mustashfa Roum, gathered outside a large tent opposite the hospital’s main entrance, eagerly awaiting their turn to be called inside.

“Oh my goodness, I can’t wait,” endocrinologist Carla Sawan told L’Orient Today as she checked in for her vaccination. “Today I feel like science has made it.”

After initial registration, each recipient moved on to one of four small desks, where they answered a series of questions about any medical conditions they have and their history of allergic reactions.

Along the length of the tent, originally set up to treat patients after the hospital was partially destroyed in the Aug. 4 Beirut port explosion, nurses dressed head to toe in bright blue personal protective equipment stood to attention outside eight booths, waiting to welcome the next person to be vaccinated.

Final year medical student Georges Rahbani began unbuttoning his shirt even before he sat down. “I’m very excited — it feels like the beginning of the end.”

Almost one year since the first case of COVID-19 was registered in Lebanon, hospitals are still struggling under the pressure of the pandemic, with 87 percent of all intensive care beds occupied, according to the World Health Organization. On Monday, the Health Ministry registered 1,739 new cases of COVID-19 and 44 more people died from coronavirus-related illness.

Every few minutes at Roum’s vaccination center, a nurse would call out for more vaccine doses. Moments later, Wael Abi Ghanem, the hospital’s chief pharmacist, would arrive with a small red cooler, containing eight tiny vials of the vaccine, each storing six doses.

Roum does not have one of the specialized freezers needed to store the vaccine at the required minus-70 degrees Celsius, so doses are transported regularly from Rafik Hariri University Hospital, which has three such freezers.

“This process is extremely critical, as the vaccines are only stable for five days outside the freezer,” Abi Ghanem explained.

Having received the vaccine, each person waits in an observation area for 15 to 30 minutes, depending on their medical history.

“So far, the vast majority of people aren’t experiencing any reaction to the vaccine,” said Sara Haddad, an infection control officer at the hospital who was discharging people after their observation time period elapsed.

Across town at Rafik Hariri University Hospital, the country’s main coronavirus center, the mood was just as ecstatic and the outdoor observation area was filled with happy chatter as those who had received the vaccine waited to be dismissed.

“It was simple, straightforward,” said 23-year-old nurse Nathalie, beaming as she headed out of the vaccine center accompanied by her mother.

Like at Mustashfa Roum, RHUH has eight individual booths for administering vaccines. Rather than a tent, management there designated an auxiliary building at the back of the large hospital grounds for the vaccination center.

Behind a long glass window, three health workers sat preparing syringes and doses of the vaccine, ready to be handed to nurses on request.

Standing beside them was a small team from the International Federation of Red Cross and Red Crescent Societies that was touring RHUH’s vaccination center to monitor the registration system, workflow and handling of the vaccines.

On Friday, the World Bank and the IFRC issued a joint statement saying they would closely monitor the vaccination campaign, after reports emerged that political leaders were demanding priority access to vaccines for them and their entourages. Ferid Belhaj, the World Bank’s vice president for the Middle East and North Africa, published a series of tweets with the hashtag #nowasta, referring to the Arabic word for “connections” or “nepotism.”

The vast majority of those attending the centers Monday were health care workers, either from the hospitals themselves or from hospitals in other areas that have not yet opened a vaccination center. At RHUH, chief medical officer Rabih Chahine estimated that around 20 percent of staff have received their first dose so far.

However, some members of the population most vulnerable to the coronavirus, those over 75 years of age with health conditions, were invited to attend a vaccination appointment.

Seventy-eight-year-old Othman was one of the small number of non-hospital staff booked in to receive a vaccine at RHUH Monday morning.

“It didn’t hurt at all, it all went very smoothly,” he said, beaming as he sat in the post-vaccination waiting area. “Everyone has to go to their closest hospital as soon as they can and get vaccinated — no question,” he added.

The pace of vaccinations was lightning fast. Visitors were generally in and out of the booth within a minute: a quick check of medical history, hand sanitization, a wipe-down of the arm, needle in, syringe down, needle out, band-aid and done.

However, despite the jubilation surrounding the launch of the vaccination campaign, there is still a long way to go.

According to the Impact platform, only just over 500,000 people have registered so far to receive the vaccine — less than 10 percent of the population. In a survey by think tank Siren Associates, slightly more than half of those asked in Lebanon said they wanted to take the vaccine, while another survey conducted by Information International found only a third wished to be inoculated.

Dozens of health care workers shared photographs of themselves getting vaccinated over the last two days to encourage those who have not yet registered to do so.

“We need to all go for the vaccine and encourage others to register,” said Colette Hanna, an oncologist at St. Joseph Hospital in Metn, moments after she received her first dose. “COVID-19 is a very lethal disease and we have to protect ourselves and others as quickly as possible.”

Even if significantly more people do register for the vaccine, the doses currently on order to arrive in Lebanon by the end of the year total 6.3 million, only enough to cover around half of all residents.

BEIRUT — The national COVID-19 vaccination campaign got into full swing on Monday as hospitals began their first full week of inoculations with the Pfizer-BioNTech vaccine.At 9 a.m., a small crowd of health care workers from St. George Hospital in Beirut, more commonly known as Mustashfa Roum, gathered outside a large tent opposite the hospital’s main entrance, eagerly awaiting their turn to...