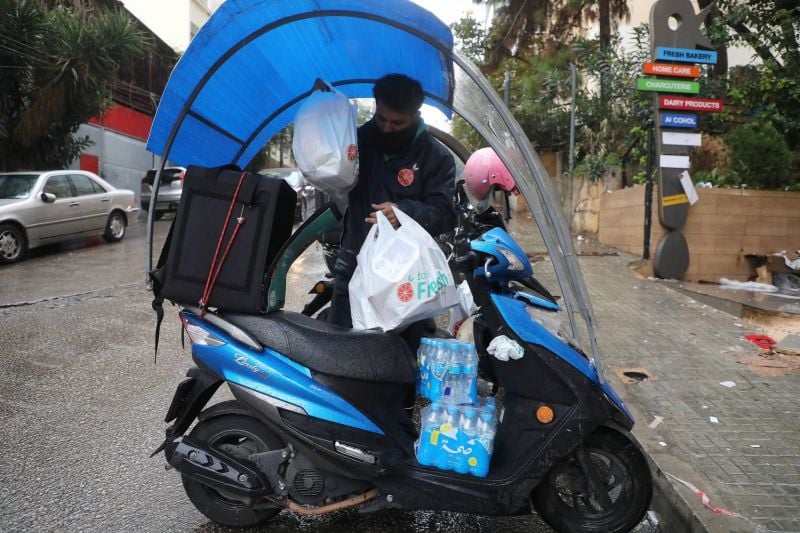 A driver for the Toters delivery company loads goods onto his scooter. (Credit: Mohamed Azakir/Reuters)

BEIRUT — Lebanon’s stir-crazy residents began to push the limits of coronavirus lockdown measures over the second weekend of a nationwide 24-hour lockdown, despite a continued surge in coronavirus cases in the country.

After a week of consistent rain and low winter temperatures, sunny weather over the weekend lured some residents out into the streets, despite strict instructions to stay at home to slow the alarming spread of the virus.

While restaurants, bars and cafes remained shut to dine-in customers, streets in Beirut that had gone quiet over the last 10 days witnessed an apparent increase in footfall Sunday.

The country has been under strict lockdown since Jan. 14, including a round-the-clock curfew and delivery-only shopping from grocery stores and restaurants. Officially, residents must request permission to leave the house for acceptable “emergencies,” which include going to the pharmacy, doctor’s office or bakery, among other errands.

An Internal Security Forces spokesperson told L’Orient Today that most people on the street had permits to be out and about. “We are checking on the ground whether the permits are legitimate, and most of them are. … We’re reaching 100,000 permit approvals in a day,” he said.

However, minimarkets and grocery shops across the city were seen selling food directly to customers, abandoning the delivery-only rule. In Beirut’s Basta and Khandaq al-Ghamiq neighborhoods, residents gathered outside shops and bought food from open stores. While vehicular traffic remained relatively low in Beirut’s Hamra and Achrafieh neighborhoods, many people were seen taking leisurely walks, gathering on neighborhood stairs and lining up outside of bakeries.

Officials also seem to be having a hard time sticking to lockdown regulations. A video posted by Al-Jadeed showed caretaker Culture and Agriculture Minister Abbas Mortada attending a crowded funeral service in Akkar on Sunday. Twitter users responded to the video by calling on security forces to take action immediately.

The health situation remained dire Sunday, with hospitals across the country at or near capacity, and COVID-19 patients overflowing into ERs. An all-time high of 913 coronavirus patients were in ICUs, according to the Health Ministry, and 50 more people died from the virus, raising the death toll to 2,340.

Meanwhile, the country registered 3,010 new cases, bringing the number of confirmed infections since the beginning of the year to 98,145 — an enormous surge that has overwhelmed hospitals.

“People think they outsmarted the system by getting a permit [to leave the house], while in fact they go and get the virus and come to me begging for an [ICU] bed, and I don’t have any,” said Georges Juvelekian, the head of the ICU at Beirut’s St. George Hospital, commonly known as Mustashfa Roum.

“There was actual traffic [Saturday] on the way to Faraya, with people who are supposed to be in lockdown going to the mountains,” the exasperated doctor said. “People shouldn’t even get a ticket at this point — they should be thrown in jail, they should be arrested.”

Security forces and municipalities, under the leadership of the Interior Ministry, have been criticized by health policy experts for their haphazard approach to implementing lockdown measures in the past.

In an interview with L’Orient Today prior to the lockdown, caretaker Interior Minister Mohamed Fehmi said that “the Lebanese government needs to provide citizens or businesses with aid at the very least” in order for his ministry to adequately implement lockdown measures.

Many residents have argued that adhering to lockdown measures would be impossible without government aid, especially for Lebanon’s most vulnerable, many of whom depend on work outside the home to cover their living expenses during the economic crisis.

Small protests were held across the country Saturday in Tripoli and Saida against deteriorating living conditions, which have been exacerbated by COVID-19 lockdown measures. Protesters pledged to intensify their demonstrations if the lockdown continues. It is currently set to last until Feb. 8.

“Mutations can be bad news. The more the virus is allowed to spread and replicate, the more likely new, more virulent or contagious mutations will arise,” Abiad warned in a series of tweets Saturday, adding that this may lead to strains that are “less identifiable by the body’s immune system, thus rendering vaccines less effective.”

The chair of Parliament’s health committee, MP Assem Araji (Future/Zahle), said a Health Ministry platform will be launched Monday to allow people to register to receive vaccines, which are set to start arriving the first week of February. Following registration, the platform will direct people to a vaccination center. Inoculations are set to take place at 35 centers around the country, Araji said.

BEIRUT — Lebanon’s stir-crazy residents began to push the limits of coronavirus lockdown measures over the second weekend of a nationwide 24-hour lockdown, despite a continued surge in coronavirus cases in the country.After a week of consistent rain and low winter temperatures, sunny weather over the weekend lured some residents out into the streets, despite strict instructions to stay at...