Where did Lebanon’s Christmas trees come from?

The Christmas tree has come to symbolize all things associated with the year-end holiday. But how did a tradition believed to have started in Western Germany reach Lebanon? 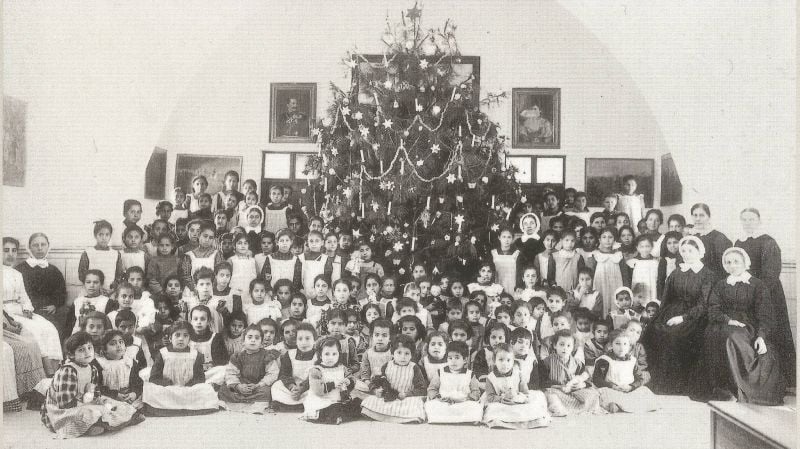 BEIRUT — The Christmas tree is believed to have originated in Western Germany in the 16th century. Germans used to adorn their homes with a “Paradise tree,” usually a fir tree, from which they hung wafers, then cookies and candles.

The practice stemmed in part from a popular medieval play about Adam and Eve, in which the fir represented the Garden of Eden. In the same room, families would build a Christmas Pyramid—a wooden structure with shelves that supported figurines, evergreens, candles and a star. By the 16th century, the pyramid and the tree merged, becoming the Christmas tree.

German Lutherans first embraced the custom, making it widespread in their community by the 18th century. It then spread in England and other parts of the Christian world in the 19th century. This is when it reached Lebanon.

The role of German deaconesses in Lebanon

Before World War I, the Germans had a sizable presence in Beirut.

In the wake of the 1860 civil war, European missionaries felt an urgent need to assist the refugees who had fled Mount Lebanon to the city.

The Lutheran Order of Saint John, known as Johanniter, set up two posts in Beirut after the events of 1860. One was the Prussian hospital in what is today Ecole Superieure Des Affaires (ESA). The second was an orphanage/ boarding school in what is today downtown Beirut, near the souks. The Kaiserswerth Deaconessate, as it was called, was run exclusively by women, known as deaconesses.

Julia Hauser, a professor at the University of Kassel in Germany and author of German Religious Women in Late Ottoman Beirut, told L'Orient Today that “these German deaconesses celebrated Christmas from the very beginning when they came to Beirut.”

During their first Beirut Christmas, they threw a party. “They invited people from other consulates, other ambassadors and consular staff, and also the governor of Beirut,” explains Hauser.

She says that it was through these festivities that they introduced traditions like exchanging gifts, caroling and raising a tree. Hauser reckons that the first tree to be decorated must have been a cedar, because of its pointed needles.

“In Lebanon, you would have had cedars,” she suggests. “So I guess they used cedars, as they definitely would have used a proper tree.”

Students took part in the festivities. “The German deaconesses actually didn't speak Arabic,” she says, “or didn't learn it very well, and so were dependent on these children learning German.”

After that first Christmas, the celebrations gradually became more private, in tune with how Christmas is celebrated in Germany.

Hauser explains that “in Germany, Christmas is a bit different from Christmas in the US or in the UK. It's totally a family event. That means the nuclear family, and it is quite intimate.” 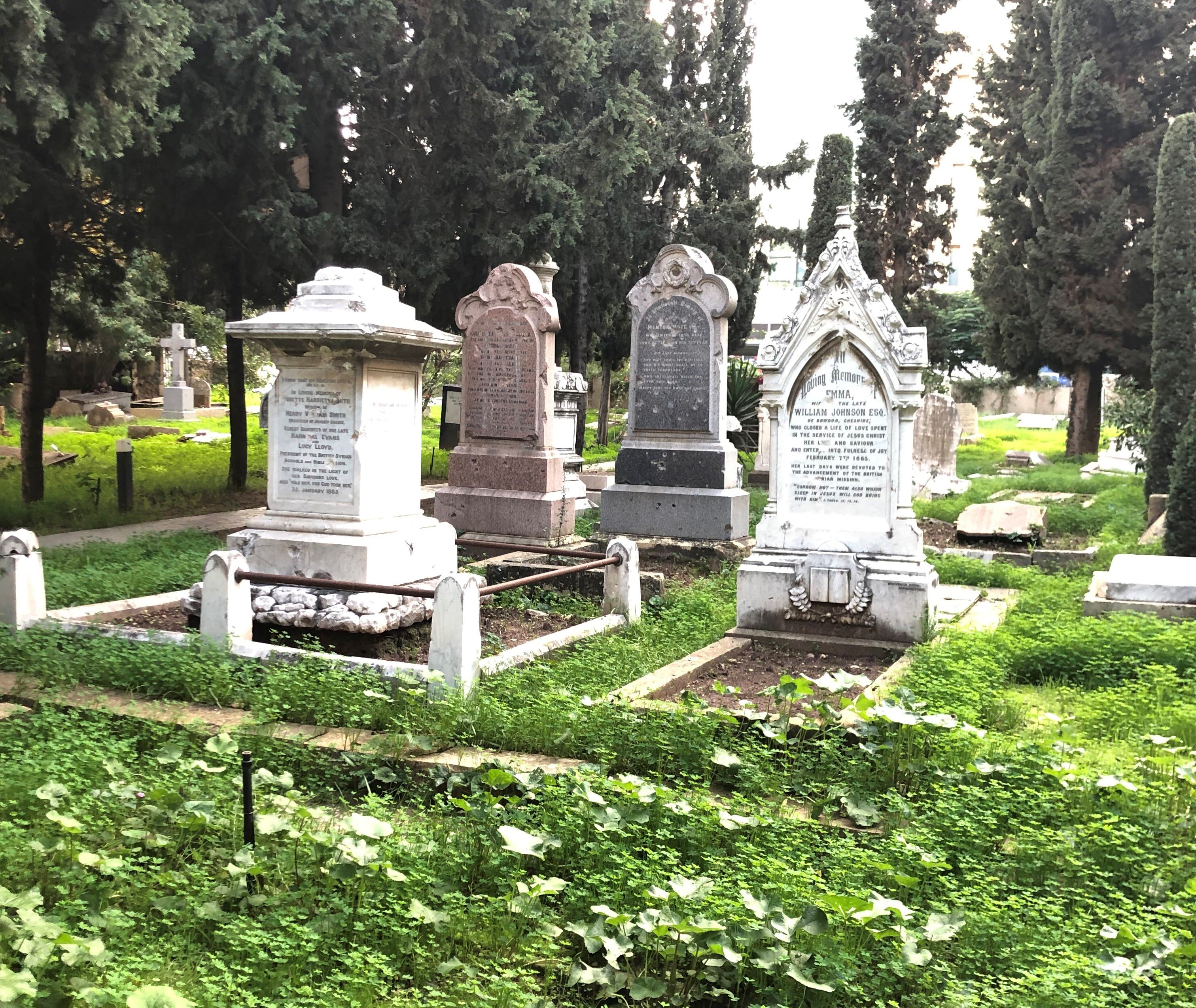 Many of the German Deaconesses are buried in Beirut in the Protestant graveyard, next to the Jewish cemetery in Sodeco.

In the years that followed, the number of invitees skimmed down to just the deaconesses and their pupils, and Christmas carols were sung exclusively in German.

Even the children's parents were no longer invited. Hauser believes that this had less to do with Christmas and more to do with “certain racism that these deaconesses had. Their agenda, basically, was to separate these children from their families and show them what they considered a better family life. So yeah, in that regard, racism really played a role in these events.”

The Germans were sure to celebrate Christmas by the Western calendar, meaning on Dec. 25th.

The orphanage was a girls-only affair, as was the adjacent tuition-based boarding school that the Lutheran deaconess ran. Many of the elite at the time feel their daughters there.

This included high-Ottoman officials such as Mehmid Kamil Pasha, the Governor of Beirut who later became the Grand Vizier of the Ottoman Empire; European and American expats, such as the children of Daniel Bliss; some influential Beirutis, such as Hasan Bayhum, a member of the municipal council and co-founder of the Makasid Foundation, also sent their daughters for Lutheran education.

Hauser says that the Kaiserwerth stoked the ire of some parents, including Kamil Pasha. “He became very anti-missionary later on,” Hauser says, “and I think that is because they tried to proselytize, sort of convert, his daughters.”

After Germany's defeat in World War I, France evicted the deaconesses in 1920 and took possession of their assets in Lebanon. This was facilitated under Article 297 of the 1919 Treaty of Versailles, which legalized confiscation of “enemy” religious property as long as it was turned over to a similar faith.

Before hosting ESA in 1996 , The Prussian hospital had first been retooled as an army base, then the French Embassy. The school/orphanage, located in the area known as Starco, was temporarily used as a jail for sex workers before the French Protestant Federation reopened it in 1927 as a school, named College Protestant.

Many Beirutis would still call it madrasa broussa , or Prussian college. The building that once housed the German deaconesses was demolished in 1956 to make way for the Starco center, and College Protestant moved to its current location in Koraytem. 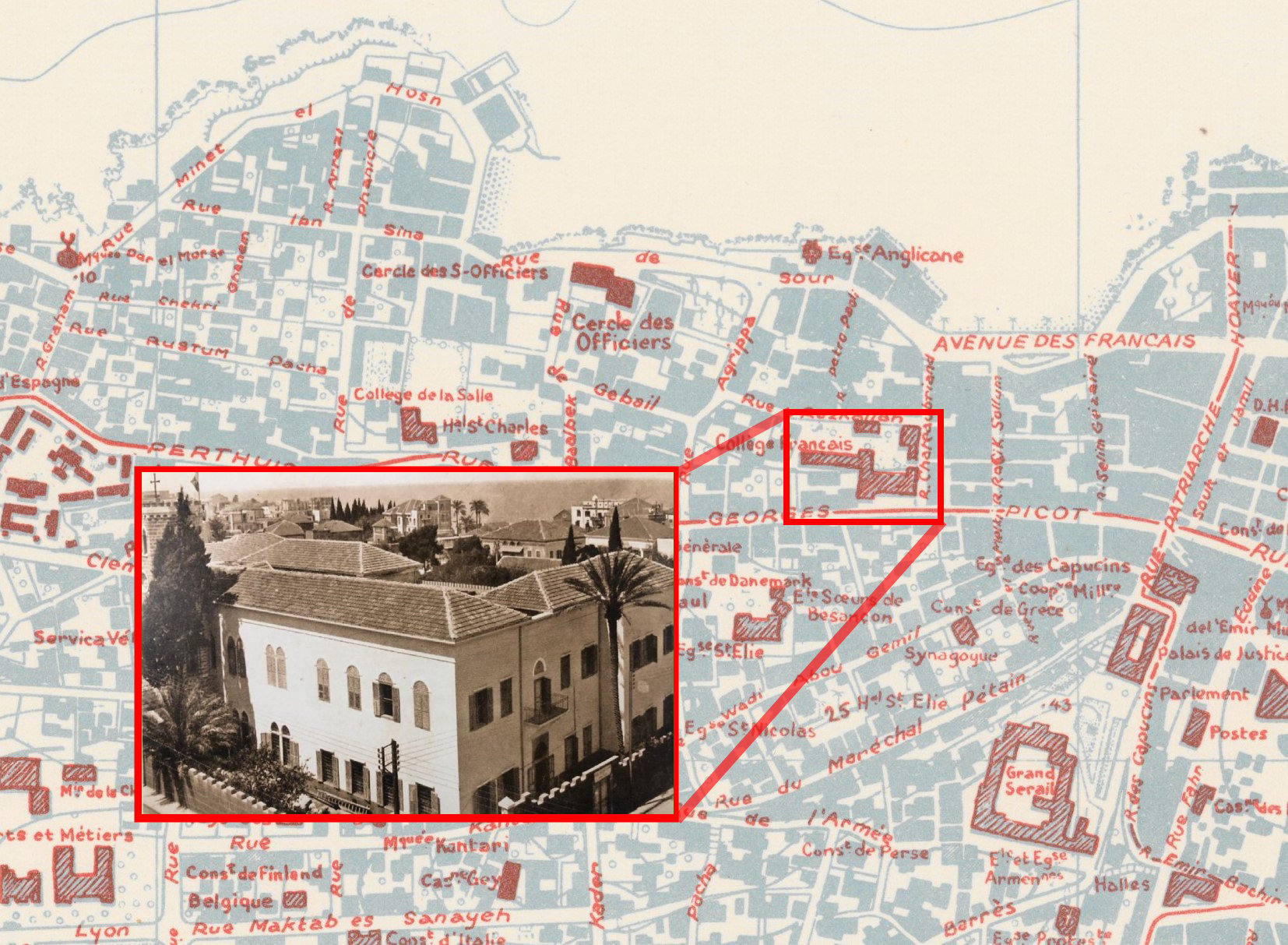 Map of Beirut in 1941 showing College Protestant side by side with photo from that era. The building once housed the German deaconesses until 1920. Today it is the site of the Starco Building

Despite their short-term presence, the German deaconesses played an influential role in how Christmas is celebrated in Lebanon. While digging through the mission's archives, Hauser found their letters home about how many of their students wanted Christmas trees in their own family homes. This also included Sunni students, like the Bayhoun kids.

“They said to their parents,” Hauser says, “you know, can we please have a Christmas tree?”

The deaconesses would sometimes mistake this for an eagerness to convert but, as Hauser adds, “They didn't. All they wanted was a Christmas tree.”

Many of the Germans' Lebanese alumni went on to open schools of their own in Beirut and elsewhere. Nastas Jirjis Haddad, one of the early students, later opened a school in Bhamdoun. The schools were modeled after the German one they attended.

“And then, of course, at these schools, they would also introduce Christmas trees,” says Hauser. “So I think their influence wasn't just small.”

Hauser does not rule out the help of other missions in Beirut introducing the Christmas tree in Lebanon, especially the Jesuits. “There were all these Catholic missions, which were, in many ways, far more influential than the German mission,” she says. “So I think we have to see them as part of a, let's say, a Christmas tree coalition.”

Archives from the beginning of the 20th century show the extent of the Christmas tree traditions: As early as 1926 Maison Gargour supplied decorated Christmas trees to homes; Christmas balls were hosted in hotels or in private residences by elites such as the High Commissioner in Syria and Lebanon, Henri Ponsot.

L'Orient described the event at the time in such terms: “Needless to add that the traditional tree is of beautiful proportions and that Santa Claus' toys, chosen by Mrs. Ponsot delighted her little guests.” 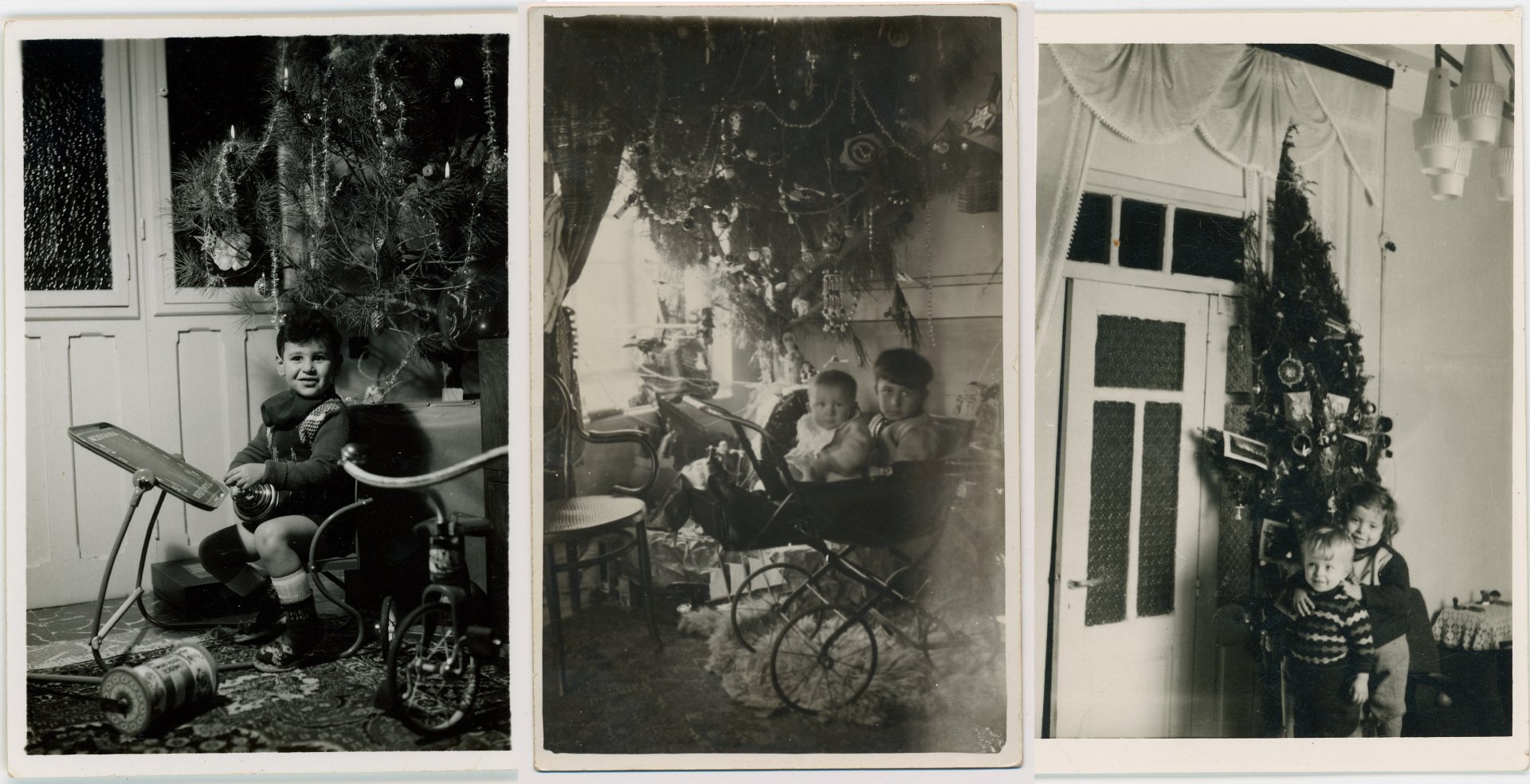 The souks of Beirut would also be decorated with firs. The Orient described the 1945 Christmas market in glowing terms. “For this first Christmas in times of Peace, Beirut merchants have deployed treasures of ingenuity. Multi-Colored papers, tale and cotton-faux snow, polychrome lamps, fir trees, Santa Clauses, shooting stars, all the archaic attire was brought out.”

It seems that these traditions endured the passage of time. A stroll in the current Christmas markets around Beirut might be described in similar terms, although plastic trees have replaced real ones.

BEIRUT — The Christmas tree is believed to have originated in Western Germany in the 16th century. Germans used to adorn their homes with a “Paradise tree,” usually a fir tree, from which they hung wafers, then cookies and candles.The practice stemmed in part from a popular medieval play about Adam and Eve, in which the fir represented the Garden of Eden. In the same room, families would...