Tens of thousands of football fans from around the world have arrived in Qatar since the World Cup launched Sunday. For many of them, the global event has become a platform for intersecting political views. 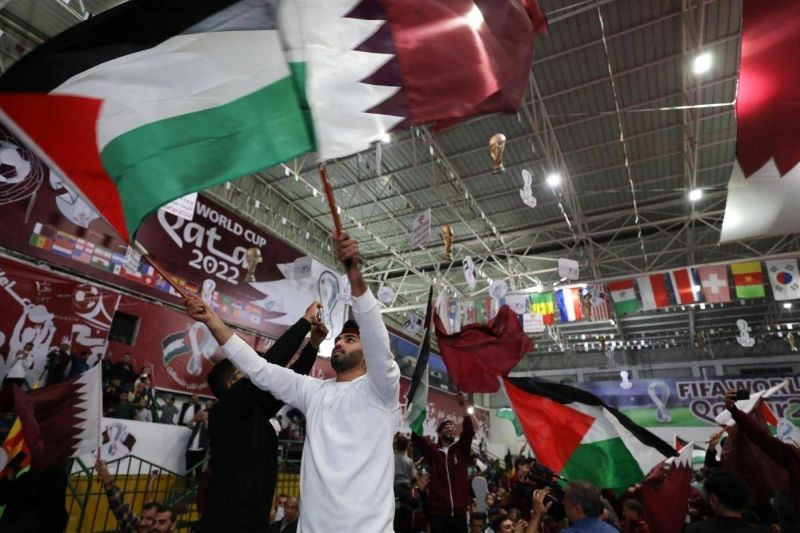 Fans wave the Qatari and Palestinian flags in Gaza City on Nov. 20, the day of the World Cup opening ceremony (Credit: Reuters)

BEIRUT — Since the FIFA 2022 World Cup kicked off in Doha, Qatar on Sunday, Arab voices across the region have been using the global event to make their opinions heard on the issues that matter to them.

Making use of the tournament is “a normal step to take for anyone who has a political and humanitarian message that they wish to portray to a certain audience,” Jad Shahrour, a communications officer for the civil society group Samir Kassir Foundation, told L’Orient Today. “Especially events such as the World Cup that have a big visibility,” he said.

“We saw how last year celebrities raised banners calling for justice to the victims of massacres in Syria and Palestine on the red carpet at the Oscars,” Shahrour noted.

As the matches continue, the World Cup has become a space for conflicts, solidarity and nationalism in the region and the world to show up through sport.

Arab football fans at the first World Cup in the Middle East have been shunning Israeli journalists in Qatar trying to interview them, illustrating that the “normalization” deals signed by four Arab countries with Israel don’t necessarily convey the sentiments of their citizens, and protesting against the human rights violations Israel commits.

Someone make a thread of people's reaction to Israeli journalists in Doha... pic.twitter.com/YoxVWbQkrg

Qatar and Israel have no diplomatic relations.

The Israeli public broadcaster Kan has also been allowed to set up a temporary studio in Doha to provide Israeli viewers with coverage of the matches.

The coverage hasn’t gone smoothly. After Tuesday’s shocking victory against a strong Argentinian line up that included superstars Lionel Messi, Angel Di Maria, and Luataro Martinez in their opening match, refused to speak with a reporter from the Israeli Channel 12 news station in Qatar.

During a match between Tunisia and Denmark, the Tunisian and Arab fans cheered for the liberation of Palestine, cheering “Palestine Palestine will be free!” and “Jerusalem will always remain an Arab capital!”

“Qatar, Palestine, together hand in hand”: Palestinian spectators and their supporters chanted in Doha to show support for World Cup, one day before the tournament kickstarted.

Doha supports Hamas, the Palestinian Islamist group that controls the Gaza Strip and has fought four wars with Israel since 2008.

Israeli officials had expressed their hope that the US-brokered normalization agreements with the United Arab Emirates and Bahrain, in 2020, and later with Sudan and Morocco, would lead to further normalization, including with Saudi Arabia.

Qatar was under world scrutiny in the days leading to the World Cup, and the BBC did not air the opening.

Speaking at a press conference just hours before the World Cup kicked off Sunday, FIFA President Gianni Infantino accused Western countries of “hypocrisy,” saying they were not in a position to give “moral lessons” to other nations.

“I’m European. For what we Europeans have been doing around the world in the last 3,000 years, we should be apologizing for the next 3,000 years before starting to give moral lessons to people,” Infantino told hundreds of reporters in a press conference in Qatar.

Qatar, which was awarded the right to host the global football tournament in 2010, has faced harsh criticism for its treatment of migrant workers and human rights record.

“How many of these European or Western business companies, who earned millions and millions from Qatar and other countries in the region — billions every year — how many of them addressed the rights of migrant workers with the authorities?” Infantino said.

“I have the answer for you. None of them,” the FIFA chief said, adding “the one-sided moral lesson is just hypocrisy.”

LGBTQ+ people in Qatar face legal action but the country has said all fans are welcome to attend the showpiece event.

Still, people wearing t-shirts and holding up signs to support the LGBTQ+ community have been refused entry into stadiums.

Critics also questioned Qatar, the first country in the Arab world to host the competition, for banning the sale of alcohol inside stadiums during the tournament.

Some argued that the West should understand that its values are not universal.

“Every decision that is taken in this World Cup, it is a joint decision between Qatar and FIFA. Every decision is discussed, debated and taken jointly. There will be, I don’t know how many, fan zones – eight, 10, big fan zones, over 200 places where you can buy alcohol,” Infantino said.

He also pointed out this was not unusual as drinking inside football stadiums is banned in European nations such as France, Spain, Portugal and Scotland.

Germany players posed with their hands covering their mouths on Wednesday as they lined up for the team's photo prior to the World Cup game against Japan.

The team’s social media feed said that the gesture was designed as a protest to FIFA’s decision to effectively ban the pro-LGBTQ+ “OneLove” armband that many European captains had been hoping to wear in Qatar.

Shahrour argues that “the opposing view might say that Germany’s team should respect the host country [Qatar] while others would argue that their protest was against FIFA’s administration who changes its rules based on the host country.”

Shahrour concluded by stating that “probably the red carpet events where celebrities raised political and humanitarian events were against that too, but the point remains the same: a group had a certain message to send.”

Karl Sharro, a Lebanese-Iraqi satirical commenter on Twitter, summed it up:

I noticed that this World Cup has allowed many people to release their repressed emotions. It's a Qatarsis

BEIRUT — Since the FIFA 2022 World Cup kicked off in Doha, Qatar on Sunday, Arab voices across the region have been using the global event to make their opinions heard on the issues that matter to them. Making use of the tournament is “a normal step to take for anyone who has a political and humanitarian message that they wish to portray to a certain audience,” Jad Shahrour, a...