Israel has blamed the incident, described as a “provocation,” on Iran, its enemy in the region, amid tensions and stalled nuclear deal talks. 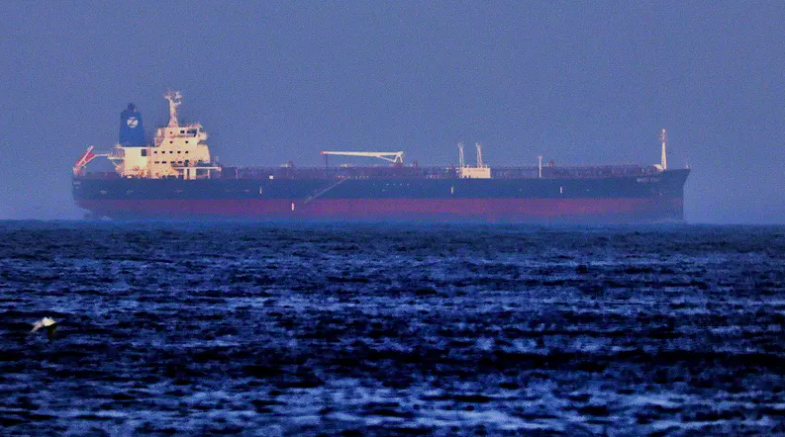 A photo taken on August 3, 2021 shows the oil tanker MT Mercer Street, run by an Israeli company, off the port in the Gulf emirate of Fujairah, United Arab Emirates. On July 29, two crew members were killed in what appears to be a drone attack off the coast of Oman, with Israel blaming Iran. (Credit: AFP File photo)

Israel has blamed the incident, described as a “provocation,” on Iran, its enemy in the region, amid tensions and stalled nuclear deal talks.

Around 3:30 pm on Tuesday, tanker Pacific Zircon was hit by a projectile off the coast of Oman, said Eastern Pacific Shipping, the owner of the ship.

According to Samir Madani, co-founder of TankerTrackers.com, which focuses on maritime shipments, the ship was carrying 42,000 metric tons of diesel bound for Buenos Aires.

The incident did not cause any casualties or any fuel to leak into the sea, but there was minor damage to the vessel's hull, the Singapore-based owner company told AFP.

The shipping company is owned by Israeli billionaire Idan Ofer. According to a 2019 investigation on the Israeli TV show Uvda, the businessman paid a spy company in 2014 to “legally” track down information on the Israeli Ministry of Finance, managed at the time by Yair Lapid, in order to influence tax policies to his advantage.

The tanker, located about 240 kilometers off the coast of Oman, was subject to an attack carried out with “the same drones that the Iranians are selling to the Russians for use in Ukraine,” an Israeli official told AFP. “This is an Iranian provocation,” he added, claiming the incident was intended to “disrupt the environment” before the FIFA World Cup that begins Sunday in Qatar, but does not amount to an “Iranian victory” against Israel.

The Bahrain-based US Navy's Fifth Fleet said in a statement it was “aware of the incident.” The British military's United Kingdom Maritime Trade Operations told the Associated Press that the incident was “being investigated at this time.”

The United States on Wednesday condemned the Nov. 15 attack against an oil tanker off the coast of Oman, which it attributed to Iran, said National Security Advisor Jake Sullivan in a statement. “Upon review of the available information, we are confident that Iran likely conducted this attack using a UAV, a lethal capability it is increasingly employing directly and via its proxies throughout the Middle East and proliferating to Russia for use in Ukraine.”

Tehran has not yet reacted to the suspicions that weigh on its responsibility.

This attack comes amid tension between Iran and Israel, two regional enemies which have been waging a shadow war for years amid the development of Iran's nuclear program.

In this tug-of-war, several drone attacks blamed on Iran have already targeted Israeli-associated vessels operating in the region. The most recent was on July 29, 2021, against a tanker flying the Japanese flag and managed by a company headed by an Israeli businessman.

The attack resulted in the deaths of two crew members. “The world must not be silent in the face of Iranian terrorism that also harms freedom of shipping,” said former acting Israeli Prime Minister Yair Lapid at the time.

Iran firmly denied any link with the attack. However, this attack followed the one that caused the Kharg, Iran's largest warship, to sink on June 2, 2021, injuring 33 people on board and causing widespread oil pollution.

The attack against Pacific Zircon comes days after the US Navy intercepted a boat carrying substances able to fuel a dozen ballistic missiles in the Gulf of Oman on Sunday, as well as explosive material from Iran along a route typically used by the Houthi rebels, who are supported by Tehran in the conflict in Yemen that has been going on since 2014.

Amid months of widespread protests in Iran after the death of a young woman in morality police custody, the Vienna negotiations on the revival of the 2015 nuclear agreement, from which former US President Donald Trump had unilaterally withdrawn in 2018, have stalled.

The latest parliamentary elections, held in Israel on Nov. 1, also led to the designation on Sunday of Benjamin Netanyahu to form a new government that is expected to include heavyweight figures from the far right, holding a hard line against Iran.

Israel, which views Iran as an existential threat, has been seeking for several years to form partnerships in the Gulf to consolidate an anti-Iranian front, as shown by the Abraham Accords signed in 2020.

US President Joe Biden made it clear during his visit to the region this summer that Washington supports the creation of a regional security architecture that includes Israel to deal with the perceived Iranian threat through regional proxies. The inclusion of far-right figures in the Israeli government could, however, thwart these ambitions.

The US and several Gulf countries regularly denounce Tehran's actions in this particularly strategic maritime zone, which is an almost exclusive shipping lane connecting the petro-monarchies to foreign markets.

Earlier this month, Saudi Arabia passed on information to the US about potential imminent Iranian attacks on the kingdom or on Erbil, in Iraqi Kurdistan, aimed at diverting attention from the protests in Iran.

The incident could raise fears of escalation as the reactivation of the nuclear deal looks increasingly unlikely. Tehran's demands are still seen as maximalist, while concessions to the Islamic Republic in the midst of a violent crackdown on a popular uprising would be difficult to justify.

This article was originally published in English in L'Orient-Le Jour. Translation by Joelle El Khoury.

Israel has blamed the incident, described as a “provocation,” on Iran, its enemy in the region, amid tensions and stalled nuclear deal talks.What happenedAround 3:30 pm on Tuesday, tanker Pacific Zircon was hit by a projectile off the coast of Oman, said Eastern Pacific Shipping, the owner of the ship.According to Samir Madani, co-founder of TankerTrackers.com, which focuses on maritime...