The TV channel accused supporters of the Aounist's "Old Guard" of having caused the violence, while the latter puts "all the responsibility" of the clashes on MTV. 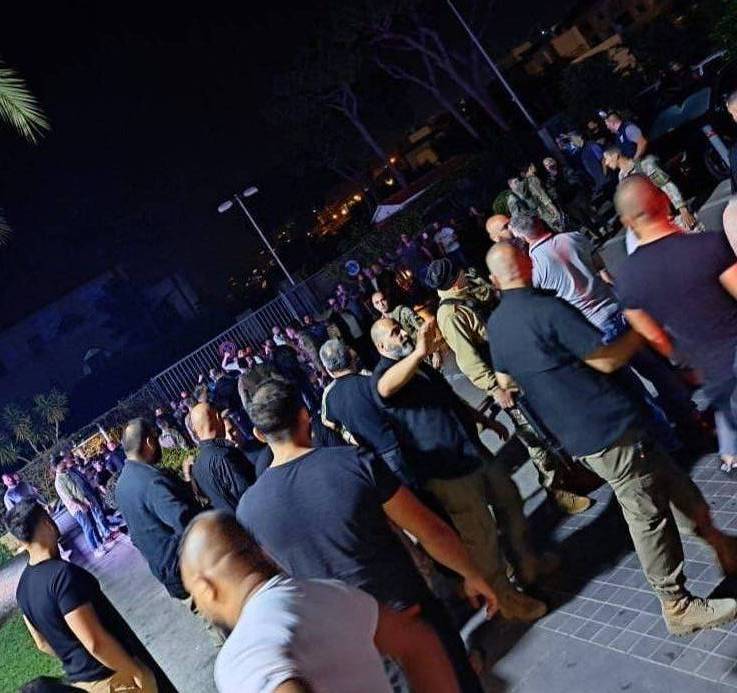 A clash erupted between members of the Free Patriotic Movement, known as "The Old Guard," and the audience of local channel MTV's "Sar al-Waet," or "It's About Time," talk show on Nov. 4, 2022. (Courtesy of Michel Hallak)

BEIRUT — Several Lebanese MPs on Friday condemned the violence that erupted between supporters of the Free Patriotic Movement, known as "The Old Guard," and the audience of local channel MTV's "Sar al-Waet," or "It's About Time," talk show on Thursday, where gunshots were fired next to the channel premises and several were injured.

It is not clear yet what sparked the clash. "The Old Guard" claims itself to be an independent group that functions within the constants set by the former president and cites its members to be from “the Aoun Generation," in reference to former president Michel Aoun, FPM founder.

According to a statement by MTV, whose studios are in Naqqache, Mount Lebanon, FPM members "deliberately" started smacking the audience "using hands."

"The clash moved from inside the studio to the outer courtyard and the entrance to MTV where shootings took place and screens and external facades were destroyed, and a number of people were wounded," according to MTV's statement. MTV added that FPM supporters also chanted "God, Lebanon, and only Aoun."

The Lebanese Army tweeted that its forces intervened to resolve the problem and managed to bring things back to under control.

The Lebanese Forces denounced, in a statement, "the attack on MTV, which transcends on the spot clashes due to the sabotage and the attack on its studio that took place, which serves as evidence. This unacceptable behavior indicates the rejection of everything that is another opinion and a free media, and deep and clear hatred for the free media that is embodied in this station."

LF called on "the competent judiciary to handle the file of the attack on the station, and to hold the perpetrators accountable as soon as possible, because any procrastination or treachery encourages the perpetrators to commit security-related acts in the future, threatening the only remaining blessing of stability for the Lebanese."

Lebanese Forces MP, Ghayath Yazbeck condemned "the attack on MTV by 'The Old Guard,'" adding that those supporters are "a product of Aoun's unchanging mind."

"The attack on MTV reminded us of the attack on Bkirki and evoked the scene of the black shirts," Yazbeck said.

Forces of Change MP Mark Daou said, in a tweet following the clashes, that "freedom of the media is our freedom, standing in solidarity" with MTV and its show.

Daou added that "the guests' militia actions, chanting 'with soul, with blood,' prove that the disruptive and failed mind that has been controlling the state for years has become bankrupt, and only thuggery remains for it."

MP Ashraf Rifi echoed Daou's comments, sending his "support for MTV and for the presenter, Marcel Ghanem, in the face of bullying and slander by those who are nationally bankrupt, so they resorted, as usual, to incitement and sedition."

MTV also said that it "leaves dealing with these people to the security and judicial authorities," confirming that it "will refuse, until further notice, to receive this group of audience on the 'It's About Time' show, as a result of what they did yesterday, despite allowing them to repeatedly express their opinion." However, MTV added that it will continue to "welcome guests belonging to FPM to express their positions and their party's positions."

For their part, FPM supporters accused MTV's security staff of starting the brawl.

An FPM supporter accused in a recorded statement that MTV's security was the one to start the clash calling the incident a “deliberate attack," and adding that the channel's security were the ones who fired the gunshots. "The Old Guard" also released a statement holding MTV's management fully responsible "for transforming a media platform that is supposed to be a space for dialogue, into a platform for assault and beating," threatening that if "this farce" doesn't stop immediately, "we will take urgent action, on the ground and legally."

Caretaker Minister of Information Ziad Makari also condemned, in a statement, the attack and regretted the casualties, saying that "everyone is required to demonstrate the highest levels of national responsibility to overcome the current crisis."

Makari, who is close to Marada Movement, known to be a rival to the FPM, called on "political forces and the media to stay away from everything that provokes tension," and called on everyone to "exercise self-censorship in expressing positions and opinions, taking into account the general situation, which is delicate and complex."

Earlier this week, a report on freedom of expression, published by the Samir Kassir Foundation's SKeyes Center for Media and Cultural Freedom revealed an increase in violations against the media and cultural activities, with over 800 cases reported during Aoun's presidential term.  Abuses documented by SKeyes include assassinations, armed attacks on media properties, attacks on journalists and activists by official and unofficial parties, summonses for interrogation, threats and intimidation, official or unofficial censorship of cultural works and activities, blocking of electronic content, prison sentences, trials by non-competent courts — such as the military court — as well as arrest and detention.

BEIRUT — Several Lebanese MPs on Friday condemned the violence that erupted between supporters of the Free Patriotic Movement, known as "The Old Guard," and the audience of local channel MTV's "Sar al-Waet," or "It's About Time," talk show on Thursday, where gunshots were fired next to the channel premises and several were injured. It is not clear yet what sparked the clash. "The Old...