Lebanon’s next president won’t be Bassil, but they’ll need his endorsement

In a televised interview, the head of the Free Patriotic Movement addressed nearly all stakeholders concerned with the upcoming presidential election. 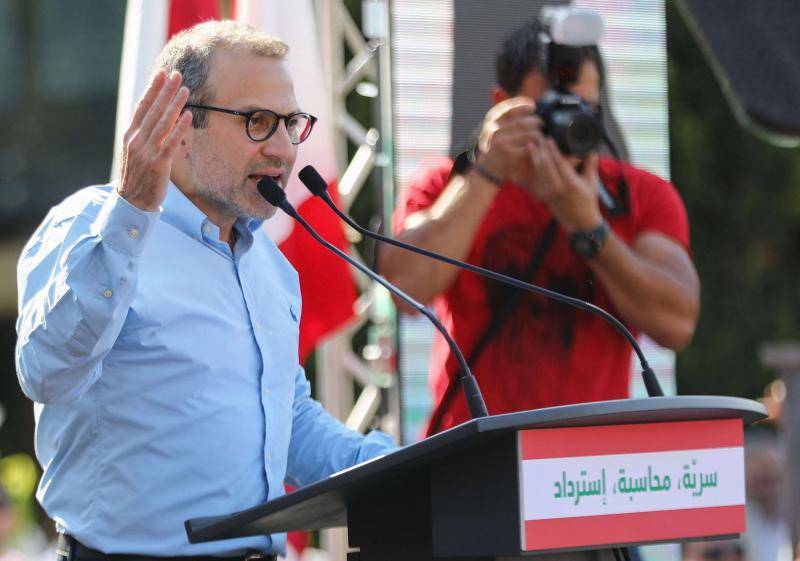 Bassil was keen on sending political messages to major stakeholders concerned with the race, putting forth a clear equation: Though he himself will likely not be the next president, the successor of current President Michel Aoun will not be elected without Bassil’s endorsement.

According to information obtained by L’Orient-Le Jour, Bassil traveled last week to Paris, where he met with Patrick Durel, the French President's Middle East and North Africa advisor. The two men discussed several issues, including the formation of a Lebanese cabinet, the maritime border demarcations and the presidential elections, which are slated to take place in October.

Bassil first addressed the leader of the Marada Movement, Sleiman Frangieh, who is seen as the only figure so far to have unofficially presented himself as a presidential contender — an ambition that he no longer hides in public appearances.

Last week, when the arrest of Archbishop Moussa al-Hage at the Ras al-Naqoura border crossing sparked major controversy, Frangieh arrived in Diman , the summer seat of the Maronite Patriarchate.

Frangieh used the opportunity to emphasize his closeness to Maronite Patriarch Bechara al-Rai.

The Marada leader, however, was also keen on voicing that he “does not plot against (his) allies, but does not take orders from them either,” in a clear desire to present himself as a candidate acceptable to all and not just Hezbollah.

Bassil was quick to bring him back down to earth.

While the FPM leader said he was not “enthusiastic” about the idea of entering the presidential race himself, he conveyed a clear message that he will not stand idly by.

“I can be president or a president maker,” Bassil said in Friday’s TV interview.

Asked whether he would endorse Frangieh as Aoun’s successor, Bassil said, “I see no reason to support his candidacy.”

Usually opposed on the political scene, and even more so since Aoun’s ascension to the presidency in 2016, there has been a recent rapprochement between Bassil and Frangieh.

In April, during Ramadan, Hezbollah leader Hassan Nasrallah brought the two men together around an iftar dinner.

And last week, the FPM leader received in his home in Laqlouq MP Farid al-Khazen, a close associate of Frangieh.

Rai has stressed in a recent sermon the need to elect a new president who should be “above political and partisan alignments,” while Bassil commented in Friday’s interview that the new president should be a figure “representative” of Christian public opinion, preferably with a considerable parliamentary bloc.

The Marada Movement, however, only managed to elect one MP during the May 15 legislative elections: Tony Frangieh, who nevertheless managed to form a parliamentary group of four MPs.

So, did Bassil, the “president maker,” block Frangieh’s way?

“It’s a bluff,” a source close to Frangieh, who wished not to be named, told L’Orient-Le Jour.

“Gebran Bassil knows very well that he cannot choose the next president on his own; they will instead be elected on the basis of a broad agreement,” the source said.

“Aware of the fact that Frangieh is a serious presidential candidate Bassil is trying to show himself in a position of strength,” he added.

The FPM leader could be conveying to Frangieh that if he wants to be elected, he has to count on Bassil’s support in exchange for major concessions.

Bassil has not closed the door to a dialogue with the Marada Movement — a negotiation in which Hezbollah could play the role of arbitrator.

Bassil did not spare Hezbollah his implicit messages.

While he praised the party’s political role, which according to him has strengthened Lebanon’s position in the maritime border dispute with Israel, Bassil was less complimentary about Hezbollah’s choices on the local scene.

“We can blame our ally for returning Najib Mikati back to the Serail [the headquarters of the Lebanese government],” Bassil said, in reference to a tug of war between the premier-designate and the presidential camp over the formation of the next cabinet.

The FPM accuses Mikati of not wanting to carry out his mission of forming the government, preferring to maintain the current caretaker body until the election of a new president.

Mikati has publicly rejected these accusations, stressing that he has no desire to obstruct the process, and that he had already presented a cabinet lineup to Aoun, who has yet to respond.

By emphasizing his dissatisfaction with Hezbollah, Bassil could be sending an implicit message that he wants the party’s support in the upcoming presidential battle, whether in potential negotiations with Frangieh or in his decision to present another candidate.

However, Bassil did not mention Hezbollah’s role in the election, as if to indicate that interest in the race was restricted to Christian parties.

Hezbollah appears to have understood the message.

“Without the support of one of the two major Christian blocs (the Lebanese Forces or the FPM), no candidate can claim to be a candidate for the presidency,” Faisal Abdel Satter, a political analyst close to Hezbollah, told L’Orient-Le Jour.

“In addition, if Hezbollah decides to officially endorse Sleiman Frangieh, it won’t be a confrontational [battle] as was the case with Michel Aoun, who blocked the presidential race for two years,” he added. “For now, Hezbollah will remain on the sidelines, until there is an inter-Christian agreement.”

Bassil made it clear on Friday that he would not hesitate to turn to the LF, Hezbollah’s sworn enemy, to reach an agreement on the next president.

The LF has been shouting from the rooftops that it won big in this year’s legislative elections, overtaking the FPM on the Christian scene with 19 elected MPs against 17 for the FPM.

“We have the largest bloc in Parliament,” he said on Friday.

The FPM leader is counting his allies, such as Tashnag with three MPs, in addition to Mohamed Yahya, an MP for Akkar, bringing his bloc to 21 MPs.

By positioning himself at the top of the Christian political scene, Bassil sent a message to the LF that he remains essential for the election of the next president.

Bassil was also keen to focus his attacks on army chief Gen. Joseph Aoun, whom Geagea has endorsed for the presidency on several occasions.

“Geagea, who claims to be defending the state and the Constitution — is he planning to propose a constitutional amendment to allow the army commander to become president?” Bassil asked.

According to the Lebanese Constitution, first-ranking civil servants must wait at least one year after the end of their term before they run in a presidential race.

“We have to stop this logic according to which major Maronite civil servants are automatically eligible for the presidency,” Bassil said, going so far as to state that “the military institution in Lebanon has collapsed.”

He added that the remark was “not directed against anyone” specifically.

During a televised interview Friday, Free Patriotic Movement leader Gebran Bassil spoke at length about his likely role in Lebanon’s upcoming presidential election. The interview was broadcast on FPM-affiliated channel OTV and Hezbollah’s Al-Manar TV.Bassil was keen on sending political messages to major stakeholders concerned with the race, putting forth a clear equation: Though he himself...