Will the Interior Ministry validate this civil union, which was performed legally in the United States while the couple was physically present in Lebanon? This is the question that is on everyone’s lips. 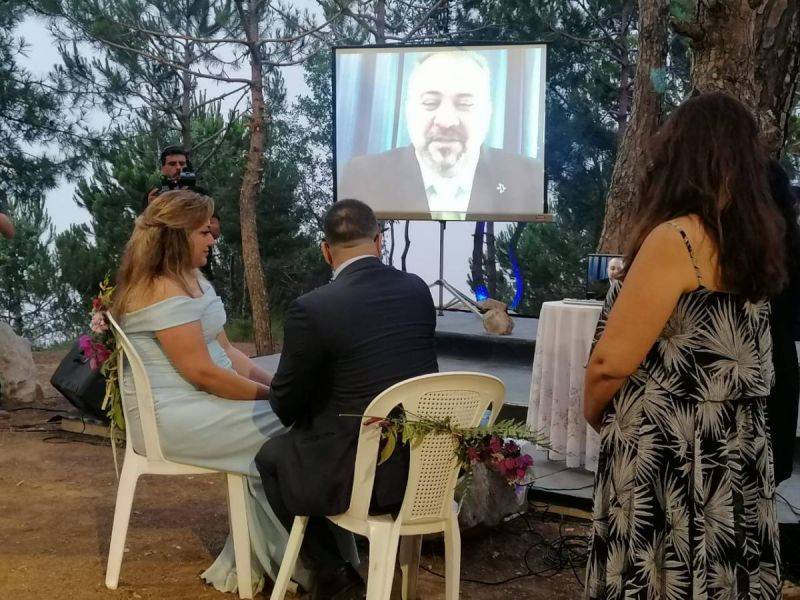 In Dhour Choueir, on July 10, Omar Abdel Baki and Najwa Sbeity are united civilly and online by a judge from the US state of Utah. (Photo provided by the couple)

On July 10, a Lebanese Druze-Shiite couple, Omar Abdel Baki and Najwa Sbeity, tied the knot in a civil ceremony in Dhour Choueir. The couple was physically present in Lebanon, a country where civil marriage is prohibited unless carried out abroad (based on decree 60 L.R. of 1936), and where personal status matters are regulated by the religious communities’ laws.

But this union took place online, officiated by Christopher Scuderi, an American judge who was physically present in the state of Utah while performing it.

Utah is a state that since 2020 and following the outbreak of COVID-19 pandemic has recognized virtual marriage ceremonies, even when the couples are in another country.

Abdel Baki and Sbeity are not the first Lebanese to get a virtual civil marriage — or at least so they think, in the absence of data from the Ministry of Interior.

On the other hand, they are the first to publicize their approach, with the aim of presenting the authorities with a fait accompli and officially registering their marriage in the civil status registry.

The couple told L’Orient-Le Jour that they believe they should not face any problem registering their civil marriage, since the court in charge of making it official is located in the United States, in Utah, which has legalized virtual marriages — the marriage, they said, is as if they were abroad.

To do so, the marriage certificate signed by the couple and the American judge will have to go through the Lebanese consulate in the United States, before being sent to the Lebanese Ministry of Foreign Affairs and the Ministry of Interior.

However, the Ministry of Interior refused to comment on the admissibility of the procedure for the time being.

A sources with the ministry promised, however, that “the matter will be discussed when the documents arrive. But not before that.”

Here’s a closer look at a marriage ceremony that aims to break the codes and free couples from the yoke of religious communities, their patriarchal and even macho laws, which discriminate against women.

Abdel Baki, a math professor, and Sbeity, an English professor, are in their 40s. Each having had a first marriage, they just wanted to be together.

The couple are members of the Syrian Social Nationalist Party, which calls for the separation of religion and state and for a unified personal status law that recognizes civil marriage and grants equal rights and duties to both spouses.

The couple was also confronted with a very Lebanese reality. Sbeity’s passport had expired, and it was almost impossible for her to renew it in light of the unprecedented crisis crippling the country.

“So, we were looking for a way to get married in Lebanon,” said the university professor and English coordinator at a private school. The certified translation of her ID card served as an official document.

While the couple had a “national marriage,” as per the SSNP’s customs, they soon realized that it had no legal standing.

It’s not about removing one’s religion

However, it was not on the table for them to remove their religion from the civil status registry, as Khouloud Succariye and Nidal Darwiche, the first couple ever to tie the knot in a civil ceremony in Lebanon, had done in 2012.

“Each of us will keep their religion. We even had a religious marriage ceremony, before this civil one, administered by a Shiite sheikh, since the Druze religious sect to which I belong is against interfaith marriage,” said Abdel Baki.

The couple had informed the sheikh of their intention to get a civil marriage and to register it with the Lebanese authorities.

“He administered our marriage with full knowledge of the facts,” he said.

At the same time that Omar and Najwa were searching for the right address to get married, the Antoun Saade Cultural Foundation of the SSNP launched an initiative to assist couples in getting a virtual marriage while physically present in Lebanon, with all costs covered.

This initiative is in line with the principles of the SSNP, which submitted to Parliament a unified personal status bill in 1998.

“This draft law, which establishes civil marriage, is based on equality between the spouses, advocates the separation of religion and politics and lifts barriers between different religious communities,” said Dia Hassan, the cultural foundation’s head. “Unfortunately, it has been shoved in a drawer in Parliament.”

The foundation hoped through the initiative it launched in early 2022 to trigger a snowball effect, given that it is very hard for the Lebanese youth, affected by the economic and financial crisis, to get married abroad.

Previously, the initiatives were timid, even isolated. Only Abdel Baki and Sbeity seized the day. But it is a long-fought battle.

“In the long term, we are planning to create a pressure group with all the players that are campaigning for civil marriage in Lebanon,” Hassan said.

Re-sparking the debate in the public sphere

Will Abdel Baki and Sbeity succeed in registering their online civil marriage in Lebanon? Will this marriage break the rigid laws of the local religious groups? The debate has already been sparked in the public sphere. However, not all personal status specialists share the same opinion.

While some consider that without a unified personal status law, all initiatives are tantamount to mere illegal attempts designed to force the state to comply, others perceive that the case creates a real precedent and is likely to democratize civil marriage in Lebanon, although this couple’s marriage is deemed contracted abroad.

Ibrahim Alfred Traboulsi, lawyer, university professor and family law expert in Lebanon, pointed to the legal deadlock on the civil marriage issue, and the “absurdity” of the Lebanese legislation that authorizes civil marriages only if contracted abroad, which undermines Lebanese sovereignty.

He said when it comes to Abdel Baki and Sbeity, they “committed a breach of law by expressing their desire not to submit to religious laws,” similar to the civil society that “multiplies pressure, sometimes to the point of provocation, to create a fait accompli.”

“As long as there is no personal status civil law that regulates all the provisions of a civil marriage in Lebanon, this marriage is deemed invalid,” he said, wondering if this marriage will be registered with the Ministry of Interior.

As this reality will certainly escalate, Traboulsi stressed on the need “that Parliament votes on a law authorizing civil marriage in a Lebanon that proclaims itself democratic.”

He also deplored the spread of prejudice against civil marriage. “Some say that civil marriage is immoral and against religion. However, by establishing civil marriage, it is freedom of conscience and of choice that is safeguarded,” he said.

“The virtual celebration of their civil marriage is strong evidence and a firm message to those who want Lebanese men and women to sink into legal schizophrenia and procedural mediocrity,” said the lawyer and former civil society activist.

He noted that “unlike the notarized civil marriages contracted in Lebanon, the physical celebration of this marriage took place in Lebanon, but its legal celebration is in Utah, in the United States, in accordance with the US law that admits this kind of marriage and considers it valid.”

“It is as if Najwa and Omar got married in Utah,” he said. 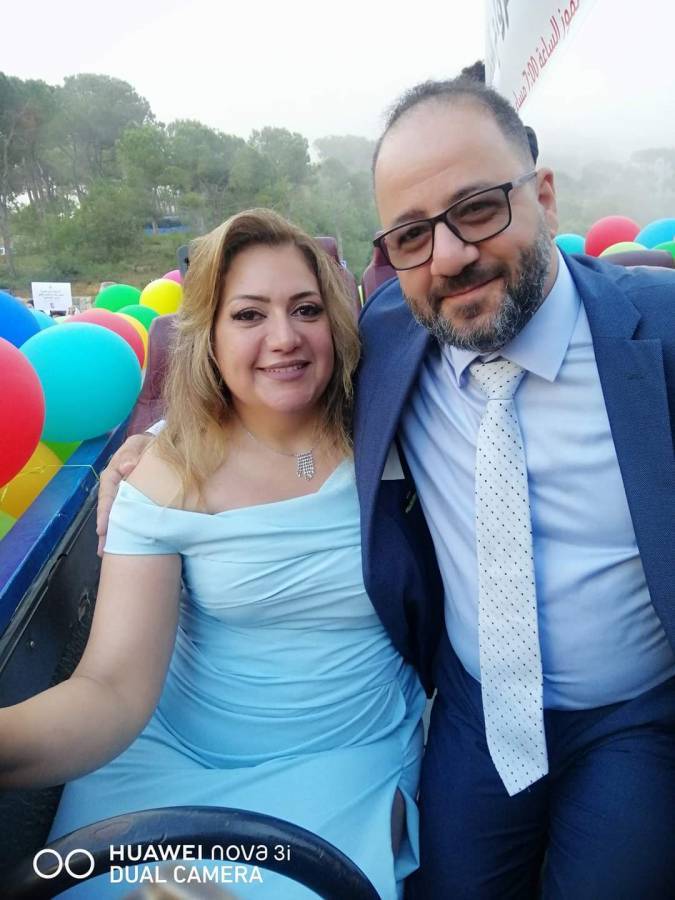 Will Omar Abdel Baki and Najwa Sbeity create a precedent in Lebanon? (Photo provided by the couple)

In this vein, will this marriage be recognized in Lebanon? Baroud immediately said yes.

“This is for the very valid reason that Lebanon admits, recognizes and fully enforces civil marriages contracted abroad under a law other than its own,” he said.

“Moreover, this marriage does not fail to comply with the above-mentioned rule, since it is subject to a foreign civil law. It can in no way be considered as a marriage concluded in Lebanon, since the spouses opted for a virtual ceremony under Utah law,” he added.

However, the spouses must obtain the required documents from the competent US authorities in order to submit them to the consular department, legalize them and transfer them to the personal status department for execution.

In the meantime, civil marriage enthusiasts are getting organized. On Instagram, Tazawaj Online-Lebanon [Get married Online] promotes virtual ceremonies of Lebanese couples performed in the US, and provides legal assistance to all those who want to tie the knot virtually before registering their marriage in Lebanon.

On July 10, a Lebanese Druze-Shiite couple, Omar Abdel Baki and Najwa Sbeity, tied the knot in a civil ceremony in Dhour Choueir. The couple was physically present in Lebanon, a country where civil marriage is prohibited unless carried out abroad (based on decree 60 L.R. of 1936), and where personal status matters are regulated by the religious communities’ laws.But this union took place...