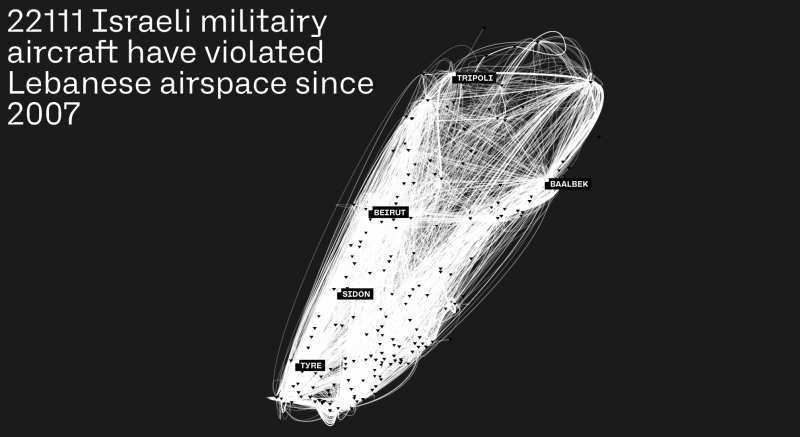 The platform AirPressure.info illustrates on an interactive map, through an imbroglio of loops over the territory, all the air violations committed by the Israeli aviation from 2007 to December 2021. (Credit: Photo taken from AirPressure.info platform)

Lawrence Abu Hamdan, who defines himself as a “private ear” rather than as an artist, launched the AirPressure.info platform, which is the result of a two-year research revealing the numerous Israeli violations of Lebanese airspace, in a bid to clear some of the confusion for the Lebanese and deconstruct some myths.

In the absence of a governance worthy of the name, a regular citizen, an artist, took it upon himself to talk about a sound that the Lebanese know by heart, to the point that it has become a background noise of their daily life and their collective psychology.

This sound, which is roaring at times, buzzing at others, and sometimes exploding, which often makes our homes tremble prompting us to run to the shelters, is that of Israeli military aircrafts and surveillance drones violating Lebanese airspace for decades.

This sound “that we tend to ignore, forgetting that it is lethal,” according to artist Lawrence Abu Hamdan (who prefers to go by “private ear”) has been the subject of a project that he has been working on since 2020.

After a study of nearly two years, the most exhaustive of its kind, he launched the AirPressure.info platform whose contents reveal, among other things, that the Israeli aircrafts have occupied the skies of Lebanon for eight and a half years over the past 15 years. That is 3,098 days.

The report is all the more shocking since it reveals that 22,111 Israeli military jets have flown over our heads since 2007 (after the last war with Israel), terrorizing the Lebanese population from the south to the north, without exception. 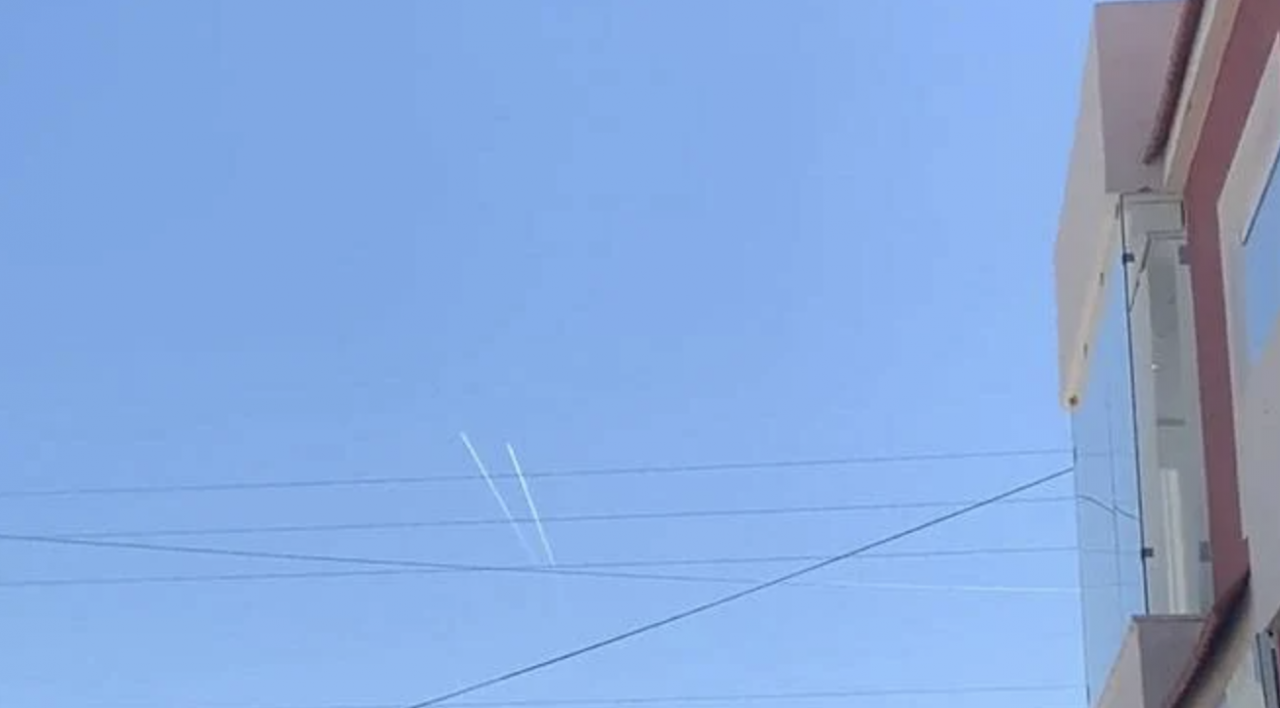 Israeli planes in the skies of Lebanon. (Credit: Image circulated on social media)

This idea of the project came up in the fall of 2020, shortly after the Aug. 4 Beirut port explosion.

“At the time, I heard a lot of people around me saying that they had heard jets flying over just before the explosion rang. As if the air violations were limited to this isolated event, when in the month before Aug. 4 alone there were 400 Israeli overflights,” Abu Hamdan said.

“That’s when I realized that this debate was counterproductive and that something had to be done to show the extent of this crime, to denounce the environment of violence that it had created,” he added.

Abu Hamdan is an independent investigator who is used to using his tools as an artist to decode sound and language.

"These operations go beyond espionage or training and are more on the side of mass surveillance and intimidation," says Lawrence Abu Hamdan. (Credit: Photo taken from AirPressure.info platform)

To execute this ambitious plan, the AirPressure.info team, led by Abu Hamdan himself, extracted data from 243 letters in the United Nations Digital Library System dating from 2006 to 2021, each of which was addressed to the UN Security Council by the permanent representative of Lebanon.

The documents in question include the information detected by the radars, namely the time, duration, type and trajectory of each air violation.

“The problem is that collecting this data was an arduous task. The documents had been uploaded in an unsystematic way, located disparately on the website. The team behind AirPressure.info had to patch all of these documents together and manually transcribe each violation in order to make these numbers accessible and readable,” Abu Hamdan explained.

“The Lebanese Ministry of Defense, the UN Security Council, and the UN Interim Force in Lebanon monitored and recorded these violations and had clear access and ability to do this work themselves. Instead, by storing the data in a piecemeal and uncoordinated fashion, these institutions have contributed to masking the extent of these crimes,” he added, despite managing to complete the project with the creation of Airpressure.info, which was published last week.

The platform includes an interactive map, showing a cluster of loops tracing all air violations committed by the Israeli air force from 2007 to December 2021. 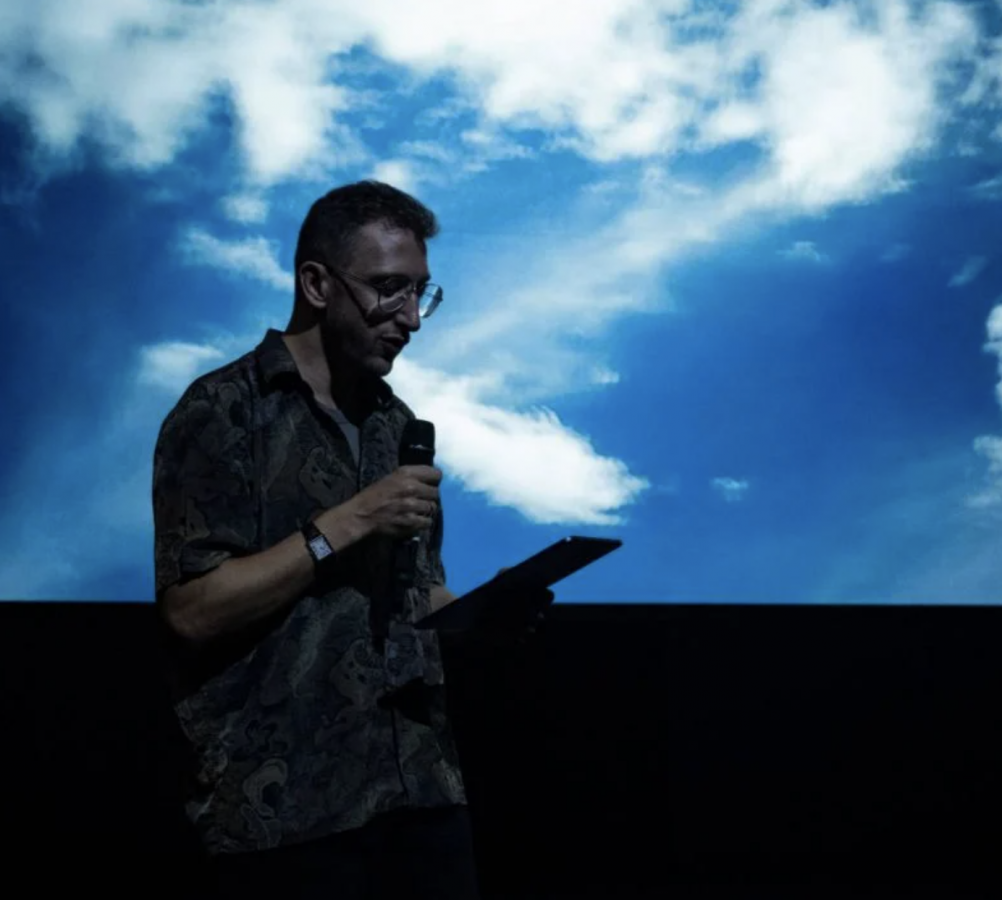 Deconstructing the narrative of Israel and Hezbollah

If we look more closely over the days, months and years, we notice four significant observations.

First, the average duration of an overflight over Lebanese territory is four hours and 35 minutes, while the sounds perceived by the population do not exceed one or two minutes at most. For example, on March 1, 2013, one overflight alone lasted 30 hours and 50 minutes.

Second, the overflights cover the entirety of Lebanese territory, contrary to the established narrative that limits Israeli interest to areas of Hezbollah influence.

Third, most of these operations involve some of the most technically advanced fighter jets or surveillance aircraft in the world, against which the basic Lebanese ground defenses are no match.

“This is almost fictional. And it proves that these operations exceed espionage or training, but rather are on the side of mass surveillance and intimidation,” Abu Hamdan said. 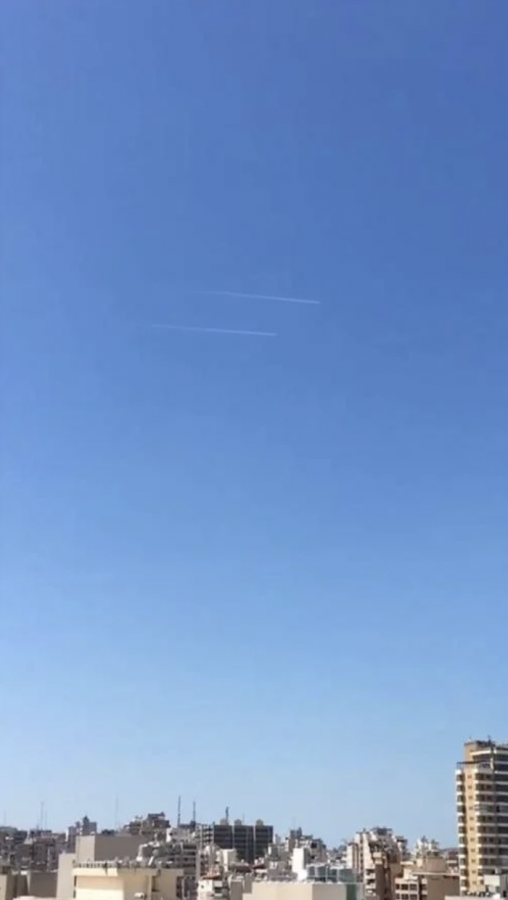 Israeli planes in the skies of Lebanon. (Credit: Image circulated on social media)

Finally, the database collected on AirPressure.info shows only two incidents of fighter jets entering through the Lebanese border and exiting into Syrian territory, contrary to misconception that most of these flights were en route to bomb Syria.

“The idea, through this project, was to deconstruct the Israeli discourse that Hezbollah is its one and only enemy; and the myth of resistance as advocated by Hezbollah which has had more than 22,000 opportunities at least to prove itself,” he added.

“Finally, the goal was also to expose the global weapons strategy that uses our skies as laboratories to test these devices,” Abu Hamdan explained.

About the nickname “private ear,” he said, “On one hand, I use investigation to consolidate and concretize my research; on the other, I use the artistic part of my work to make politics more sensible, in a way.”

In this regard, AirPressure.info is not limited to what is happening in the skies only.

The “on the ground” side of the site maps the reactions of Twitter users when these overflights took place, especially when they occurred at low altitude, causing a state of general panic.

In this sense, the platform also contains 11 articles extracted from scientific journals that detail the physiological effects caused by these aircraft noises, with symptoms ranging from high blood pressure to a drop in blood flow, and of course more exacerbated traumas.

“I know that through this project, I am exposing an inconvenient truth. This is my way of offering the Lebanese a little bit of clarity, something they are constantly deprived of. And also, perhaps, to contribute to healing their traumas through knowledge,” Abu Hamdan said.

Over the last decades, his project seems to be one of the most prominent in deconstructing something many Lebanese are already aware of but may not truly know the extent to which these violations take place.

Lawrence Abu Hamdan, who defines himself as a “private ear” rather than as an artist, launched the AirPressure.info platform, which is the result of a two-year research revealing the numerous Israeli violations of Lebanese airspace, in a bid to clear some of the confusion for the Lebanese and deconstruct some myths.In the absence of a governance worthy of the name, a regular citizen, an...