The art of kicking the can down the road: Your weekly financial news roundup 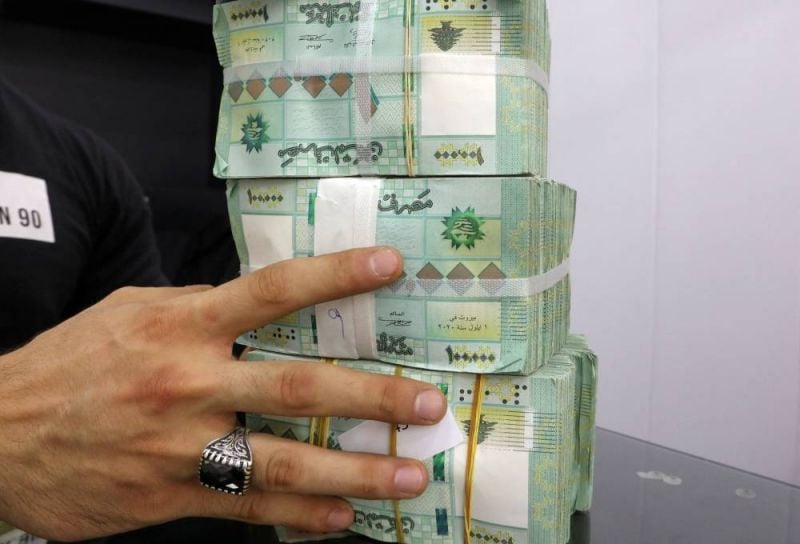 A money exchange vendor displays Lebanese lira banknotes at a currency exchange shop in Beirut on May 24, 2022. (Credit: Mohamed Azakir/Reuters)

Not a day goes by without wondering where the central bank governor Riad Salameh vanished. The man may be lying low but his words about the lira doing well, just a few weeks before the country imploded (see here, here and here) still echo in the minds of every Lebanese. So much so that the words have become symbolic of everything that is wrong with the country.

At the time of writing, the lira is trading at LL28,000 to the dollar after hitting an all-time low of LL37,700 on Friday. The lira’s fortunes and that of the governor will forever be intertwined, and its demise will be a constant reminder of Salameh’s downfall.

However the governor is refusing to let go without a fight. Not only has he failed to show up for a hearing on the accusations of embezzlement, now Mount Lebanon Prosecuting Judge Arlette Tabet has postponed the proceeding until December — yes, a full seven months. The country’s critical industries are shutting down one by one, but accountability is seemingly not a priority.

Earnestly, what is the central bank doing? Isn’t it supposed to safeguard the monetary and economic stability of the country and the soundness of the banking sector? Or isn't it at least, when that soundness is compromised, supposed to work tirelessly to chart a course out of the storm?

Circular 161 is dead, and no number of words can change that, not even late Friday afternoon tactics.

The central bank took Lebanon by surprise on Friday. In a statement released at 4:34 p.m., when most were trying to shut out the week’s difficult events, the central bank advised all residents and companies looking to buy US dollars with their lira to head to banks on Monday and fill in the required applications.

The central bank added that conversions will be executed at the Sayrafa rate — last recorded at LL24,600 to the dollar — and will be completed within 24 hours. It also instructed banks to keep their branches open until 6 p.m. for three consecutive days to accommodate clients' requests.

Whether banks will heed Banque du Liban’s instructions and the intervention will come off as planned remains to be seen, but nevertheless the lira immediately strengthened on the back of the announcement, gaining 30 percent in a matter of hours. Recently, another lira was on a similar rollercoaster. On Dec. 20, the Turkish lira whipsawed by as much as 40 percent during the day, climbing from a low of 18.25 to the dollar to a high of 13.10. This was the day when the Turkish President Recep Tayyip Erdogan introduced a series of steps to stem the currency crash. In the following days the Turkish lira traded as high as 10.20 to the dollar before weakening again to 16.15.

This just goes on to show that “It is the economy, stupid,” so stop buying time and wasting dollars.

Just ask Finance Minister Youssef Khalil; he understands the basic concepts of supply and demand. Khalil told Sputnik news agency, “The reasons for the rise in the exchange rate of the US dollar in the Lebanese markets are largely related to external factors, and there is no chaos in the currency market.”

The parallel market rate will probably align again with the Sayrafa rate, at around LL25,000 to LL26,000 to the dollar. However, whether the impact of the new measure will last longer than the previous ones, is open to debate.

Despite the central bank having more firing power at its disposal at the beginning of the crisis, the lira still plunged and racked up huge losses. Now with foreign currency reserves at their lowest level ever and with the potential for further political gridlock looming larger than ever, it would be foolish to expect a different result. Think of the often-quoted definition of insanity.

Where is Wassim Manssouri, BDL’s first vice-governor, or Bachir Yakzan, the second vice-governor or Salim Chahine and Alexandre Mouradian, the third and fourth vice-governors? Are they watching? Isn’t it time for a putsch inside the central bank? For a revolution across the country? What will it take to incite such a revolution — a bankrupt central bank and the lira at LL100,000 to the dollar?

Oh well, not everyone sees the urgency. The parties responsible for the crisis continue to conjure up creative excuses to extricate themselves from their responsibilities. The Association of Banks in Lebanon accuses the government of being after the banks’ blood, while the government, represented by Deputy Prime Minister Saade Chami, retaliates by condemning the bankers for caring only about protecting their wealth. In the meantime, the value of depositors’ money diminishes further by the day.

At least Cyprus, and before it, Iraq, knew the game was up. The former has asked Lebanese banks to shut down their branches on the island. Still, these branches’ closures will be of scant concern to most as total deposits and loans held by Lebanese bank branches represent less than 1 percent of the total deposits and loans held by the Cypriot banking system.

FitchRatings also questioned the country’s economic trajectory after parliamentary elections. In an article published on Friday, the American credit rating agency said “The inconclusive outcome of Lebanon’s elections on 15 May will make it challenging for any camp to form a stable governing majority in parliament, further complicating the country’s ability to implement financial and economic reforms”

Lebanon’s Economy Minister Amin Salam says the dollar is not reflecting the true fundamentals. He also recently stated that there was no decision to lift the subsidies on wheat, as the price of bread continues to skyrocket, and the $150 million loan from the World Bank to fund wheat imports remains on hold, while Salameh keeps tightening the purse strings.

Even Health Minister Firass Abiad asked Prime Minister Najib Mikati to intervene with Salameh on his behalf so hospitals can withdraw some of their funds stuck at the central bank and commercial banks, but with no success.

Stay safe at least until Tuesday when the country will witness for the seventh time Nabih Berri’s reelection as Speaker of Parliament. Not a small feat, but still a long way from having a new functioning government to steer the country away from the abyss. After Berri, it is up to Mikati now to show his mettle and secure the top job.

Not a day goes by without wondering where the central bank governor Riad Salameh vanished. The man may be lying low but his words about the lira doing well, just a few weeks before the country imploded (see here, here and here) still echo in the minds of every Lebanese. So much so that the words have become symbolic of everything that is wrong with the country.At the time of writing, the lira is...