Ibrahim Mneimneh, who was elected to one of the Sunni seats in the Beirut II constituency, made a breakthrough that few observers had anticipated: He won 13,281 preferential votes. 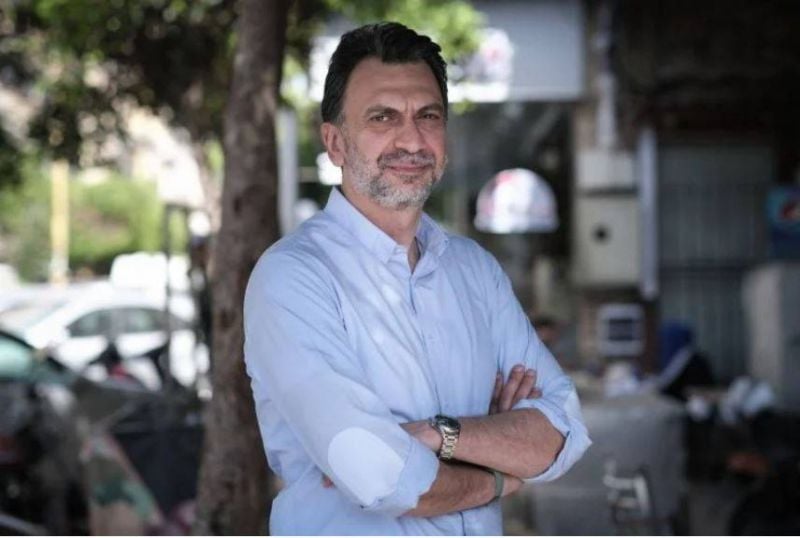 He achieved a feat that few observers had anticipated: winning 13,281 preferential votes in the constituency of Beirut II, and he is the second highest Sunni vote getter nationally. (Credit: Joao Sousa/OLJ)

Ibrahim Mneimneh’s phone keeps ringing. Sitting in his living room strewn with family photos and musical instruments, the candidate who was elected to one of the Sunni seats in the Beirut II constituency answers the phone every single time.

With his three-day stubble, and a face with dark circles that make it look hollow but always attentive, he keeps meticulous records of his interlocutors’ personal information once he hangs up.

“Before I forget,” he said, apologizing for interrupting the interview.

Since his election, the 46-year-old urban planner has been taking center stage.

The press can’t get enough of him. The Beirut families want to congratulate and meet him, and for good reason. He made a breakthrough that few observers had anticipated: winning 13,281 preferential votes in a constituency known as “the mother of all battles.”

More surprisingly, he is the second most popular Sunni candidate nationwide. Amid the vacuum left by the withdrawal of Saad Hariri, some analysts already see him as the next Sunni leader.

“I am aware of my Sunni background, but I will not allow myself to be dragged into a narrow sectarian position,” he said. “If we are to move forward with our country, we must admit that we are in this situation because of sectarianism. We must shift into a secular state. I represent this vision.”

Along with 13 other candidates from the protest movement, including Melhem Khalaf and Waddah Sadek from the same list, “Beirut the Change,” he is entering Parliament through the main door.

Yet nothing suggested that he was predestined to politics. In 1993, the country was in turmoil: after 15 years of civil war, it was time for economic and social recovery.

Then Prime Minister Rafik Hariri, who saw himself as the figurehead of this reconstruction, organized rallies with his teams to bring young people into his party.

Mneimneh, who was born and raised in Jeddah, moved to Beirut to attend college. Intrigued, while he was a student at the Arab University of Beirut, from which he graduated in architecture, he attended two meetings of the Future Movement.

“The profile of people, the way of doing things, the language... I felt that it did not resemble me,” he added.

His real political awakening had to wait until 2015. Faced with the magnitude of the waste crisis and the “You stink!” movement denouncing the inertia of politicians and corruption, Mneimneh took part in the demonstrations that swept downtown Beirut on a daily basis.

“That’s when I said to myself that something had changed in the country,” he recalled.

It all came together very quickly. In 2016, he headed the list of the Beirut Madinati campaign, which he helped establish, in the municipal elections.

Two years later, he ran for parliamentary elections on the Kulluna Beirut list. Although both elections ended in failure, the beginnings of change could be felt.

“From there, we decided to think about the future of the country. We met every week with other people, and we expanded our network of activists. Ibrahim made a name for himself,” said Nohad Yazbek, his running mate in the 2018 and this year’s legislative elections.

The national earthquake occurred a year later with the Oct. 17, 2019 uprising. Mneimneh was one of those who chanted “Kellon yaaneh kellon” (all of them means all of them).

A few months into the protest, fatigue, attacks by the security forces and supporters of the Amal and Hezbollah parties on protesters, and then the pandemic outbreak, finally got the better of the protest momentum.

“We no longer had a compass, so I decided to take a step back,” he explained.

He decided to bring together a group of people with different ideals to “find a common ground that we could use to confront the ruling class.”

From now on, Mneimneh will be able to do so directly from Parliament.

“He is a courageous person, a revolutionary, a good listener and someone we can count on to discuss projects, petitions and causes that are important to us,” said Carmen Geha, an activist and professor at the American University of Beirut.

Altogether, the “Beirut Resists” campaign mobilized an army of some 200 volunteers for three months, whose average age ranged from 19 to 24 years.

“I did not go looking for them, they came to me. They are full of political ideas and have a strong capacity for action and persuasion,” he said.

“I feel closer to them than to the people of my generation,” added Mneimneh, who is a father of three daughters who have distributed leaflets with him.

On the night of Sunday to Monday, it was these young people who carried him on their shoulders to celebrate his victory in their headquarters.

“There was no hierarchy or condescension on his part. Decisions were taken after debates and discussions,” explained Dima Ayash, 24, who was part of the electoral machine of “Beirut Resists.”

With his running mates Nouhad Doumit and Samah Halwani, Mneimneh went directly to the streets to present their program focused on social justice, secularism, sovereignty and progressive economic and banking measures.

Their positions, especially on civil marriage or the rights of LGBTQ+ people, however, earned them attacks from conservatives and on social networks until the last days before the election.

“Mosques were calling him an infidel during Friday prayers,” said Karim Safieddine, who was part of the electoral machine of “Beirut Resists.”.

“In the end, with a small budget, barely a few posters but a clear political discourse, he did better than the candidates who threw money around to get votes,” said Mohammad Farida, an economist and a friend of the new MP, whom he met during the Beirut Madinati adventure in 2016.

Those close to him describe him as a man “without compromise.”

Mneimneh is however preparing to enter a Parliament that is as divided as the country itself, with no side having obtained a majority.

“We will not be part of the polarization of March 8 and March 14,” he said.

“But there are many issues on which we can agree with third parties or, on the contrary, be at odds with their positions,” he added.

Plagued with an unprecedented economic crisis and under international pressure, Lebanon is running out of time.

The first juncture is drawing near: the election of a new Parliament speaker. Current Speaker Nabih Berri is running to succeed himself.

“We will not vote for any pillar of power,” Mneimneh said.

On Tuesday, FPM leader Gebran Bassil announced that he would not accept a government of technocrats. Here too, Mneimneh does not want to give in.

“We are against the so-called national unity governments because this is what caused the collapse of the country. As a parliamentary minority, our role is to be in opposition and for the executive branch to play its role,” he said.

The article was originally published in French in L'Orient-Le Jour. Translation by Sahar Ghoussoub.

Ibrahim Mneimneh’s phone keeps ringing. Sitting in his living room strewn with family photos and musical instruments, the candidate who was elected to one of the Sunni seats in the Beirut II constituency answers the phone every single time.With his three-day stubble, and a face with dark circles that make it look hollow but always attentive, he keeps meticulous records of his interlocutors’...