In Kesrouan-Jbeil, the FPM is fighting a bitter battle

Gebran Bassil’s party can no longer count on an alliance with businessman Neemat Frem, nor with former army officer Chamel Roukoz, son-in-law of President Michel Aoun 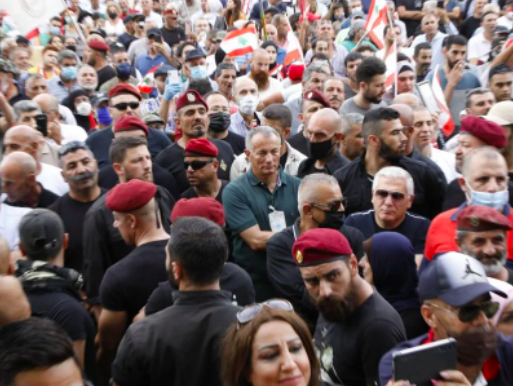 A demonstration on July 18, 2020, in Martyrs Square in Downtown Beirut, sponsored by retired general and deputy of Kesrouan Chamel Roukoz. (Credit: Marc Fayad

After the 2005 “tsunami,” the Mount Lebanon I constituency, which includes the districts of Kesrouan and Jbeil, was perceived as a stronghold of the Free Patriotic Movement, founded by General Michel Aoun, himself a member of Parliament for Kesrouan from 2005-2016.

All eight MPs (seven Maronites and one Shiite) in the constituency were part of the Aounist bloc since Michel Aoun’s return in May 2005 from his exile in France, up until the 2018 elections. That year, the Strong Lebanon Bloc was dealt a real blow.

Of the eight folding seats, the Aounist party had to give up two seats to the Lebanese Forces and two seats to Farid Haykal Khazen, who joined Sleiman Frangieh’s Marada bloc, including the Shiite seat in Jbeil.

The battle expected next May in this constituency is likely to be feverish for the party led by Gebran Bassil, which no longer has the gains of 2018. Even the mission to keep its two remaining seats seems difficult. The FPM, which has formed a common front with Hezbollah in the battle, must face this time, in addition to its traditional opponents, the MPs who withdrew from the Aounist parliamentary bloc in 2020: Neemat Frem and Chamel Roukoz.

Seven lists are competing for the eight seats to be filled. One of them is the result of the alliance between the FPM and Hezbollah. It will face the list sponsored by the LF, which by winning seats in this district made a surprise in 2018 thanks to the clear victory of Ziad Hawat in Jbeil and Chawki Daccache in Kesrouan.

The FPM-Hezbollah duo is therefore fighting the battle in close ranks. This is not the case of the parties opposing the powers in place, nor the forces emanating from the 2019 protest movement. This is the case even though all these parties share the same objective: countering Hezbollah and defeating the Aounists in one of their strongholds.

Thus, Fares Souaid, a former MP in Jbeil, known for his radical positions against the Baabda-FPM team, and particularly against Hezbollah, is sponsoring a list in which he is joined by his long-time partner Mansour el-Bon, a former MP for Kesrouan.

Neemat Frem has also managed to form a list based on his alliance with the Kataeb and the National Bloc.

A fourth opposition list is also competing, sponsored by Farid Haykal Khazen, and includes Chamel Roukoz, son-in-law of President Aoun, similar to Gebran Bassil, but a declared opponent of the latter.

On this chessboard, there is a list sponsored by the Citizens in a State (MMFD) movement of former minister Charbel Nahas, and another one formed by figures emanating from the protest movement.

The battle is likely to be very open in a region where, especially in Kesrouan, family considerations play a more important role than political affiliations.

During the previous elections, the party founded by the head of state was abandoned by its traditional ally, Hezbollah. The latter, against all odds, announced very early the candidacy of Sheikh Hussein Zeaiter (originally from Baalbeck) for the Shiite seat of Jbeil.

This unilateral decision aroused the ire of the Aounists who had to turn to the traditional figures of Kesrouan, including Neemat Frem and Mansour el-Bon. Their list, then led by Chamel Roukoz, had won four seats: Neemat Frem (10,717 votes); Simon Abi Ramia (9,729 preferential votes); Chamel Roukoz (7,300 votes) and Roger Azar (6,793 votes).

For the 2022 battle, the FPM can no longer count on the two leading figures in the region: Neemat Frem and Chamel Roukoz withdrew from the Aounist bloc.

In this vein, Bassil’s party is making quite different calculations in the run-up to the elections. The FPM-Hezbollah list includes Nada Boustani, former Energy Minister, who is running for one of the five seats in Kesrouan, in addition to Simon Abi Ramia and Walid Khoury in Jbeil.

Informed sources said that Khoury, presidential advisor for health affairs, is joining the race at Aoun’s request. As for Abi Ramia, he had won the FPM’s internal elections held in November in a bid to choose the party's candidates for the legislative elections.

The fact that there is a multitude of candidates puts the FPM at risk of losing the second Maronite seat of Jbeil, in case this party’s votes were divided between its two candidates. As for Kesrouan, “we are confident of Nada Boustani’s victory, because she is the only FPM-affiliated candidate” in this district, commented an official of Gebran Bassil’s party.

“As for Jbeil, what matters to us is that one of our two candidates wins the battle. Because we are pragmatic and aware that we will not be able to beat Ziad Hawat,” added Bassam Ghanem, head of the Jbeil branch of the FPM.

The Aounists therefore recognize that it is difficult for them to go back to the 2005-2009 period during which they monopolized representation in this constituency.

On the other hand, the LF’s electoral machine (which has reached out to the National Liberal Party, which supports lawyer Antoine Sfeir) expects to see Ziad Hawat and Chawki Daccache easily re-elected.

Circles close to Hawat’s electoral machine pointed to the 15,000 votes that the MP for Jbeil could garner. “This is explained by the fact that Ziad Hawat is close to all Jbeil people, regardless of their political affiliations,” explained Kamal Richa, an electoral pundit.

He also pointed out that the list led by Neemat Frem will win a seat, that of the resigning MP himself. As for Fares Souaid, his list, which was born after negotiations with Frem and Kataeb failed, could obtain a seat, he said.

The Shiite seat of Jbeil: All eyes are focused on the only Shiite seat in the constituency. In 2018, this seat escaped both the candidate presented by the FPM and the one supported by Hezbollah, whose list did not meet the electoral threshold in this constituency.

Hezbollah’s list had obtained 12,551 votes, while the electoral threshold was 14,452. It did not win any seats, although Hussein Zeaiter obtained the highest score among the Shiite candidates, with 9,369 votes.

His opponent Mustapha Husseini needed only 256 preferential votes to beat him, thanks to the votes of Farid el-Khazen and Fares Souaid, who ran on the same list.

This year, the FPM and Hezbollah agreed in principle on the Shiite seat that would go to Hezbollah in exchange for a Christian seat in Baalbeck-Hermel for the FPM. As a result of this rapprochement, the Shiite businessman Raed Berro, supported by Hassan Nasrallah’s party, has joined the Aounist list.

Theoretically, Hezbollah should win this battle. “In 2022, we will help Hezbollah win the Shiite seat,” said the Aounist official mentioned above. He ruled out the possibility that Hassan Nasrallah’s party would grant votes to the FPM candidates.

“But, if the Souaid list manages to win a seat, and given the negative effects of the voting system that will neither benefit Souaid nor Bon from that, the Shiite candidate on this list, whatever his score, will be elected,” analyzed Kamal Richa.

Two of the Kesrouan seats: At least three of the five future Kesrouan MPs are already assured of being elected: Neemat Frem, Chawki Daccache and Nada Boustani. The other two seats seem to be mainly won either by Khazen or by Salim Sayegh, vice president of Kataeb.

Eight seats to be filled: even Maronite and one Shiite.

2 – The Cry of a Nation: Neemat Frem + Kataeb + National Bloc

5 –We were and We Will remain: FPM + Hezbollah

6 –With You, We Can Until the End: Lebanese Forces + National Liberal Party

7 –We are the change: Protest Movement

After the 2005 “tsunami,” the Mount Lebanon I constituency, which includes the districts of Kesrouan and Jbeil, was perceived as a stronghold of the Free Patriotic Movement, founded by General Michel Aoun, himself a member of Parliament for Kesrouan from 2005-2016.All eight MPs (seven Maronites and one Shiite) in the constituency were part of the Aounist bloc since Michel Aoun’s return in...