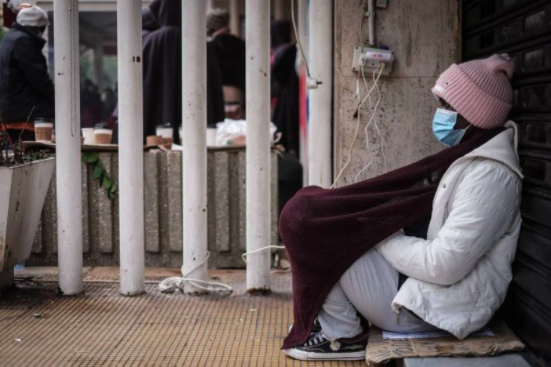 A Kenyan domestic worker, thrown into the street, camped in front of the Kenyan consulate in Badaro, waiting to be repatriated. Photo João Sousa

It’s 5 p.m. and it’s started to rain in Badaro. The January rain is pouring on nearly 30 domestic workers who have settled on the sidewalk, in front of the honorary consulate of Kenya. Two of them head to the place of a neighborhood resident, who lets them use her toilet from time to time.

The others try to shelter from the rain, wrapped up in blankets or in sleeping bags, at the entrance gate to the consulate. Some have been stationed on this sidewalk for two weeks.

Their goal is to pressure the consulate to facilitate their return home. Most found themselves on the street either because they escaped abuse or because their employers simply abandoned them, saying they can no longer afford them amid the economic crisis. Most are without their official documents, their employers having seized them upon their arrival.

Kenya does not have an embassy in Beirut and the nearest Kenyan diplomatic representation is located in Kuwait. Hence, these women have resorted to the honorary consulate in Badaro, which they condemn for failing to cooperate.

Anita, 30, the mother of two boys, worked for a family for four months, she said, before she was sexually harassed by her employer and family quarreling ensured.

“They dropped me in the middle of the street, in the mountains, near Aley. The owner of a shop in the neighborhood helped me to get to the consulate in Beirut,” she told L’Orient-Le Jour.

Her eyes welled with tears as she expressed her fear of returning to Kenya destitute, because her employers have not paid her salary. “I feel like ending my life sometimes,” she said. “I cannot stand receiving a call from Kenya, and hearing that my children are no longer allowed in class because I have not paid their tuition.”

Olive, 31, a Kenyan who worked in Lebanon for ten years, comforted her. She had rushed to her compatriots after she learned from social media that they were sleeping on the streets.

“They are our sisters. They are not familiar with the country, although they have been here for years. We can not give up on them,” said the young woman, who comes to check up on the women every evening, as she had with other domestic workers who’d staged a sit-in at the consulate.

Unfortunately, this bleak situation is familiar in a country where migrant workers are subject to a kafala [sponsorship] system that places them outside the Labor Law.

In the summer of 2020, as the economic crisis began to wreak havoc, dozens of Kenyans camped outside the consulate, in a bid to be repatriated. After weeks of pressure, they finally succeeded.

Ethiopian domestic workers had also slept for weeks outside their embassy in Hazmieh, awaiting repatriation.

Sudanese migrant workers followed in their footsteps, protesting for days in front of their chancellery in Beirut, after they found themselves on the street because of the financial crisis.

Left in the middle of the street in her pajamas

Given that their consulate has so far failed to cooperate with the current sit-in, Kenyan migrants can only rely on NGOs and on the generosity of the neighboring residents to obtain blankets, clothes or food.

One of the neighbors, whose apartment is vacant, is allowing them to use the place to get changed and shower.

They all have harrowing tales. “Last Sunday, we saw a jeep park not far from here,” Olive told L'Orient-Le Jour. A woman stepped out, accompanied with a young Kenyan wearing her pajamas. She pretended that she was heading back to the car to get something, then kicked into gear, leaving the poor girl behind.”

The young woman, whose name has not been revealed [to the press], tried to take her own life in the middle of the street, before her compatriots saved her.

Charlotte Massardier, advocacy officer at Doctors Without Borders (Médecins sans frontières, MSF), confirmed that MSF had moved her to hospital. MSF has been assisting the migrant workers who suffer from psychological distress for years, she said.

‘We are doing what we can do’

Faith, 20, who has settled in front of the Kenyan honorary consulate for several days, does not have a passport, and hopes to obtain a laissez-passer that would enable her to travel. But, all her entreaties with the consulate have so far proven unsuccessful.

“The consulate did nothing to help us. They had promised that the problem would be resolved in two weeks... That was some months ago. The consul is never there and the vice-consul has always refused to listen to us,” she said.

“I worked for eight months for a family that still owes me four and a half months' worth of salary,” Faith said. “The recruitment agency turned a deaf ear and insisted on sending me to a new family. When I refused, I was thrown out and told that I deserved to be abandoned.”

In one piece of good news, a handful of Kenyans, who approached the consulate several months ago, will finally travel this week. “Six or seven domestic workers are expected to fly on Wednesday,” Kenya’s honorary consul in Beirut, Sayed Chalouhi, told L'Orient-Le Jour. “They were granted a laissez-passer.”

Commenting on the other domestics camped out at the consulate, he insinuated that the consulate had not made much progress on the dossiers. “This is an honorary consulate and the consul has other tasks. We are doing everything we can,” he said.

“We are trying to help them, but they need to know that these cases take time, particularly since two or three of them are facing legal actions. Also, we will not be able to work as long as they are settled in front of the consulate.”

The consulate, which has been closed for days, contacted the police Wednesday to force the female demonstrators to leave, but to no avail.

Commenting on the unpaid salaries, the consul said that he “understands” some of the employers’ actions. “When the documents of a domestic worker cost $2,500, and she only works two or three months and then leaves, she lays herself open to the possibility that the employer does not pay her for the days she worked,” he said, adding that responsibility falls with the Labor Ministry and General Security.

In addition to MSF’s psychiatric assistance, other NGOs are trying to provide the domestic workers with legal assistance. “We are trying to determine the various possibilities in order to decide on the most appropriate legal response,” Farah Baba, communication and advocacy officer at Anti-Racism Movement (ARM), told L'Orient-Le Jour.

“In the near future, the departure of those who desire to return home needs to be facilitated. But in the long term, changes need to be made at the consulate, which is responsible for many violations committed against these women,” Baba added.

“When these employees are recruited,” she said, “the employers pay a deposit which, normally, must be used to pay for the return ticket.”

L'Orient-Le Jour contacted the International Organization for Migration which said the IOM is actively working on the file “in cooperation with the Lebanese and Kenyan authorities, and the consulate, in order to facilitate acquisition of travel documents.”

“Our goal is to facilitate the voluntary repatriation of those who desire to return, while giving priority to those who are vulnerable the most,” a source within the IOM said.

“The kafala system and the fact that some migrant workers, including domestic workers, are excluded from labor law protections, heighten their vulnerability to violence, exploitation and abuse, including human trafficking and forced labor,” the UN agency said.

“The IOM has called for legislative reform to be made and affirmed that it will continue to work with the Lebanese authorities to promote well-managed migration [policies],” IOM continued, “and defend migrants’ rights.”

It’s 5 p.m. and it’s started to rain in Badaro. The January rain is pouring on nearly 30 domestic workers who have settled on the sidewalk, in front of the honorary consulate of Kenya. Two of them head to the place of a neighborhood resident, who lets them use her toilet from time to time. The others try to shelter from the rain, wrapped up in blankets or in sleeping bags, at the entrance...