A raid on five banks harboring the accounts of central bank Governor Riad Salameh’s brother, Raja Salameh, was suspended at the last minute. 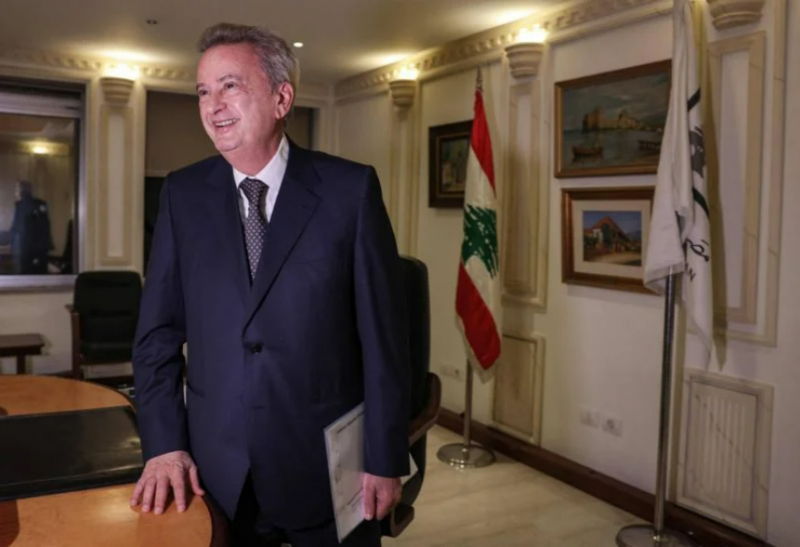 What happened on Tuesday morning in one of Lebanon’s largest banks resembled a scene from a bad television series.

On that day, Jean Tannous, a deputy prosecutor at the Court of Cassation, Lebanon’s highest criminal court, in charge of an investigation targeting central bank Governor Riad Salameh on suspicion of “misappropriation of public funds, illicit enrichment, money laundering and tax evasion,” showed up at the bank, accompanied by armed forces from General Security.

Tannous was supposed to collect bank statements of the accounts of Raja Salameh — the governor’s brother — who is the beneficial owner of Forry Associates Ltd., a brokerage firm.

When he arrived at the first of the five banks mentioned in the investigation, he was informed that the execution of the search warrant had been suspended.

According to a judicial source familiar with the issue who spoke to L’Orient-Le Jour, the decision to halt the raid was made by Tannous’ suvervisor, Ghassan Oueidat, the country’s chief prosecutor.

The same source said that the decision was justified by the need to preserve economic and political stability in Lebanon. In a country, where senior judges often have strong political connections, Oueidat is not an exception to the rule.

A Sunni, the most senior public prosecutor is seen as close to the Hariri camp, one of the main political supporters of Riad Salameh.

The stakes were high, as the search aimed to trace back some of the suspicious transfers that had prompted Switzerland’s attorney-general to investigate “money laundering in connection with possible embezzlement to the detriment of the Banque du Liban.”

The Swiss investigators are looking into transfers made as part of a brokerage deal between BDL and Forry.

Between 2002 and 2014, the company allegedly received more than $330 million in brokerage fees transferred from an account at BDL, according to information provided as part of Switzerland's request to Lebanon in January 2021 for judicial assistance in the probe by the Swiss attorney general’s office.

Of the $330 million, some $258 million were transferred to Swiss accounts allegedly belonging to Raja Salameh, of which $207 million landed in his accounts in five banks in Lebanon; namely, Bankmed, Band Audi, Bank Misr Liban (BML), Credit Libanais, and Saradar Bank.

In April 2021, the Lebanese prosecution also took up the case, and it was in this context that Tannous wanted to search the implicated banks.

Notably, at the time covered in the Swiss probe, Saradar Bank was part of Bank Audi’s Saradar Group, and Saradar was therefore not targeted by Lebanon in its investigation. On the other hand, Al-Mawarid Bank features in the Lebanese investigation, although it is not cited in the Swiss complaint.

Mikati on the defensive

In response to suspicions of public funds embezzlement, Riad Salameh told the French daily Le Figaro in April 2021 that there was major confusion between the funds belonging to the Banque du Liban and those that are transferred through it — a version also defended by the BDL press office, which told L’Orient-Le Jour back in October that the account in question “does not belong” to the central bank but is simply registered there.

“The difference is important, because it is an account hosted at BDL, which means that there are no funds belonging to the central bank or its budget that are included in these operations,” Riad Salameh added.

As for the origin of his fortune, the governor has repeatedly said that his assets, estimated by him to be $23 million in 1993, were accumulated before he took up office at BDL, when he was investment banker.

Several local media outlets reported that Oueidat acted at the order of Prime Minister Najib Mikati, but the chief prosecutor did not respond to L’Orient-Le Jour’s request for comment.

Mikati, for his part, has denied interfering in the work of the judiciary, or acting to defend certain individuals. He, however, admitted to having insisted on “the preservation of institutions and the application of judicial standards, which includes preserving the rights of depositors, and not to undercut what remains of the country’s economic and financial pillars,” while making a speech during an event related to environment issues that was held on Wednesday.

Contacted by L’Orient-Le Jour, the premier’s press office did not respond to requests for clarification on Mikati remarks in the framework of the suspension of the search.

In an interview with the Lebanese daily Al Modon on Thursday, Mikati went as far as to describe Tannous’ methods in storming into the bank to request the documents accompanied by armed security forces as worse than Israeli practices.

“Even when Israel invaded Beirut, [soldiers] did not enter into institutions with weapons in this way,” Mikati said.

L'Orient-Le Jour contacted Bank Audi, which stated that the bank “has always been cooperative with the official authorities – whether judicial or the police – in accordance with legal provisions,” while BankMed said it has no knowledge of a recent raid on its premises. For their part, BML, Crédit Libanais and Al-Mawarid did not respond to L'Orient-Le Jour’s requests for comment.

Although it “runs counter to the proper functioning of the justice,” the decision to suspend the search does not go against the law, Legal Agenda head Nizar Saghieh said.

“The public prosecutor is entitled, under the Penal Code, to put a search on hold, without having to provide any justification. Having the right to do something could, however, be done in an abusive way. This is what is happening with the investigation,” he added.

Since day one, the Lebanese investigation into the central bank governor has been hampered over and over again. On Sept. 15, the Court of Cassation granted Riad Salameh and all BDL employees immunity in any case related to violations of the Code of Money and Credit, which regulates banking activities, except upon the central bank’s request. However, this ruling does not involve breaches of the Penal Code, which are part of the charges against him in the Lebanese probe.

The investigation was suspended less than two months later, after BankMed lodged a complaint on Nov. 3 against the Lebanese state through its lawyer, Rachid Derbas, who served as social affairs minister from 2014 to 2016 in the Tammam Salam-led government. This time, the complaint cited banking secrecy.

Derbas contended that a “gross conduct” had been made on the part of Judge Tannous in requiring access to the accounts of Raja Salameh.

“Pursuant to Fighting Money Laundering and Terrorist Financing, Law 44 of 2015, it is up to the Special Investigation Commission to lift banking secrecy or not, based on information it receives,” the lawyer told L'Orient-Le Jour.

Bringing the Special Investigation Commission, an institution tasked with fighting financial corruption, into the probe would introduce serious potential for conflicts of interest, since it is headed by Riad Salameh himself.

However, for other jurists, who base their arguments on Article 7 of the Law on Illicit Enrichment of 1956, banking secrecy does not apply here. The article provides for an automatic lifting of banking secrecy and a reverse onus, which means that “politically exposed persons,” defined as individuals entrusted with a prominent public function, need to justify the origin of their wealth. Pursuant to this provision, Judge Tannous requested that the banks hand over Raja Salameh’s statements of accounts.

The Court of Cassation blocked BankMed's legal action pro-forma, ruling that the bank does not have the jurisdiction to decide on banking secrecy, since it is only a third party in the probe.

The probe resumed at the end of the year, for a few days, before the introduction of new hurdles.

“We are witnessing a new illustration of a system of impunity where the most influential persons always manage to evade justice. It has been over a year since the Salameh case was opened, and every time a step forward is taken, new obstacles arise. It is déjà vu, similar to the port case in which great pressure is exerted to prevent the judge from doing his job,” Saghieh said.

The probe led by Judge Tannous is far from being the only one targeting Riad Salameh. In Europe, the BDL governor is being investigated by the justice system in several countries, including France which opened an investigation in June, mainly into his real estate assets. More recently, Luxembourg and Liechtenstein opened cases into the governor and his entourage.

In Lebanon, Ghada Aoun, the Mount Lebanon Appellate Court public prosecutor, who is close to President Michel Aoun, one of the governor’s main detractors, issued on Tuesday a travel ban against Riad Salameh as part of another case, in response to a complaint lodged by several lawyers in the “People Want to Reform the System” group.

The central bank governor was also ordered to appear before the judge on Thursday, which he ultimately did not do, and his lawyer requested that Ghada Aoun be dismissed from the case. Nevertheless, the latter set a new date for a new hearing on Jan. 18.

The governor still appears to have the backing of the United States, which reportedly fears that his ousting would bolster Hezbollah and its allies. The local al-Joumhouria newspaper reported on Wednesday that US Ambassador to Lebanon Dorothy Shea asked Parliament Speaker Nabih Berri “to stop any dangerous behavior against the governor, since it is important to keep him (in his post) at the moment.” The ambassador categorically denied these remarks on the same day.

What happened on Tuesday morning in one of Lebanon’s largest banks resembled a scene from a bad television series.On that day, Jean Tannous, a deputy prosecutor at the Court of Cassation, Lebanon’s highest criminal court, in charge of an investigation targeting central bank Governor Riad Salameh on suspicion of “misappropriation of public funds, illicit enrichment, money laundering and tax...