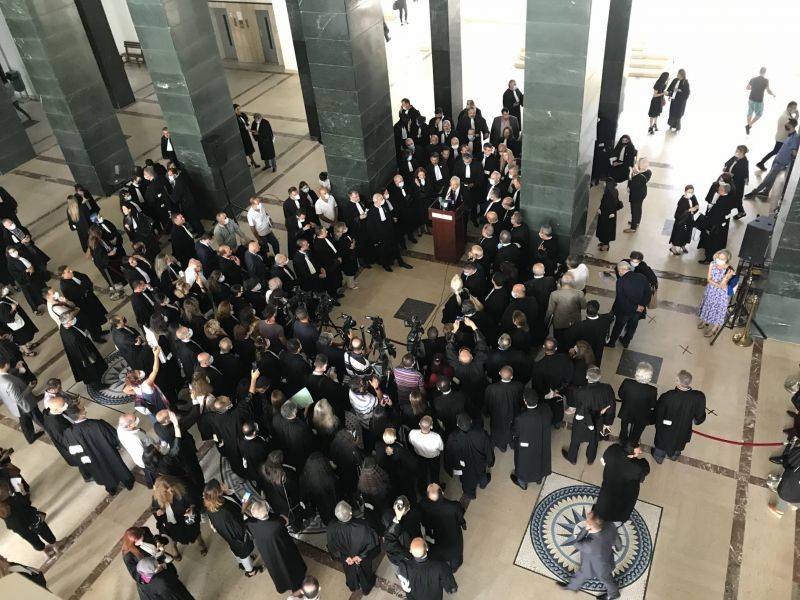 Lawyers gather in the Beirut Justice Palace during a "Day of Solidarity" in July. (Credit: Claude Assaf/OLJ)

BEIRUT — Elections are set to take place tomorrow to choose new council members for the Beirut Bar Association and a successor to outgoing President Melhem Khalaf. This is the first election in two years for the attorneys’ association, as last year’s council vote was postponed due to the COVID-19 pandemic.

Karim Nammour, a lawyer and researcher at the Legal Agenda, said the elections are significant, as they “can also be an indicator of the outcome of the upcoming parliamentary elections.”

The 2019 elections that brought in Khalaf, who ran as an independent, were seen at the time as a sign of the public’s readiness to reject traditional political parties.

The Beirut association represents all lawyers in Lebanon except in the north, which the Tripoli Bar Association represents. This year, nine seats are up for grabs on the association’s council in the first round of voting, followed by a second round to choose the president. All registered lawyers who have paid their dues are eligible to vote in both rounds.

Those vying for leadership include a mix of independent and establishment party figures. Thirty-eight candidates are running for the council posts, of whom nine are also running for the president’s seat. The presidential candidates are: Abdo Lahoud, Alexandre Najjar, Fadi Barakat, Michel Eid, Tanios Eid, Wajih Massaad, Moussa Khoury, Ramzi Haykal, and Nader Gaspard. 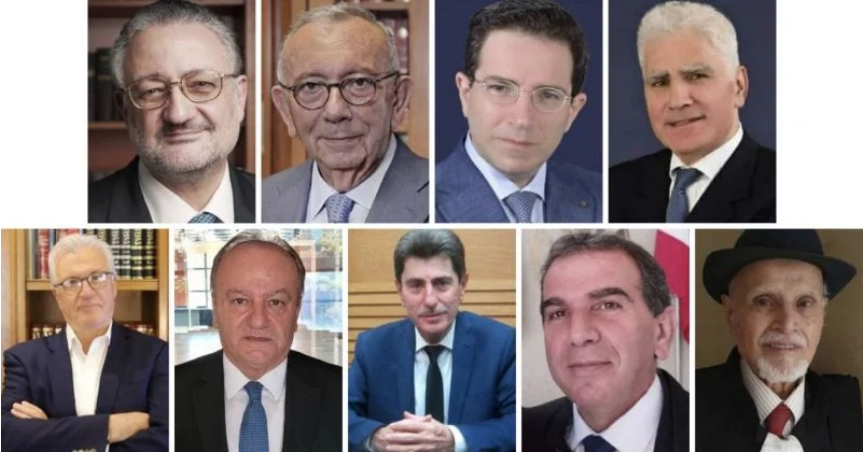 Among those affiliated with establishment parties, Gaspard came in second in the race for the presidency in 2019, when he was supported by the Future Movement and the Free Patriotic Movement, ultimately losing out to Khalaf. While Lahoud is backed by the Lebanese Forces, Najjar, a French-Lebanese jurist, is supported by the Kataeb party.

Barakat, who is a member of the FPM, has yet to receive his party’s support. The Future Movement has yet to announce which candidate they will support,

Speaking to L’Orient Today, Bilal Abdallah, a Progressive Socialist Party MP from the Chouf, said the party will not be supporting anyone.

Likewise, the FPM does not intend to endorse anyone, MP Ziad Aswad (FPM/Jezzine) told L’Orient Today, noting that despite being a member of the party, Fadi Barakat is running of his own accord. Both lawmakers cited the economic circumstances of the country and their effects on the lawyer's profession as the reason why their parties were not officially taking part in the campaigns.

A Future Movement spokesperson did not respond to requests for comment.

In order to move into the second round, eligible candidates have to be elected to the council first, and there is uncertainty over which alliances will be formed in the lead-up to the runoff.

Additionally, there is no clear pick among the opposition ranks over who is to represent them. In October, L'Orient Today's sister publication L’Orient-Le Jour reported that Karim Daher, a professor of Law at Saint Joseph University, would run as the consensus candidate, but he later withdrew his candidacy, citing the lack of a united opposition front.

Both Khoury and Haykal represent alternative currents, but with different political alignments. Khoury is the co-founder of the leftist Citizens in a State along with former telecommunications and labor minister Charbel Nahas, while Haykal is backed by the centrist National Bloc and has worked for BBAC Bank, which has been a sticking point among some in activist circles:

There are fears that the votes could be split as a result. Unlike in 2019, when Lebanon was fresh off the heels of the October 17 Revolution, this year’s elections are taking place under less than ideal circumstances for opposition candidates. Both the COVID-19 pandemic and the Lebanese financial crisis have taken their toll on lawyers, with some joining the waves of Lebanese professionals emigrating abroad.

On top of that, economic difficulties have impeded many attorneys from paying their yearly dues of LL800,000, which are required to be in good standing to vote. LBC reported that while there are some 8,500 lawyers who are members of the bar, only the 7,400 who have paid their dues are eligible to vote.

Furthermore, many lawyers who live in outlying areas may be deterred from showing up to the headquarters in Beirut because of soaring gas prices. But Nammour said this won’t deter hardcore supporters from voting.

He noted that this election cycle is significant from a policy perspective as well as a symbolic one because “whoever wins will set the tone for what judicial and legal battles will be pursued, such as going after the banks and defending depositors' rights.”

“We saw the important role the BBA played during Mr. Melhem Khalaf’s mandate, whether regarding Article 47 of the Code of Criminal Procedures and lawyers’ access to police stations or regarding the Beirut port explosion’s ongoing investigation and the defense of survivors and victims,” he added.

Under Khalaf, the association has taken on a more active role in protecting the rights of defendants. In the wake of the blast, it assigned lawyers to support the victims and ensure they could claim their full rights. It also asked authorities in Britain to prevent the dissolution of Savaro Ltd, the UK-registered firm suspected of importing the ammonium nitrate that detonated in the blast, in a bid to prevent the entity from evade criminal proceedings.

The association has also followed up on the cases of many Roumieh prisoners, in addition to pressing for the right of defendants to have their lawyers present in detention during questioning.

Nammour emphasized the importance of the role the association plays, “given the nature of the profession it represents, its influence on the judiciary, legislative, and governmental decisions and actions.”

“Imagine how large its impact could be with accountability and on how laws are written and implemented,” he said.

BEIRUT — Elections are set to take place tomorrow to choose new council members for the Beirut Bar Association and a successor to outgoing President Melhem Khalaf. This is the first election in two years for the attorneys’ association, as last year’s council vote was postponed due to the COVID-19 pandemic. Karim Nammour, a lawyer and researcher at the Legal Agenda, said the elections are...