Here’s what happened yesterday and what to expect today, Wednesday, Nov. 3 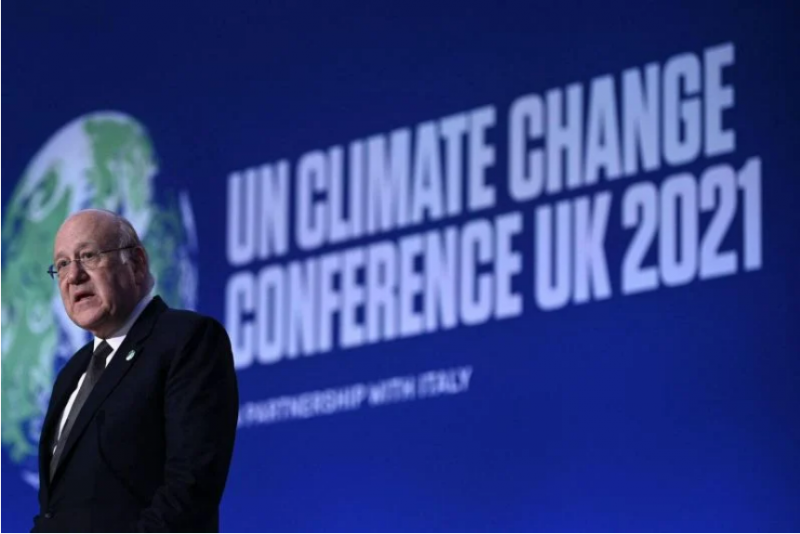 Prime Minister Najib Mikati said he fears climate change will “exacerbate” the myriad of challenges Lebanon is confronting. During his speech at the COP26 UN conference on climate summit, Mikati expressed his concerns that climate emergencies will obstruct Lebanon’s economic and social progress at a time when the country’s social fabric is being torn apart by a financial crisis that has pushed 78 percent of the population into poverty. Meanwhile, on the sidelines of the conference, Lebanon’s political and economic challenges overshadowed talk of addressing climate change as for a second consecutive date the premier met with assorted foreign and international leaders. US Secretary of State Antony Blinken said he had a "productive" meeting with Mikati and reaffirmed Washington’s commitment to "support" Lebanon. “We discussed the need to implement urgent reforms to address Lebanon’s economic crisis and to hold free and fair elections next year,” he tweeted following the exchange. Meanwhile, in an apparent attempt to extend an olive branch to Saudi Arabia amid an ongoing diplomatic crisis, Mikati said he appreciates Saudi Arabia’s “keenness to launch the Green Middle East Initiative.”

The diplomatic rift between Lebanon and Saudi Arabia that broke out last week shows no signs of abating. Lebanon’s foreign minister yesterday told Reuters that Saudi Arabia is forcing impossible terms on the Lebanese government by asking it to weaken Hezbollah’s role in the country. “If they just want Hezbollah’s head on a plate, we can’t give them that,” Reuters quotes Abdallah Bou Habib as saying, adding that the minister has instead called on the Saudi government to engage in dialogue with Lebanon’s new cabinet. Meanwhile, the reverberations of Lebanon’s Information Minister George Kurdahi’s comments, which unleashed the spat when they were broadcast last week, continued to ripple through the Arab Gulf. Yemen yesterday summoned its ambassador to Lebanon for consultations over Kurdahi’s remarks in support of the Iran-aligned Houthi rebels in the country, saying in a statement that the country “will continue to reject the Iranian project” until Yemen becomes “a beacon of stability in the region.” Separately, having already joined Saudi Arabia, Kuwait and the United Arab Emirates in severing diplomatic ties with Lebanon over the incident, Bahrain released a statement yesterday encouraging its citizens to leave Lebanon “immediately,” and reiterated its notice for citizens not to travel to Lebanon.

President Michel Aoun told a delegation from the European Parliament that Lebanon’s legislative elections will be held “on time.” According to his office, Aoun said in the meeting that plans are “underway to hold parliamentary elections on time in a context of freedom, democracy, and openness”; however, the president’s statement did not make clear on which date — March 27 or May 8 — he expected voting to take place. The Free Patriotic Movement, which Aoun founded, opposes bringing the date forward to March 27, but Parliament has now twice voted in favor of the earlier date, after the president sent the proposed law back to the legislature following the first vote. FPM leader and Aoun’s son-in-law MP Gebran Bassil stated he would file an appeal against the date change at the time of the first parliamentary vote and departed the Parliament session in apparent anger, along with the other deputies from his party, after the second one. Aoun’s office also said the president told the European delegation that preparations are underway to begin negotiations with the International Monetary Fund on a plan to help Lebanon exit its crippling economic crisis.

Judge Tarek Bitar reportedly promised the families of the firefighters killed in the 2020 Beirut port blast that he would not be influenced by political forces. The families’ spokesperson William Noun told L’Orient Today that Bitar, who met with the families yesterday at the Justice Palace, assured them that he will continue his investigation into the explosion “till the end.” Last month, Ibrahim Hoteit, former spokesperson for the families of the victims of the blast, in an abrupt about-face, called for Bitar’s resignation after the Oct. 14 Tayyouneh clashes, which broke out as demonstrators gathered to take part in a Hezbollah and Amal Movement organized protest against the judge’s “politicization” of the probe and which left seven people dead and more than 30 wounded. In a series of video statements, Hoteit withdrew his support from Bitar, saying he was concerned that the judge was being pressured by political forces. Some observers asserted that Hoteit had changed his stance because he was threatened, which he has denied. Since then, Hoteit has claimed to have formed a splinter group with some of the other victims’ families, but it is not clear how many joined him. In response to Hoteit’s claims, the original group of families of the victims released a statement reaffirming their confidence in Bitar’s investigation and reiterated their support for him.

Prime Minister Najib Mikati said he fears climate change will “exacerbate” the myriad of challenges Lebanon is confronting. During his speech at the COP26 UN conference on climate summit, Mikati expressed his concerns that climate emergencies will obstruct Lebanon’s economic and social progress at a time when the country’s social fabric is being torn apart by a financial crisis that has...