Lebanon’s economic crisis is keeping hunters out of the woods 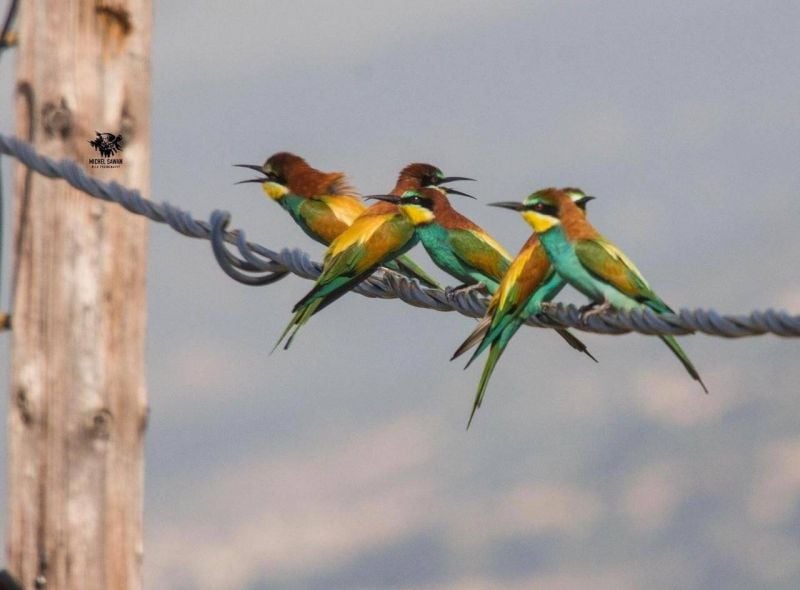 BEIRUT — Lebanon’s economic crisis has had a silver lining for at least some residents of the country — the birds.

With the price of bullets skyrocketing, both legal and illegal hunters are cutting back on their activities.

Lebanon’s hunting practices make the country one of the most dangerous areas for migrating birds, especially with the country having the 9th highest rate of small-arms ownership in the world as of 2017, according to the Small Arms Survey, a Geneva-based research project.

BirdLife International, a global partnership of non-governmental organizations working for bird conservation, describes Lebanon as a “black hole” where almost 2.6 million birds disappear every year, shot or trapped illegally. The prolific hunting has sparked diplomatic friction between Lebanon and Poland, due to the large number of white storks — considered a national symbol in Poland — that are shot down while migrating over the Lebanese territory.

In 2018, 58 conservation organizations from around the world appealed to President Michael Aoun to enforce the protection of migrating birds and “to honor his promise for stricter enforcement of hunting laws.”

Despite attempts to crack down on illegal hunting, the problem has persisted. For many Lebanese, hunting is a tradition passed down from father to son, or a common autumn ritual. And amid the lira’s devaluation, the fee for a hunting permit remains LL100,000, which is still an affordable amount to many. Potential hunters often do not need to show a broad knowledge of hunting. This makes hunting permits accessible and illegal practices more common, according to Michel Sawan, head of the Lebanese Association of Migratory Birds.

Now the economic crisis may have accomplished something that advocates and authorities have tried in vain to do for years.

According to a local hunter who acknowledged that he hunts without a permit, the bullets, which are often imported, cost $27 for a box of 50, which pre-crisis was equivalent to LL40,500 and now is equivalent to about LL432,000, which is more than half of Lebanon’s minimum wage.

“I would rather keep the money to feed my kids, and not risk having no money in case of emergency,” he said when asked if he is still choosing to hunt regularly.

Apart from ammunition, some hunting equipment stores in Lebanon have been selling banned equipment such as nets and electrical machines that mimic the sounds of birds. The local hunter explains that the price of this equipment has quadrupled in less than six months.

Sawan confirmed to L’Orient Today that the downward trends are clear and the economic crisis has indeed triggered a decrease in hunting in Lebanon.

While he did not have statistics on the decrease, Sawan said that bird watchers on the ground had observed the decrease in hunters on several sites and more birds nesting in Lebanon.

Sawan noted that although “illegal hunters, specifically, tend to be an obstinate bunch,” there is no doubt that the cost of ammunition has discouraged many, both legal and illegal hunters.

Speaking with L’Orient Today, retired Brig. Gen. Abdo Berberi owner of “Le Fusil,” a Lebanese company specialized in trading a range of hunting products, including shotguns and ammunition, said that the shop is facing enormous losses and he is now trying to sell it.

“We tried our best not to change our original prices just to invite hunters to commit to the hobby … but the economic crisis has pushed many hunters to put their hunting hobby way below their other financial priorities,” he said.

“I know that other gun shops are also suffering because of the ammunition inflation which has also been compounded by supply chain issues during the early of days of the pandemic,” Berberi said, explaining that the increased costs of raw materials shipping, warehousing and distribution are being passed along to the customer.

Apart from the cost issue, it appears that this year there will be no legal hunting season.

The hunting season in Lebanon, which is set by the Environment Ministry, usually starts at the beginning of September and ends around mid-February, but the start of this year’s decision was delayed due to the government formation process, and now has been canceled altogether.

Now newly instated Environment Minister Nasser Yassin has announced that this year’s hunting season is canceled while his ministry works on reforming Lebanon’s hunting laws and evaluating the environmental impacts.

As a result of the canceled season combined with the cost issue, Berberi said, “I am not going to tell you that I have less clients, because I simply don’t have any at the moment.”

Sawan noted that even the prohibitive costs and canceled hunting season are not likely to stop poaching completely, however.

“Some people’s addiction to hunting is bigger than any economic crisis, and some are actually willing to trade the money they have for their daily meals to buy ammunition,” he said.

Stray bullet deaths may also be on the wane

Last week, a stray bullet hit and killed a 23-year-old woman on the terrace of a restaurant in Kesrouan. Tatiana Wakim was killed while dining after a fight between a number of men ended in gunfire. The shooter allegedly fired in the air in an effort to break up the fight, but one of his bullets hit Wakim in the chest.

It is not unusual for stray bullets from either altercations or celebratory gunfire at occasions like weddings to cause injuries and fatalities in Lebanon. Despite the fact that the Parliament passed Law No.71/2016 in 2016, criminalizing shooting in the air and punishing shooters with imprisonment ranging from six months to three years or a sentence of up to 10 years of hard labor and a fine ranging from 20 to 25 times the minimum wage in the event of death, the phenomenon of celebratory gunfire has remained common.

However, despite the recent high-profile incident, it appears that the number of incidents of people killed and injured by stray gunfire has decreased, which a security source attributed partially to the economic crisis.

According to Beirut-based research center Information International reporting on numbers obtained based on media outlets and ISF reports, stray bullets caused, on average, seven deaths and 15 injuries a year between 2010 and 2021.

An ISF source told L’Orient Today that firearm ownership remains widespread in Lebanon, and the law remains practically unenforced, yet the high cost of ammunition has led to a decrease in some negative behaviors like illegal hunting and celebratory gunfire.

This story has been updated to include the quantity of bullets purchasable for $27.

BEIRUT — Lebanon’s economic crisis has had a silver lining for at least some residents of the country — the birds.With the price of bullets skyrocketing, both legal and illegal hunters are cutting back on their activities.Lebanon’s hunting practices make the country one of the most dangerous areas for migrating birds, especially with the country having the 9th highest rate of small-arms...